Air Canada and WestJet Airlines, Canada's two largest carriers, both reported slight load factor reductions in the shoulder month of Jun-2011, but expressed optimism about a pick-up in demand during the peak summer travel months of Jul-2011 and Aug-2011. The much smaller Porter Airlines, meanwhile, reported 12.4 ppt load factor increase in the month, although its load factors remain more than 10 ppts weaker than its larger competitors. 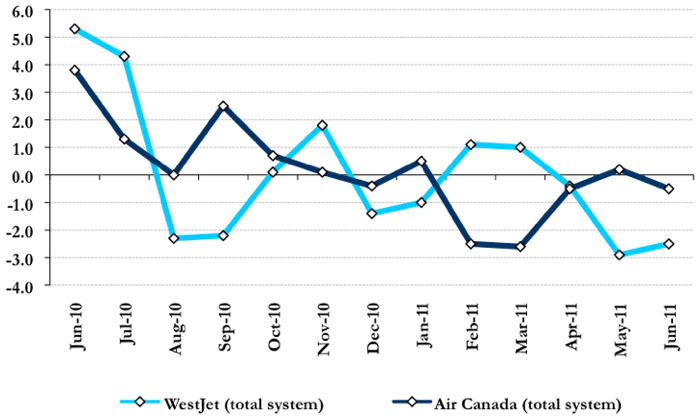 Looking at the next two months, forward bookings at the Canadian carriers appears strong, with a favourable pricing environment, boding well for positive yield, traffic and financial results in the third quarter. Meanwhile, both Air Canada and WestJet are scheduled to report 2Q2011 financial results on 04-Aug-2011. Air Canada, upon the release of its 1Q2011 financial results, stated it expects 1H2011 EBITDAR to increase by up to 5% year-on-year. WestJet, meanwhile, stated it expected continued strong year-on-year RASM growth in 2Q2011.

Commenting on its load factor result for Jun-2011, WestJet President and CEO Gregg Saretsky stated that “although loads were slightly down for June, a shoulder-season month, we are comfortable with the balance achieved between yield, growth and our load factor”.  He continued: “We are pleased with the advanced bookings for July and August, and the pricing environment continues to be strong. With the school year winding down, families are gearing up for summer vacations”. 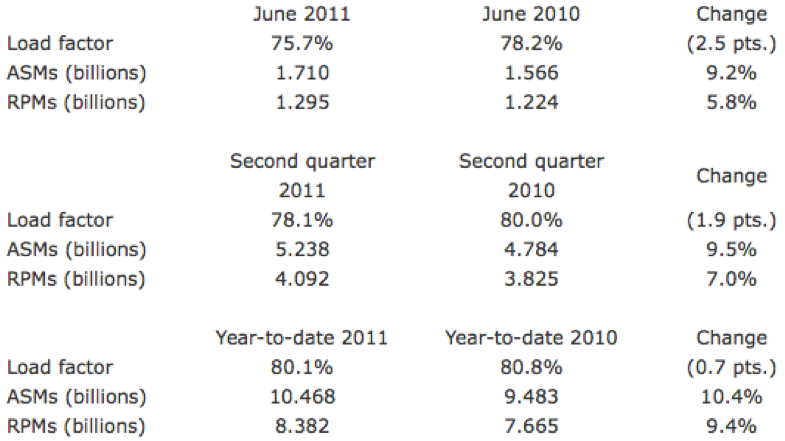 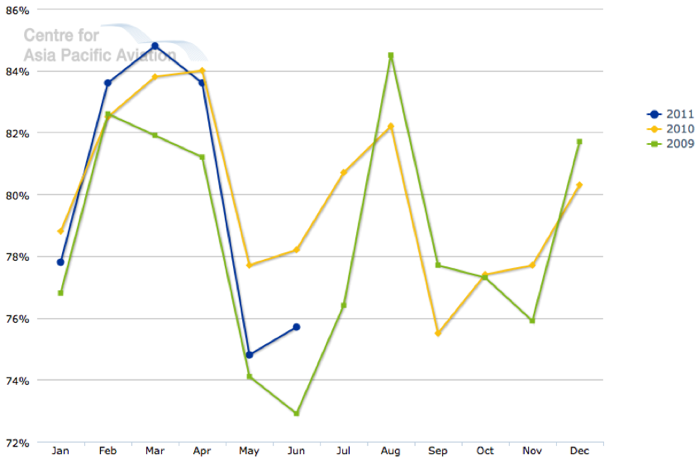 WestJet handled an additional 68,000 passengers in Jun-2011 compared to Jun-2011. Traffic (RPMs) increased 5.8% on a 9.2% increase in capacity (ASMs), resulting in the 2.5 ppt load factor decline to 75.7%.  WestJet’s monthly capacity growth, as is generally the case, was larger than Air Canada’s capacity additions in the month.

Air Canada, meanwhile, reported a load factor that was 8.5 ppts stronger than at WestJet, as has been the case for the past two months. Over the past 12 months, Air Canada has reported stronger load factors than WestJet in nine months, with WestJet’s load factors stronger in four of the past 13 months. 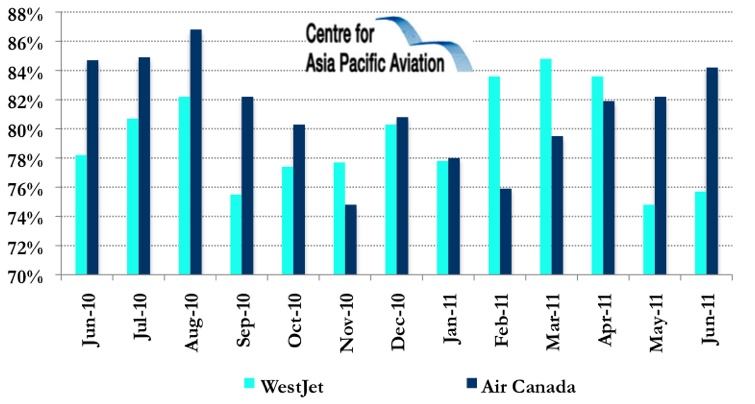 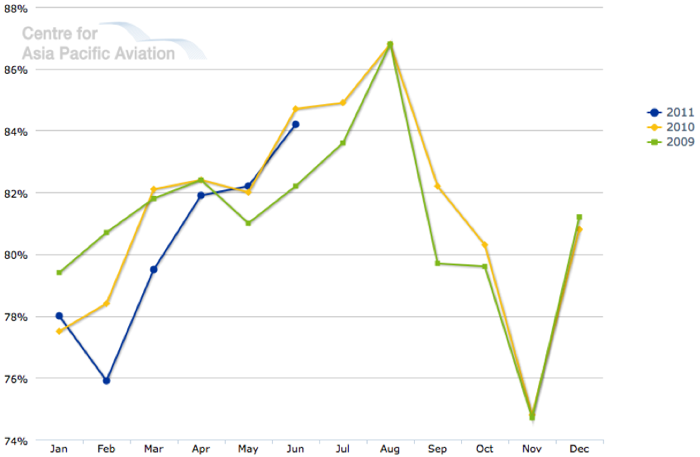 "For the month of June, Air Canada reported a system load factor of 84.2%. Led by an 8.4% traffic increase in Latin America and Sun destination markets, we generated system wide traffic growth of 2.5% on a capacity increase of 3% through higher utilisation of our existing fleet," said President and CEO Calin Rovinescu. "Following on the record load factor we reported for June 2010, these solid results highlight Air Canada's ongoing focus on operating the airline in a disciplined and efficient manner with respect to capacity and asset deployment”.

Like WestJet, Air Canada does not report monthly traffic numbers, although the carrier stated it handled more than 122,000 passengers on 30-Jun-2011, a record for a single day as it heads into the peak summer travel season. 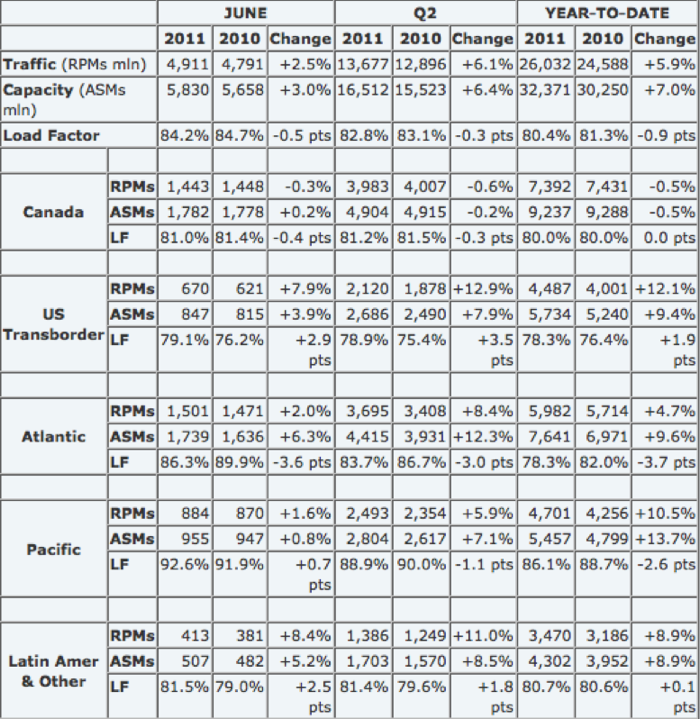 Both Air Canada and WestJet have reported traffic (RPMs) and capacity (ASMs) growth over the past 24 months, although traffic growth at both carriers has slowed from double digit growth 12 months ago to single-digit growth in the past couple of months. 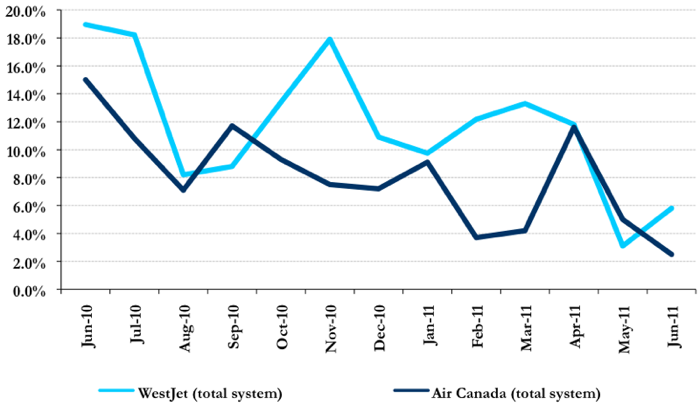 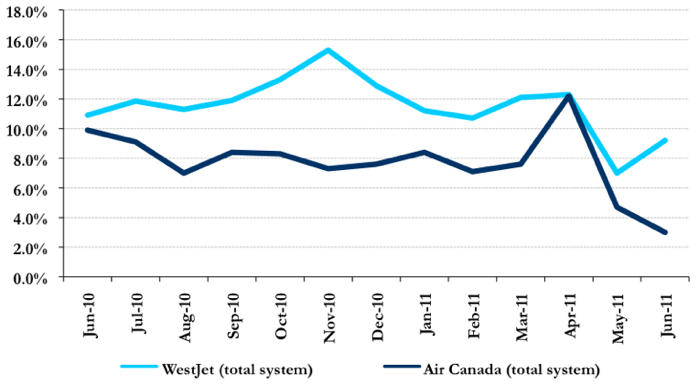 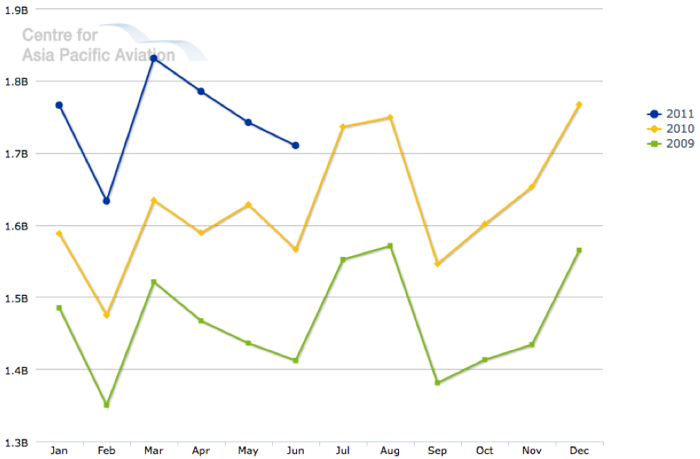 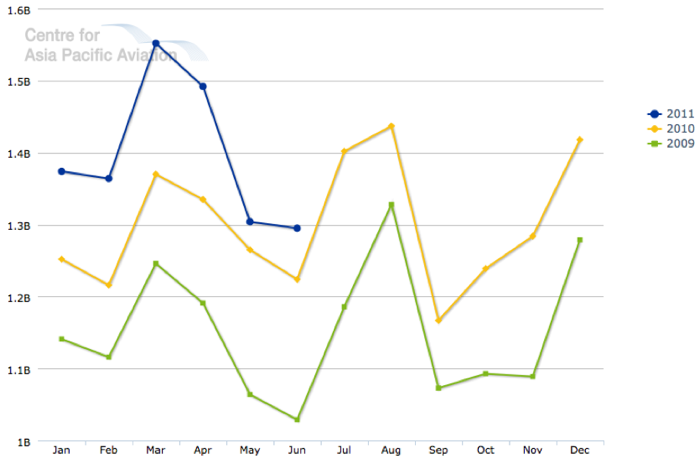 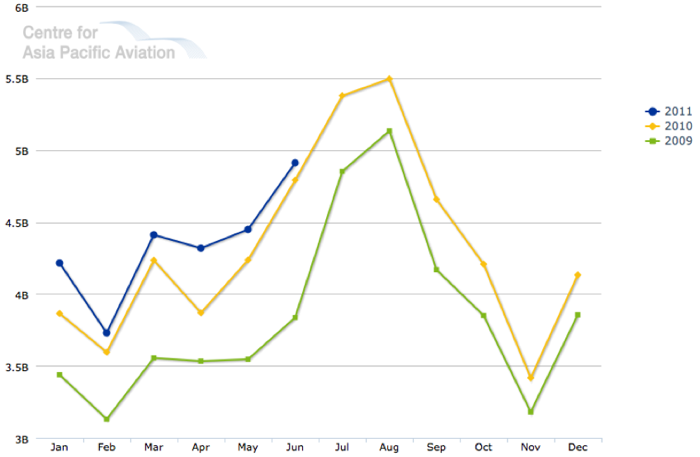 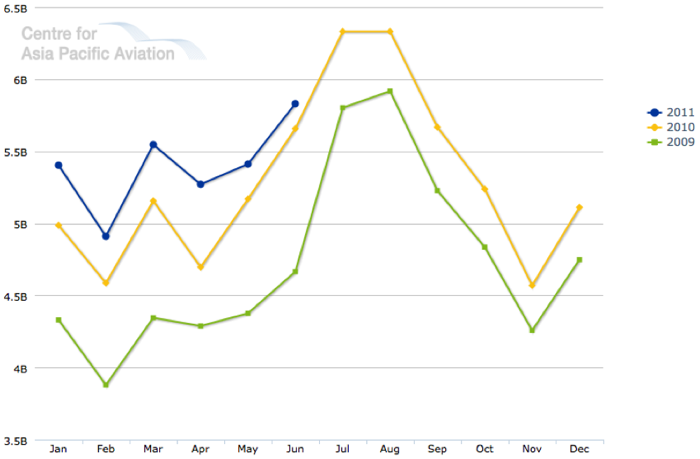 The much smaller Porter Airlines reported a 12.4 ppt load factor improvement to 64.6%, although this load factor is considerably weaker than at WestJet and Air Canada. Load factor on the high-frequency Toronto City-Montreal route also increased 11.7 ppts year-over-year.

Passenger numbers, capacity (ASMs) and traffic (RPMs) set new records for the second consecutive month. More than 203,000 passengers travelled in Jun-2011 compared to 136,000 in Jun-2010. The carrier reported a 19.5% capacity (ASKs) icnreaes in the month, with traffic (RPKs) growth of 47.9%. Like Air Canada, Porter Airlines reported its single bsiest passenger day on 30-Jun-2011, prior to the Canada Day and Independence Day long weekends.

“It’s rewarding for everyone at Porter to see growth like this as we attract more customers by delivering a service-oriented passenger experience, said Robert Deluce, president and CEO of Porter Airlines.

Porter, based at Billy Bishop Toronto City Airport, lost its monopoly at the airport when Air Canada relaunched its service from that airport in May-2011. The carrier operates short-haul flights in eastern Canada and into the US. 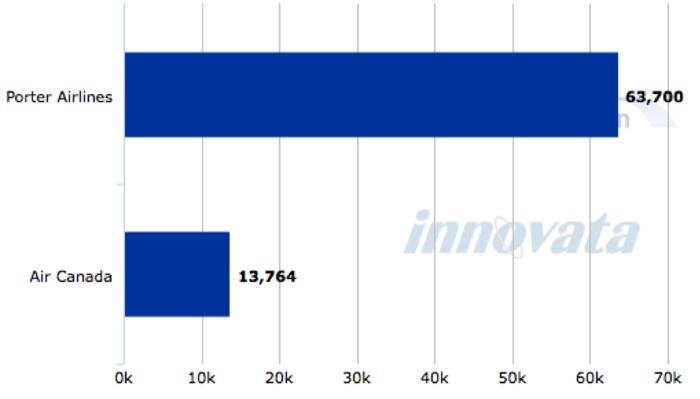