US Airways was again the biggest winner soaring 15.4%, as it reported a healthy 22% surge in RASM last month and enjoyed a technical rally as interest spiked in call options for the stock. The airline’s system traffic rose 2.9% in Jun-2010, against a year-to-date decrease of 0.9%, suggesting conditions are improving.

Soleil Securities reiterated a buy rating on US Airways, increasing its price target from USD12 to USD13 per share, citing better-than-expected June revenue data. Soleil stated US Airways stock is "an especially leveraged way to play an ongoing US airline recovery".

Elsewhere, Air Canada was raised to a “buy” by Versant Partners, citing better-than-expected June traffic results, higher fares and a recent decline in its shares for the upgrade. Versant Partners raised its price target from CAD3 to CAD4 per share but cautioned “an investment in Air Canada remains a higher risk proposition”. 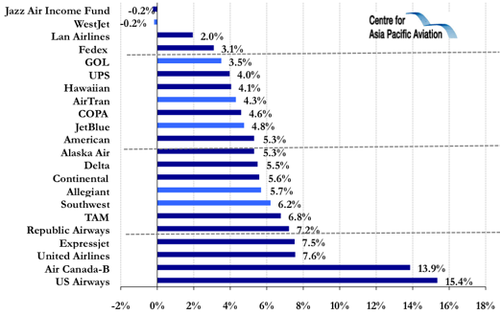