Air Berlin narrowed its net loss to EUR9.5 million in 2009, a considerable improvement from a EUR83.5 million net loss in 2008, as it reduced operating expenses by 6.2% (as a result of the carrier’s efficiency programme), exceeding the 4.4% revenue reduction in the period.

The carrier’s EBTIDAR result improved by 8.4% to EUR504 million, while EBIT reached EUR28.5 million in the 12-month period (up notably from EUR2.0 million in 2008 and higher than the previous-announced forecast of more than EUR14 million).  Shares in Germany’s second largest carrier were up 1.2% yesterday.

Air Berlin has continued to report impressive increases in RASK over the past two years, stemming from its effective capacity deployment plans and acquisitions that have reduced fare competition in some core markets. The LCC has previously stated that its strategy is to focus on maintaining profit margins over building market share although the carrier, with the acquisition of the TUIfly routes, has managed to grow marketshare and unit revenues concurrently.

The carrier, in its month recent monthly traffic release, reported a 3.3% year-on-year increase in RASK to EUR 5.51 cents in Feb-2010, with this coming off double-digit growth of 12.1% in Feb-2009. Air Berlin has only reported two months of RASK reductions in the past two years, an impressive record considering the operating environment. In FY2009, the carrier reported a revenue per ASK increase of 7% year-on-year, to EUR 5.75 cents. 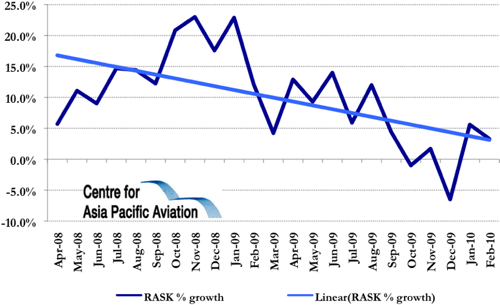 Looking forward, Air Berlin has stated it would strive for higher earnings in 2010, compared to 2008 and 2009 results. To achieve this, the LCC, in Jan-2010, stated it planned to significantly reduce costs and possibly sell aircraft, and is also in talks about partnerships and alliance options, open for new agreements. Progress in all these areas has been in made in 1Q2010 as follows: 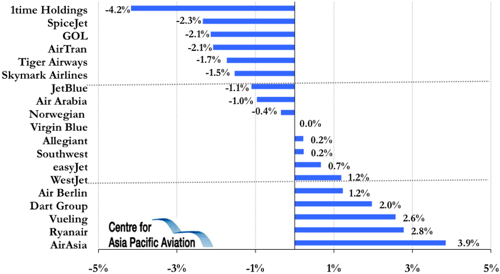