LCC investors reacted again to increased fuel prices, which reached a new high for 2009 yesterday for the third consecutive day. All the major LCC shares were down, with Air Berlin the worst affected, falling 5.7%. Also in Europe, easyJet and Ryanair shares fell 2.7% and 2.1%, respectively.

Elsewhere, Southwest shares were down 0.2%, while GOL’s shares increased the most, up 5.3%.

NB: All these carriers all feature prominently in The Centre’s forthcoming LCC Outlook 2009 report.

Among the Asia Pacific/Middle East LCCs, SpiceJet shares fell 4.1%, while AirAsia shares slipped 2.4%. The reduction in AirAsia’s share price contrasts to the carrier’s continued bullishness regarding its performance prospects for 2009. The LCC forecasts it will handle 24 million passengers in 2009, with a 21% increase in passenger traffic forecast for 2Q2009, matching its rise in passenger traffic in 1Q2009. The carrier reported a bumper 26% increase in net profit to USD58 million in the typically slow first quarter, for the carrier’s best quarterly result since the final three months of 2007, but the outlook for the second quarter is decidedly less buoyant as fuel prices surge. 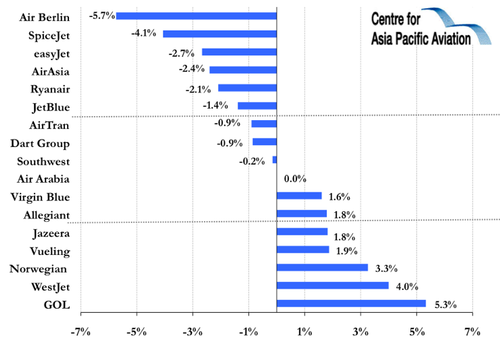