LCC ownership continues garner headlines around the world, with Germany and Thailand in focus today with moves by Air Berlin to increase its stake in NIKI and Thai Airways to do likewise at Nok Air.

NB: You can keep in touch with all LCC ownership news from around the world every morning with Peanuts Daily. Sign up today - it's free for a limited time!

Air Berlin in negotiations to raise stake in NIKI;

Air Berlin (shares up 1.8%) yesterday confirmed it is in “advanced negotiations” regarding the increase of Air Berlin PLC's shareholding in NIKI Luftfahrt GmbH. The negotiations have not been completed yet and Air Berlin PLC has not yet obtained the approval of its Board of Directors. A board meeting is scheduled for today to discuss the matter.

According to reports in Der Standard, Germany’s second largest airline is seeking to raise its stake in NIKI from the current 24% to 49%. The move follows Lufthansa’s recent acquisition of Austrian Airlines. Niki Lauder stated he would make an important announcement at his company's annual earnings news conference on 18-Feb-2010.

Thai plans to increase cooperation with Nok, and ultimately hand over the majority of its domestic services to the LCC. Approximately nine of Thai’s 12 domestic routes are no longer profitable due to high costs and increased competition from LCCs, including Thai AirAsia. Thai Airways’ shares fell 0.5% yesterday. 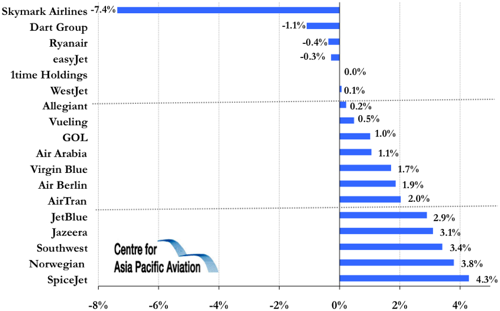