Air Arabia (-1.0%) was down despite confirming during trading that its Board of Directors approved the payment of a cash dividend of 10% of the company's share capital for 2009 at its third Annual General Meeting (AGM). Air Arabia, now into its sixth year, broke even in its first year of operations and has reported steadily increasing profits and industry beating profit margins ever since.

Also in the Middle East, Kuwait National Airways (-1.9%) was also down, while Royal Jordanian was flat.

In Africa, Lonrho (-4.0%) made the biggest fall of the day. Subsidiary, Fly540, is reportedly planning to widen its market presence in Uganda and is considering new destinations from Entebbe. The carrier's service in Luanda is also reportedly "imminent". The carrier is also planning to launch services from Zimbabwe in 2010.

Conversely, Kenya Airways (+3.2%) continued what has been a strong rally since Monday, moving higher with Kenya’s All-Share Index (+0.1%). Kenya Airways’ gain occurred despite the country’s Tourism Minister, Najib Balala, stating during trading that Kenya should provide financial incentives to airlines operating to the country, to increase tourist arrivals and international tourism revenues in the country, which would effectively increase competition for the flag carrier.

Tourism contributed USD805 million to the Kenyan economy in 2009, with Mr Balala stating the Ministry requires USD26 million to boost visitor arrivals to 2 million p/a by 2012. There were 1.2 million visitors in 2008, down from 1.8 million in 2007, with the country facing competition from South Africa, Egypt and Zanzibar.

1time Holdings (+2.5%) was also up, benefiting from reporting a net profit of USD11.3 million the day prior. 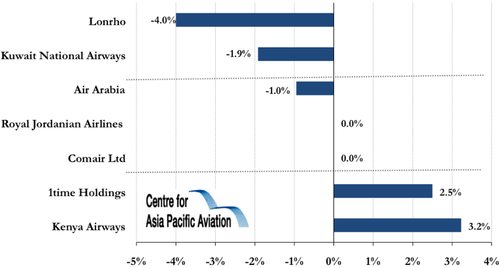