Aeromexico is looking to leverage its significantly improved competitive position and financial outlook by pursuing an initial public offering (IPO) which will help fund the next phase of its expansion plan.

The airline group’s fortunes have dramatically improved over the last year, following a successful restructuring and the exit of its archrival, Mexicana. Grupo Aeromexico now has a 42.6% of the Mexican domestic market, based on Feb-2011 data from Mexico’s DGAC, compared to only a 34.1% share in Feb-2010.

Grupo Aeromexico also has seen its share of Mexico’s international market grow from only 27.8% to a commanding 79.1% during the same period.

Aeromexico earlier this week unveiled plans for an IPO which is expected to raise about MXN2.7 billion (USD226 million) later this month. An IPO has been part of the long-term plans of Citigroup arm Banamex since the Mexican bank acquired Aeromexico from government holding company Cintra in 2007. But only a year ago an IPO was considered highly improbable given the airline’s poor financial performance and the intense and often irrational competition in the Mexican market.

From 2007 to 2009 yields in Mexico steadily eroded and load factors remained relatively low compared to the rest of Latin America. Aeromexico was affected domestically by the rapid growth of low-cost carriers while internationally rapid expansion by Mexicana resulted in new competition in some of its most profitable markets. In 2009 the outbreak of H1N1, which originated in Mexico, and the global economic downturn also impacted traffic and yields.

While Mexicana continued to pursue aggressive expansion in 2009 despite the brutal conditions, a decision which ultimately contributed to its demise, Aeromexico decided to downsize. The group elected to cut capacity, in particular on US routes, along with its fleet and workforce.

The restructuring as well as slight improvement in market conditions allowed the leaner Aeromexico to start turning the corner in early 2010, enjoying for the first time in several years a profitable first half. With Mexicana suspending operations in August, Aeromexico’s finances improved even further. Aeromexico ended 2010 with a net profit of MXN2.4 billion on revenues of MXN28 billion.

Mexicana’s exit also prompted Aeromexico to quickly resume fleet and network expansion. In the fourth quarter of last year the carrier added three B737s and one B767, which were used to increase capacity in markets vacated by Mexicana. The equivalent of another seven to eight aircraft was added by increasing average utilisation of the existing fleet from 12 to 14 hours per day. Aeromexico also moved the three Boeing MD-80s at its Aeromexico Travel unit from charters to the domestic scheduled market.

Aeromexico’s rapid expansion domestically as well as expansion at low-cost carriers Interjet, Volaris and VivaAerobus allowed Mexicana’s void to be completely absorbed in only a few months. In February total domestic scheduled traffic in Mexico was up year-over-year by 0.5% to 1.71 million passengers despite the exit of Grupo Mexicana, which had a 29.6% share of the market in February 2010.

Following Mexicana’s exit Aeromexico also started working on a new medium-term business plan to exploit its improved competitive position particularly in the international market, where so far the Mexicana void has been filled primarily by foreign carriers. In December, Aeromexico forged a new agreement with its pilots covering the addition of 25 aircraft. In announcing its IPO plans this week, Aeromexico said some of the funds raised would be used to partially cover the acquisition of 20 additional aircraft, valued at 16 billion pesos. This includes 10 more Embraer E-190s and 10 more B737NGs.

The B737s will be operated by Aeromexico mainline, which currently operates 40 B737-700/800s with another 10 B737-700s, according to Ascend data. The current mainline fleet also includes six B767s and four B777s with five B787s on order. The additional E-190s will be operated by regional unit Aeromexico Connect, which currently operates a fleet of 39 ERJ-145s and eight E-190s with nine more E-190s on order. 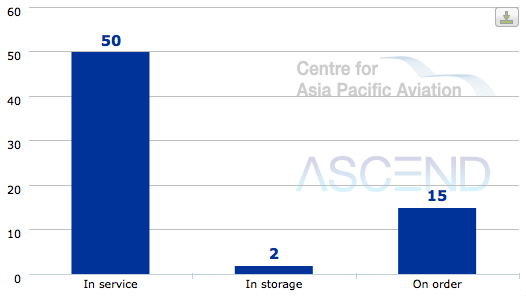 Aeromexico also has resumed network expansion since Mexicana’s exit, adding markets in both North and Latin America. Aeromexico says at least five more destinations will be added later this year – Caracas, Guatemala City and Panama City in Latin America as well as Fresno and Sacramento in California.