European markets mostly took their lead from the previous day’s downturn on Wall Street, where a renewed bout of optimism in fact boosted shares later on Thursday (even though most US airlines failed to benefit from the general upward movement). 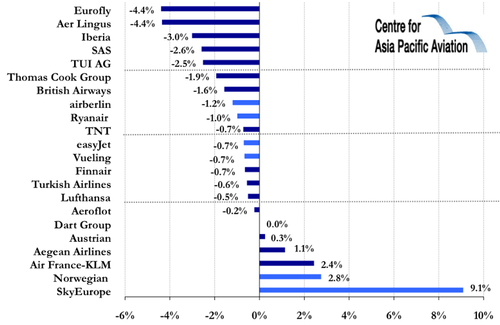 Aer Lingus’ board meeting, to be held on 05-Jun-09, is shaping up to be a fiery affair, as Ryanair CEO, Michael O’Leary, representing 29.8% of the Irish flag carrier’s voting stock, has put forward proposals which are sure to be controversial – and indeed are clearly intended to be so. Resolutions to reduce the Chairman’s and board salaries will rock the boat. Earlier this week, the board responded, recommending rejection.

Coupled with a grim outlook for the airline, currently without a permanent CEO, it is not only Mr O’Leary giving cause for concern. The Irish government still owns 25% of Aer Lingus and the next largest shareholder is the Employee Share Ownership Trust (ESOT), with a 14% stake. The ESOT will perhaps be under some pressure to support frugality in board remuneration which would clearly polarise the situation, if other another 6% or so of shareholders felt similarly inclined – a prospect which appears to have prompted the board’s recommendation to reject the O’Leary resolutions.

In December last year ESOT had discussed with Ryanair the latter’s offer to pay EUR1.40 per share to buy the remainder of airline. This was precisely half the price which Ryanair had offered two years previously.

Chairman and now acting CEO at the time described the later offer as a rip off.  But, with hindsight, many investors might like to have accepted if they could have their time over.

Mr O’Leary has said that he will not make another offer for Aer Lingus, but with just a little more turbulence, the future of the airline must become fundamentally destabilised. Next week’s AGM could well prove to be a determining event in the future of the historic Irish flag carrier.

The contracting LCC reported a “significant” improvement in the first half of 2009, reflecting its capacity rationalisation and helping push its share price upwards. But most of the good news related to the full half, rather than to the critical most recent quarter, even allowing for Easter falling outside the quarter this year.

But the capacity rationalisation kicked in, as load factors increased 3.6% in the recent quarter, against 1.1% for the full half. Along with many of its competitors, ancillaries more than doubled in the full half (no 1Q09 figure available).

Fleet issues are now apparently to be resolved imminently, as the “replacement fleet plan to substitute the aircraft returned in January (is) already in place: three Boeing 737 classics already delivered and flying with an additional three leases signed and expected for delivery before the end of May 2009” – ie this week.

According to CFO, Nick Manoudakis, "we have eliminated much of the downside risk in our business and have seen benefits coming through from greater network maturity and the consolidation of routes from our bases in Vienna, Prague and Bratislava. We look forward to further improvement in the second half of the year and beyond."