Aer Lingus CEO: Government will not sell to Ryanair

Shares in UK aviation services and distribution group Dart Group rose 2.3% yesterday. The company, which control UK carrier Jet2.com, is due to release the interim results for half year ending 30-Sep-2010 later this month.

Shares in Lufthansa were up 1.7%. The company signed a codeshare agreement with Avianca, bringing the Colombia's national carrier closer towards integration with the Star Alliance. Lufthansa also confirmed that it is eyeing SAS as a possible acquisition target, but is taking a long-term approach to any purchase, given the carrier’s debt level and potential price.

easyJet shares were up 1.3%, while airberlin was up 1.2%. Ryanair shares lost 0.4%, with the carrier reporting strong traffic growth. Aer Lingus shares dropped 1.3%. The CEO of the Irish national carrier, Christoph Mueller, stated that the Irish government has no intention of selling its ownership stake in the carrier to Ryanair due to competition issues. According to the CEO, the government will only sell its EUR150 million stake in the carrier to a party that guarantees the independence of the airline. 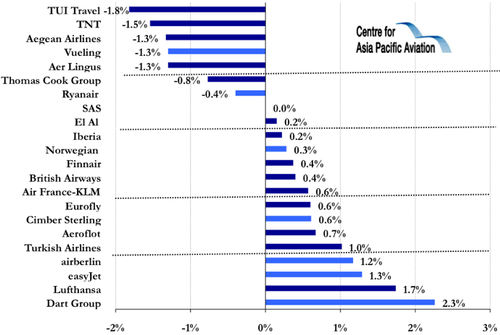