Aegean Airlines' good results continue in 3Q2014, but competition with Ryanair is growing

The Aegean Airlines Group's string of good financial results continued with 3Q2014 operating profit increasing by more than a quarter compared with the same period a year earlier (based on proforma figures with Olympic in the comparable). Aegean is growing its capacity at a double digit rate, with particularly strong growth in the domestic market and on international routes from Athens, just as Ryanair is expanding rapidly in Greece. This has led to downward pressure on yields and RASK, but Aegean has successfully cut CASK even more quickly to drive up its margins.

Competition between Aegean and Ryanair looks set to intensify in 2015, when the battle may extend to Cyprus, regardless of whether or not one of them is successful in biding for Cyprus Airways.

As Aer Lingus will testify, having Ryanair as your nearest and biggest competitor focuses the mind. Aegean will need to prove that its recent good run can be extended.

In 3Q2014, Aegean Airlines Group's net profit of EUR63 million was 18% higher than the proforma prior year figure (including Olympic Air as if it had been part of the group throughout the period and not just from its acquisition at the end of Oct-2013). Revenues were up 11% on a proforma basis and the operating profit of EUR86 million was up 26% on the same basis. The operating margin improved by 2.8 ppts from the prior year period to 24.8%.

One of Europe's most profitable airlines

Aegean Airlines Group's 9M2014 operating margin places it second behind Ryanair among European airlines reporting results for the first nine months of calendar 2014. Based on the rolling 12m to Sep-2014, Aegean's margin of 12.1% is just nudged down to third place by easyJet's 12.8% (9M results are not available for easyJet) and Ryanair's 16.5%.

Strong liquidity even after cash return to shareholders 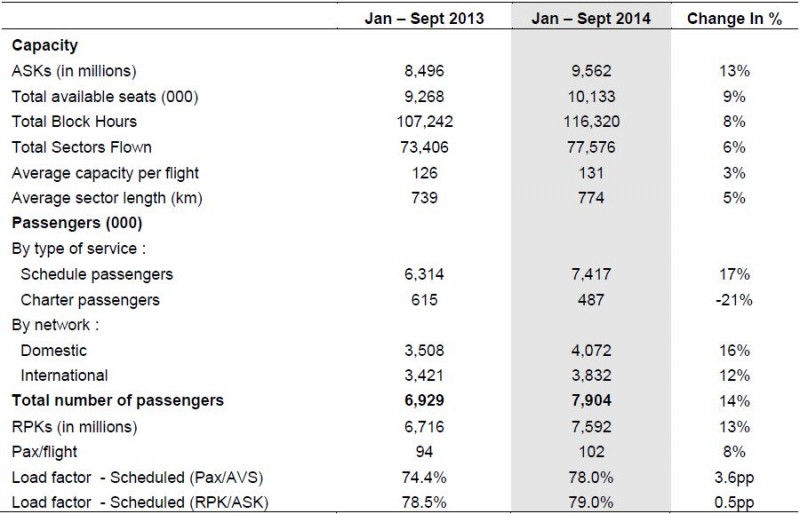 According to our calculations, total revenue per ASK (RASK) fell by 2.5% year on year in 3Q, very close to the 2.4% reduction for 9M.

Operating costs up 7%, less than revenues

Reductions in cost per ASK (CASK) have been fairly consistent through the year, falling by 6.1% in 3Q and in 9M, more than offsetting the drop in RASK. 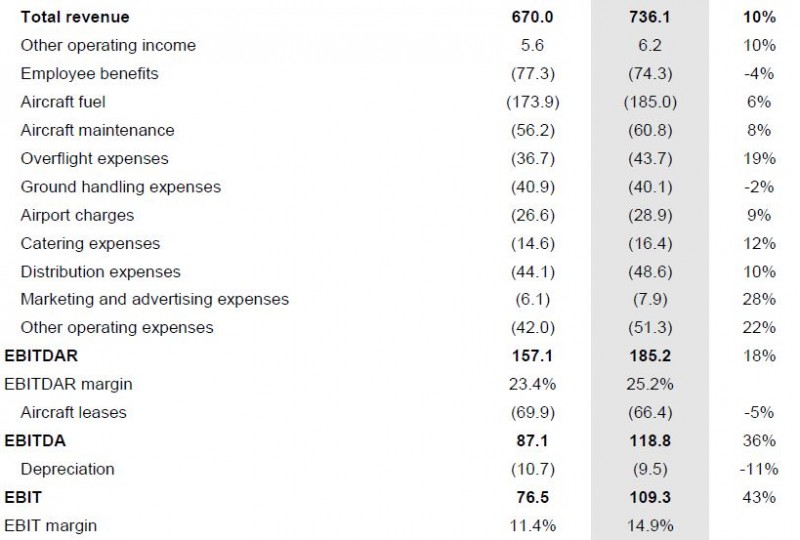 Much reduced Olympic appears now to be profitable

As we have previously highlighted, Aegean manages the two brands in the Group as an integrated network. Nevertheless, analysis of the disaggregated results of the parent company Aegean and its subsidiary Olympic suggests that the acquisition synergies are having a positive impact.

The reported accounts of the parent Aegean Airlines show that its net profit grew by 10% to EUR65 million in 9M2014 and its operating profit increased by 26% to EUR93 million, showing a further improvement after a year on year deterioration in 1Q2014, which was reversed in 2Q.

By subtracting the Aegean Airlines stand alone results from the consolidated Group results, we can calculate that Olympic Air's profitability improved very substantially in 9M2014 (see table below) as its capacity, revenues and costs were sharply reduced. Olympic now only operates domestic PSO routes.

Further growth is planned in 2015

Aegean's Managing Director Dimitris Gerogiannis said, "We will continue to invest in growing our fleet and capacity for 2015, adding destinations and penetrating new source markets for Greek tourism. Our key priorities involve continuous investments in growing our network, achieving scale economies as well as focusing on new service offerings to our passengers within a fast changing competitive environment that does offer however significant opportunities to grow further.”

Ryanair is gaining ground in Greece…

A key strategic battle for 2015 will be Ryanair's growing presence in Greece. In the domestic market, Ryanair's share of seats is 18% for the week of 24-Nov-2014, up from 2% a year earlier, according to OAG data. Over the same period, the Aegean Group's share of seats has fallen to 76% from 94%, in spite of Aegean's 13% capacity increase. Ryanair's entry has stimulated an increase in the total domestic market by more than one third over the past year.

On routes from Greece to Western Europe, Aegean's share of seats is now 35%, down from 39% a year ago, while Ryanair's is up to 19% from 7% a year ago (source: OAG, week of 24-Nov-2014 versus same week of 2013). Aegean still has a stronger position overall in the Greek market, but Ryanair's superior pan-European presence and its CASK advantage of more than 40% against Aegean make it a formidable competitor.

…and the battle looks set to move to Cyprus too

The two airlines are also competitors in the bidding for Cyprus Airways, although the privatisation process appears to have stalled after Cyprus’ Minister of Finance Harris Georgiades said the government has rejected proposals from Ryanair and Aegean (Cyprus Mail/ch-aviation.com/ttgdigital, 16-Nov-2041). Mr Georgiades said that Cyprus Airways is not attracting serious interest from potential strategic investors (Cyprus Mail/InCyprus, 13-Nov-2014).

Whether or not either of Aegean or Ryanair is successful in acquiring Cyprus Airways, both are known to be keen to expand in this market and so their battle will not only be in the Greek market.

In the meantime, Aegean is to be applauded for its achievements this year in integrating the Olympic acquisition and in driving down unit costs more than enough to offset downward competitive price pressures. Competition with Ryanair will continue to test its skills.