Airports Council International (ACI) has delivered an optimistic assessment of the outlook for traffic at the world's airports for the remainder of 2011, as it released figures for April and the first four months of the year.

The association's World Director Economics Andreas Schimm said: “This increase is a very positive result, particularly in light of the current situation in Japan as well as in North Africa, and an erratic economic recovery. Year-to-date average global growth at 5.9% certainly provides a solid basis as well as an upbeat outlook for the rest of the year.”

While international traffic dropped by 5% in April 2010, it jumped by almost 18% in April 2011, bringing year-to-date growth of 8%. Easter holiday travel was a second factor contributing to that strong traffic increase, with holiday movements falling in the middle of April 2011, whereas in 2010 Easter travel was split between March and April.

Schimm added: “This month’s spike represents more than just compensation for last year’s losses. When we compare back to April 2009, we still see that international traffic volumes rose by a strong 12%, an indicator of growth over and beyond the compensation for disruptive factors.”

European airports spearheaded monthly growth at an extraordinary 27%. Growth of more than 20% was reported by 61 out of 78 airports in the sample led by Helsinki (+58%). In North America, and despite 7.6 percent increase in international traffic, growth remains marginal (+2.1%), muted by almost stagnating domestic traffic. Latin America/Caribbean (+15.2%) traffic soared with both domestic and international traffic growing double digits. The Middle East reported its first double-digit monthly growth rate since November 2010, also in part due to the compensatory indirect ash cloud effect at airports such as Dubai (+13%) and Abu Dhabi (+15%).

Airport stocks were mixed on Friday, led lower by Vienna Airport (-2.%) and higher by Shanghai Airport (+1.9%). 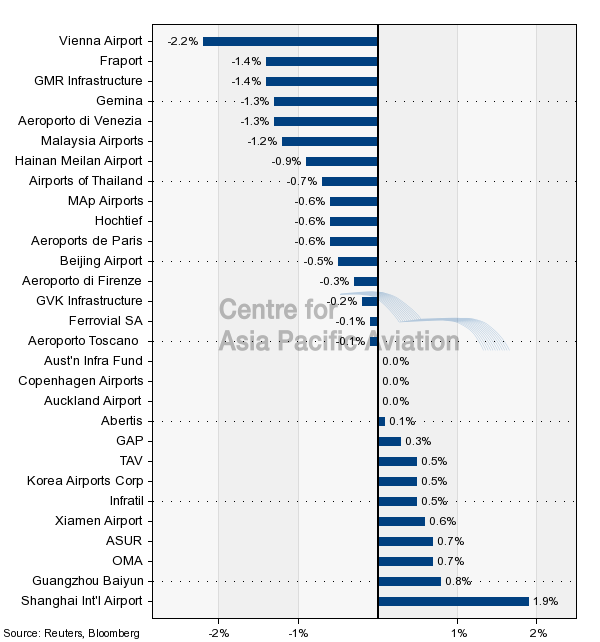