As the A380’s sales become more difficult, new purchases are becoming more complex. Rather than the ordering of aircraft for a clear commercial recipe, or adding the usual ingredient of politics, A380 sales are becoming a fusion.

Airbus sold A380s to All Nippon Airways, but only in exchange for backing ANA’s partnership of the bankrupt A380 customer Skymark. A failed bid to sell the A350 to Emirates hinged on commitment to keep the A380 line open.

Now, according to press reports, Airbus plans to sell the A380 to China in exchange for giving China greater industrial participation on the A380. China already has an A320 final assembly line and A330 (and soon 737) completion centres, so it is unclear what further insights China gains, unless A380 involvement is on the way to China becoming another Japan (which builds an astounding one fifth of a 777), or US/France (building widebodies).

It is this political factor that is key: on their own, Chinese airlines would not order A380s. It is a complex scenario, all the more complicated by Airbus’ management changes.

China Southern is the only Chinese A380 operator

Foreign airlines fly the A380 to China (when local regulators permit) but the type’s local footprint is confined to a mere five A380s operated by China Southern. China Southern’s A380s average 6.2 years old – about average for its global fleet type. China Southern has almost consistently struggled to find routes suitable for the type, in terms of both load factor and yield.

China Southern Airlines average fleet age for aircraft in service: as at 08-Jan-2018 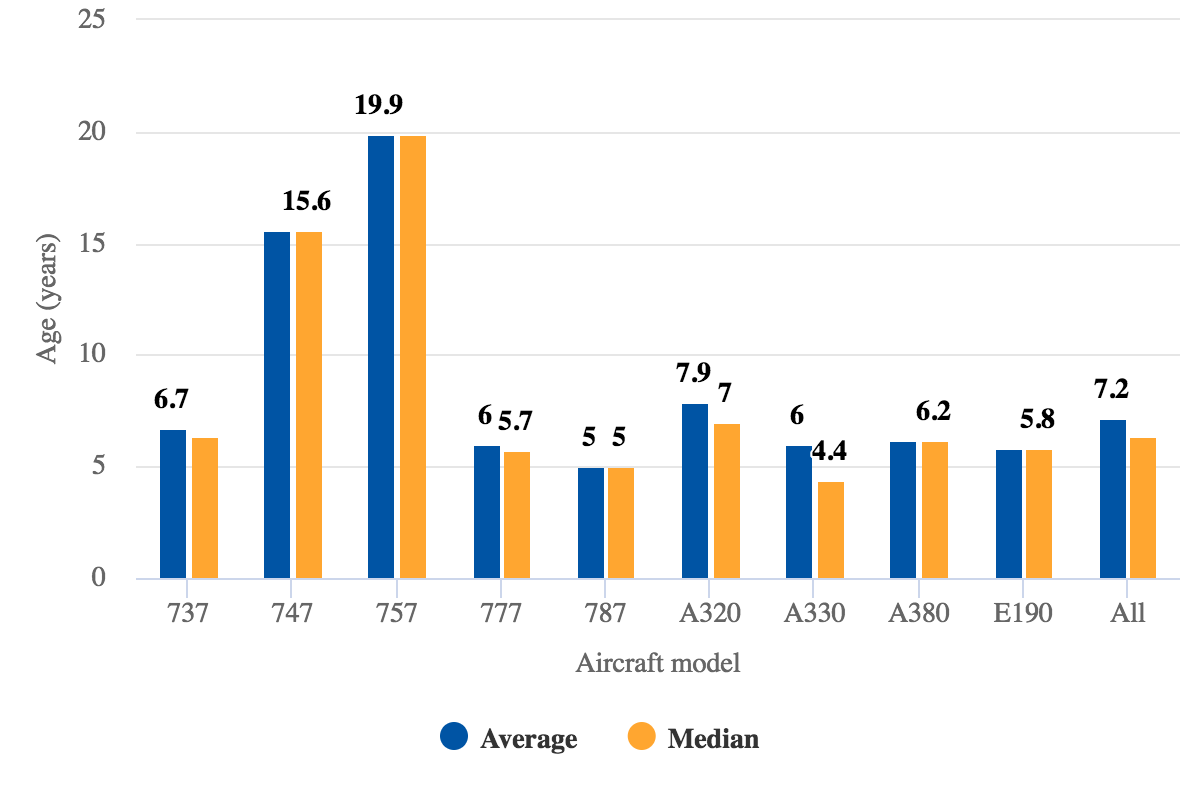 China Southern’s fleet of five A380s is borderline subscale; all other commercial operators plan a fleet of at least six – with the exception of All Nippon Airways, which is taking only three A380s (to be used exclusively to Hawaii) as part of a complex arrangement by which Airbus backed ANA’s partnership with its bankrupt local competitor Skymark Airlines.

The only other Very Large Aircraft in China is the 747-8, with Air China

The A380 and 747-8 are part of the category of aircraft known as Very Large Aircraft (VLAs). The only other passenger VLAs in China are Air China’s 747-8s. Air China has seven, although this includes aircraft used for government VVIP purposes (“Xi Force One”). Indeed, if it was not for the government’s need for the 747-8 as a government transporter, Air China would probably not have ordered the 747-8.

Air China was a 747-400 passenger operator (China Eastern and China Southern were not) but its long haul backbone is the 777-300ER, and Air China has 26 of the type. 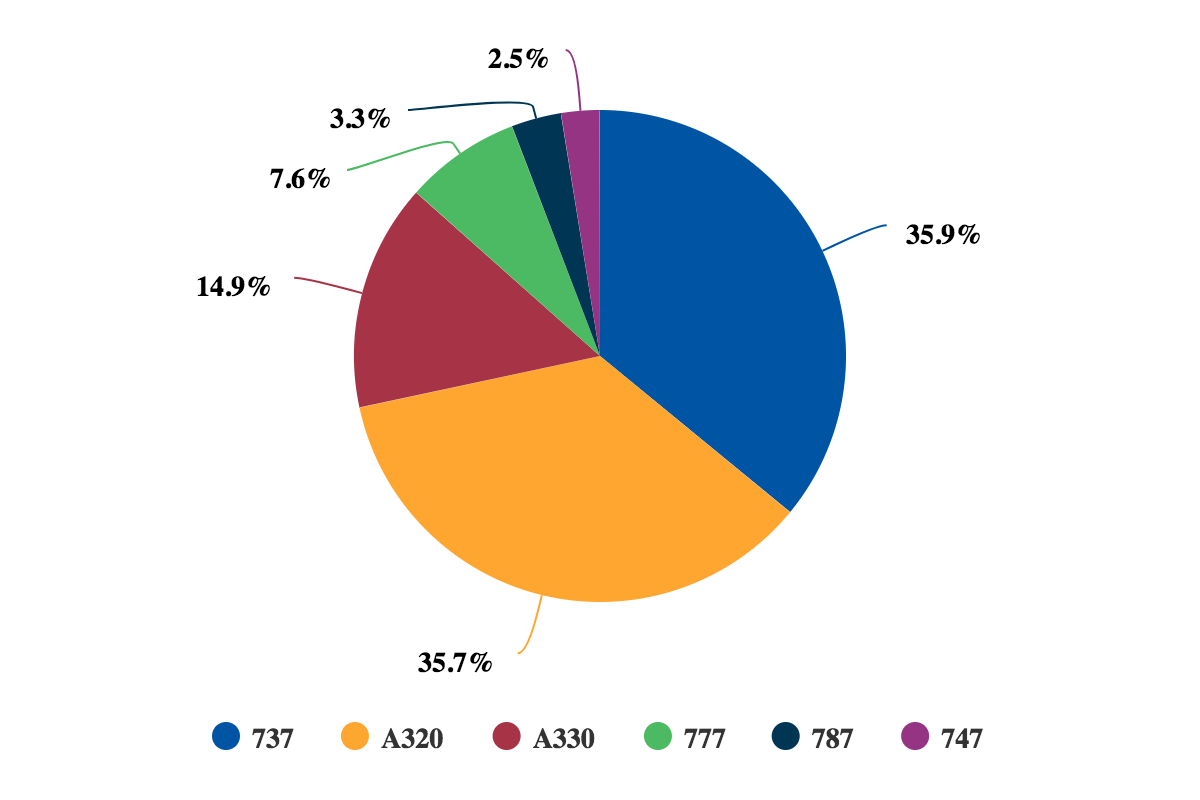 The easy narrative about the A380 and China is that with all the market’s growth and existing congestion, the A380 – with its very large capacity – is the perfect solution. Congestion is a serious infrastructure problem, it is true; but any Chinese A380 order would be incremental in what is a very large market, and would not free up a notable number of slots.

So from an airline perspective, the A380 is not the silver bullet to solve the infrastructure problem.

Globally, airlines have found it challenging to fill an A380 flight with enough passengers at a suitable yield. There are plenty of statistics telling of the volume of origin and destination passengers on high yield routes.

Yet what the numbers do not tell is how many of those passengers want to travel at a set time on a low frequency schedule. For example, British Airways does not fly its A380 on London Heathrow-New York JFK, which is considered the world’s most premium market. Here the winner is frequency, on its own and with JV partner American Airlines. (The value of frequency in value markets is cited by Cathay Pacific as one reason not to operate the A380.)

Chinese airlines have been working hard to attain decent yields on international services. Their improvements have been challenged by rapid growth that has pressured yields. It is true that there is much Chinese airlines can improve within their control – product, service, distribution and e-commerce – but fundamentally, the Chinese market is characterised by high volume and low yield.

Aircraft of course are long term investments. There will be a future when the size of the Chinese market, and growing sophistication, creates a large premium market. But by then the A380, or even an A380neo, will be old; the A380 design is already nearing 20 years of age. Innovations in fleet result in new narrowbodies delivering seat unit costs comparable to those of widebodies.

It is true that Chinese authorities have been looking to solve the infrastructure challenge by encouraging airlines to use widebodies on domestic trunk routes. In some instances, “encourage” is an offer that cannot be refused: there are cases where domestic routes have been allocated only to airlines planning to operate with widebodies.

The A330 rules domestic widebody flying; many A330s are in configurations dedicated for domestic use. Other widebodies are used, but in between international sectors, or for positioning purposes. 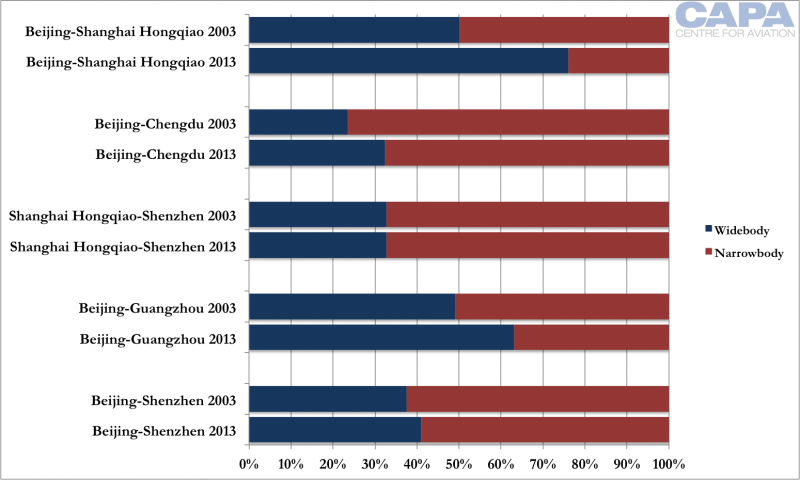 Questions about the future of domestic flying in China are not centred on the A380, which few expect to be dedicated for domestic services. Already, the 787 and A350 are deemed too heavy for regular domestic service. The question then is about the sales prospects for the A330neo, or Boeing’s possible new aircraft (797).

Theoretically, using the A380 or other widebody aircraft on high-frequency domestic routes would help either consolidate existing slots or slow the consumption of new slots. But using the A380 on its intended long haul international missions would have a limited contribution to solving slot challenges.

There may be an argument that the A380 carries further risk to congestion problems: if a service is delayed, there are many passengers impacted.

Globally, many airlines that do not operate the A380 undoubtedly have routes where the A380 would be profitable. The problem is finding enough of those services collectively, and those that on the individual level have satisfactory profitability throughout the year and per individual frequency. The evidence indicates most airlines cannot make an A380 fleet, even a small one, work. It is perhaps not all about the aircraft or network; in some instances the deciding factor may be management's risk aversion.

Chinese airlines are probably no different. If it were left to them, they would probably not order A380s.

But such decisions are not always up to them; aircraft orders are highly political. Any A380 development in China would probably come from a government owned airline that is effectively forced to acquire the A380. (There is a quid pro quo for the commitment.)

There is upside for Boeing: the big three state owned airlines typically have to give similar value to each manufacturer, so an A380 order means Boeing could expect an order, too – and perhaps Boeing would secure an order for an aircraft with a higher profit margin than what Airbus would make by building the A380.

Outlook: China is gaining experience and insights with aircraft production; the A380 would need to add new elements

The underlying question appears to be what China expects to gain from doing local A380 production work. China already has a final assembly line for the A320 series aircraft, a completion centre for the A330 and soon, facilities for Boeing’s 737. All of these aircraft are in a category with a far brighter future than a very large aircraft. Then again, perhaps the A380’s limited future could result in Airbus being willing to give away know-how.

Whatever value local A380 work has, is that enough to require airlines to buy the type?

What is certain is that China wants a good deal, at whatever level this is assessed on. China is not a secondary market in which to peddle unwanted products. Already the directions of reuse may be surprising: A320 family aircraft formerly with China Southern now fly for United Airlines – and not the other way around.

The A380 and potential industrial participation in China are small plays compared to the big question of what may be the Boeing 797: Boeing’s first all-new aircraft in nearly 20 years, an aircraft that will mean industrial participation in many countries, but with newcomer China vying for a sizeable share such as long-established Japan already has. Japan accounts for approximately one fifth of a classic 777, and will continue to hold this percentage on the 777X (which, as a larger aircraft, translates to more absolute work).

As for China, the market of the future increasingly wants the latest and most efficient products. But as airlines are a small blip in the value chain, the question is what other value is generated by a larger A380 fleet in China.