Cebu Pacific is looking to accelerate its international expansion and open up new medium-haul routes to Australia, India and Japan following its order this week for 37 additional Airbus A320 aircraft. The order also cements Cebu Pacific’s position as the largest low-cost carrier (LCC) in the Philippines as competition in the market intensifies significantly.

Cebu Pacific on 16-Jun-2011 announced it had exercised existing options for seven additional A320s and placed new orders for 30 A321neos. The 37 additional aircraft ensures that Cebu Pacific will continue expanding at its current rapid clip. Deliveries of the new aircraft are slated for 2015 to 2021, ensuring growth at an average clip of five aircraft per year after 2014, when the last of the 18 additional A320s Cebu Pacific already has on order are delivered. The new order is also strategically important because the A321neos will have significantly more range and more seats than any of Cebu’s current aircraft.

A321neo opens up possibility of narrowbody routes from Manila to Australia, India and northern Japan

Cebu Pacific CEO Lance Gokongwei called the A321neo “a real game-changer for Cebu Pacific” because it will enable the carrier “to serve cities in Australia, India and northern Japan, places the A320 cannot reach”. With 15% lower fuel burn than the current generation A321, the A321neo also has improved operating economics.

Cebu Pacific is already the largest domestic carrier in the Philippines, capturing a 48% share of the market in 2010. The carrier continues to add capacity domestically, including a planned 33% increase in capacity in 4Q2011 which will result in more frequencies on trunk routes such as Manila-Cebu and Manila-Davao. But Cebu Pacific has been focusing much of its recent expansion in the international market.

The carrier, which just launched its 24th international route, recorded a 32% increase in international traffic in 1Q2011 to 700,000 passengers. About 25% of the Cebu’s passengers are now international, compared to only 18% two years ago. Cebu Pacific currently accounts for just over one-third of all international capacity provided by Philippine carriers, up from just over one-quarter a year ago. 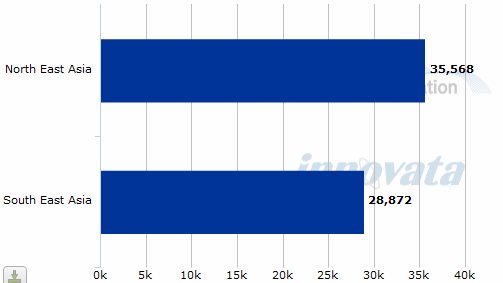 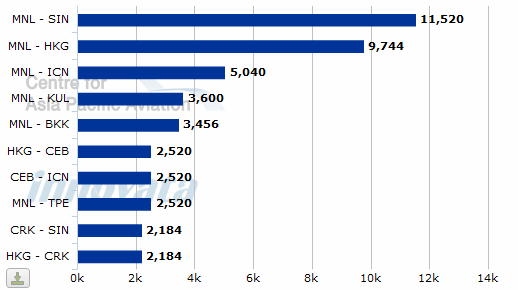 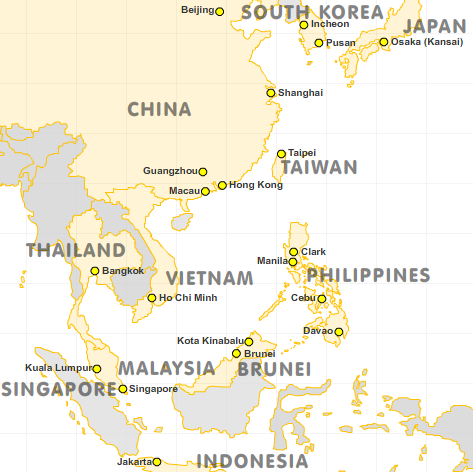 With the A321neo, Cebu will be able to open more international routes as well as lower its unit costs on some of its busier existing international routes such as Manila to Hong Kong, Singapore and Seoul. In the Manila-Hong Kong market, which is the largest international route from Manila with about 30,000 seats per week, Cebu Pacific currently only has a 16% share. The A321neo will allow Cebu Pacific to increase capacity and share of this key market without having to secure additional slots at Hong Kong. The A321neo will also likely give Cebu Pacific lower unit costs than its four competitors in this market – Cathay Pacific, Philippine Airlines (PAL), Hong Kong Express and Dragonair – and any potential future competitors on the route such as Tiger Airways or AirAsia.

Manila-Singapore could be an even more attractive route for the A321neo given the intense low-cost competition already in this market. Cebu Pacific now competes against five carriers between Manila and Singapore, including three other low-cost carriers (AirPhil Express, Jetstar Asia and Tiger). Cebu Pacific currently has a 22% share of the 25,000 weekly seats in the Manila-Singapore market, making it the second largest carrier on the route after Singapore Airlines.

Zest Air currently has a 16% share of the Manila-Cebu market while AirPhil Express has 15%. There is clearly enough demand to fill 220-seat A321neos in this market. In fact PAL now operates widebody aircraft on several of its Manila-Cebu frequencies.

The prospect of further reducing its already low unit costs on domestic trunks routes such as Manila-Cebu is especially appealing as low-cost competition in the Philippines is intensifying rapidly. Philippine regional carrier SEAir and Singapore-based Tiger launched a new low-fare operation on international routes from Manila in Dec-2010 and plan to begin competing on domestic trunk routes including Manila-Cebu later this year. AirAsia is also planning to launch its new Philippine affiliate in 4Q2011 while Jetstar has been looking at entering the market with its own local joint venture. As a result the Philippine market could become the biggest low-cost battleground in Asia with as many as six local low-cost carriers (Cebu Pacific, AirPhil Express, Zest Air, SEAir/Tiger, Philippine AirAsia and potentially a new Jetstar affiliate).

The A321neo could become a key differentiator for Cebu Pacific as it would give it a significant cost advantage over its LCC competitors. All the other Philippine LCCs also operate A320 family aircraft but only have smaller variants and the existing generation of engines. Cebu Pacific is the first LCC in Asia to order any member of the new A320neo family. AirAsia is expected to follow with its own A320neo order at next week’s Paris Air Show but it will likely be several years before the new Philippine affiliate gets the new variant.

Mr Gokongwei explains that the A321neo will “reduce our unit cost per seat to a level that cannot be achieved flying A320s. This means that Cebu Pacific will be able to offer even lower fares to our guests and be much more competitive with anyone flying less cost efficient aircraft.”

Cebu’s A321neos could also pose yet another new challenge for PAL, which has been responding to increasing low-cost competition by reducing domestic capacity and expanding its international operation. Cebu Pacific is already competing against PAL in some key international markets such as Hong Kong and Singapore but the A321neo will allow Cebu Pacific to take on PAL in even more markets.  PAL, for example, currently does not face any low-cost competition to Tokyo, India or Australia.

PAL is currently the only carrier operating in the Philippines-India market. This market is currently very small, with PAL only offering 894 weekly seats to India, although there is big potential for growth.

In the Manila-Tokyo market PAL now competes against Japan Airlines, All Nippon Airways and Delta Air Lines. Cebu Pacific currently only serves Osaka and accounts for just 3% of total capacity in the overall Philippines-Japan market. There is a lot of room for Cebu Pacific to potentially grow in this key market after it begins taking delivery of the A321neo. 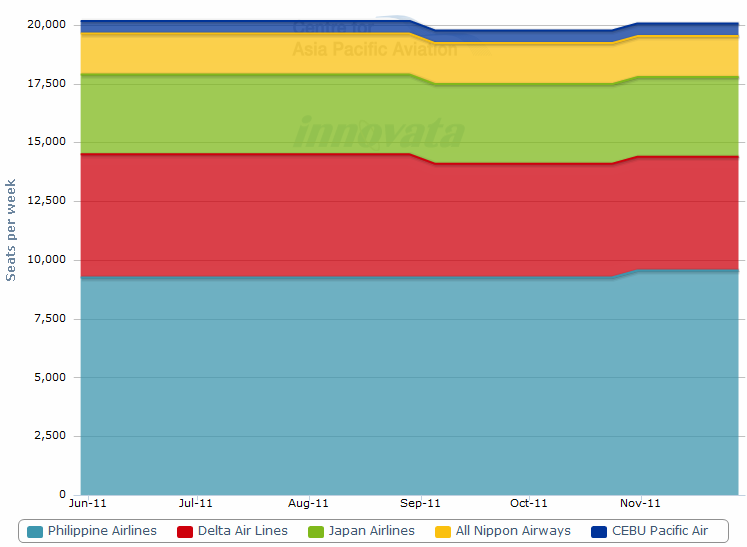 Over the next few years some of Cebu Pacific’s competitors are expecting to grow just as fast. AirPhil Express and Zest both currently only operate six A320s (along with turboprops) but are committed to growing their A320 fleets to 20 aircraft over the next three to four years. Philippine AirAsia also expects to have a fleet of 20 A320s within its first five years.

But by committing to a new batch of deliveries that run all the way through 2021 and signing up for the next-generation A321neo, Cebu Pacific clearly ups the ante. This order could put pressure on some of Cebu’s competitors to buy even more aircraft but capital could be a challenge. Cebu Pacific has an advantage from a capital perspective in that it completed an IPO in Oct-2010, raising new capital to help fund fleet expansion. All of Cebu’s low-cost competitors in the Philippines remain privately owned and their IPO prospects seem bleak given the intense competition in the market.

Cebu Pacific also had a big head start as it was the first carrier to take advantage of deregulation in the Philippines and compete against PAL. Cebu Pacific launched services in 1996 and in many respects was Asia’s first low-cost carrier. While Cebu Pacific was a relatively minor player through first decade of its history, its traffic has steadily increased since 2005, when it carried only 2.2 million passengers. 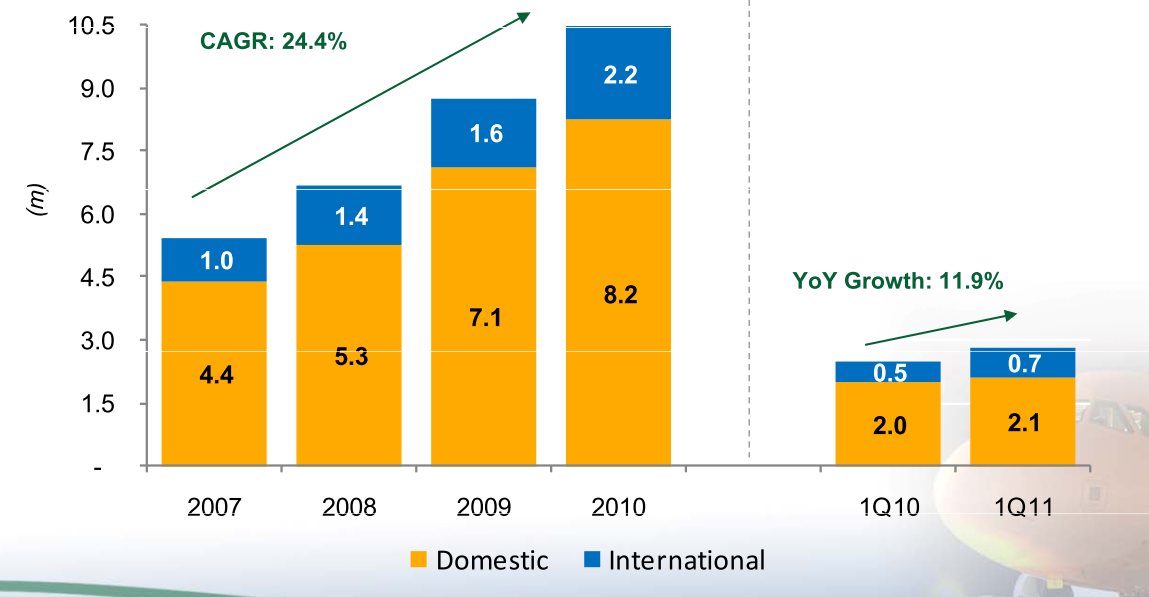