Emirates denies reports it is considering IPO,1time rallies; Lonrho and Air Arabia down;

1time Holdings (+9.0%) shares surged on Thursday (25-Feb-2010), shrugging off another slip in the South African All-Share Index (-0.8%). The South African Rand (ZAR) fell to its lowest level since Nov-2009, as investors sold high risk stocks on weak US data released during trading, including an increase in jobless claims. Lonrho (-2.1%) fell with the decline, while Comair was flat. Also in Africa, Kenya Airways was also flat.

Emirates Chairman, Sheik Ahmed bin Saeed Al Maktoum, told Zawya Dow Jones this week that it has no current plans to launch an initial public offering (IPO) and denied rumours that the carrier or its subsidiaries were part of negotiations with Abu Dhabi, when the Abu Dhabi Government offered USD15 billion in financial assistance to Dubai, as Dubai Government-owned, Dubai World, requested an extension on USD26 billion in debt.

However, Sheikh Ahmed stated that the carrier may consider launching an offering one day, adding that if an IPO was held he is :sure it would be good, especially if placed in UAE stocks markets:. 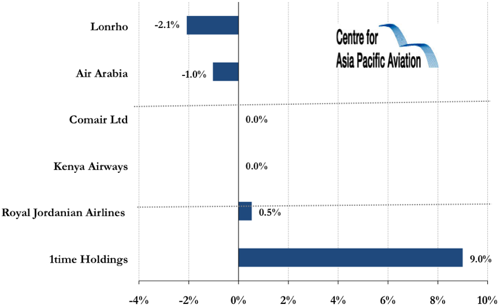