After being quiet for so long, Japan is moving quickly. Seat capacity between Australia and Japan has increased by 35.6% to be the largest international growth market for Australia so far in 2016. The increase can be attributed to Qantas’ expansion of its Japanese operations with the addition of Brisbane-Tokyo Narita, while ANA returned to Sydney from Haneda in late 2015. 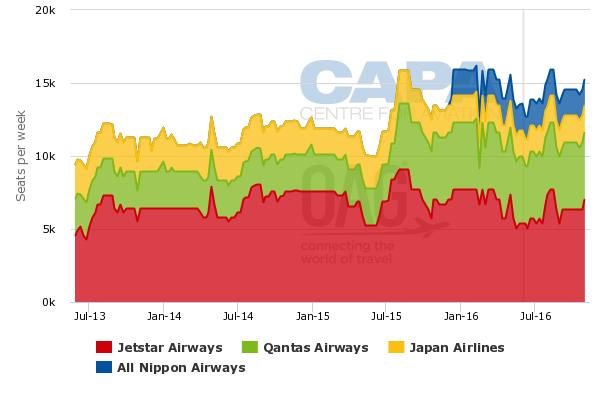 Qantas’ mainline operation has 33.8% of total seat capacity, including Jetstar in this figure increases to 76.1%. JAL holds 13.4% while ANA operates a marginally smaller 13.2%. Around 40% of Japanese visitors travel on Jetstar, followed by Qantas at 22% and Japan Airlines with 12%. Increases in monthly inbound arrivals from Japan have consistently held in the double-digit range since the capacity additions, while Japan remains among the top 10 outbound markets for Australians travelling overseas.

The increases are perhaps unexpected – eclipsing even China which grew at 28.0%, and Indonesia at 20.7%. The market share distribution remains heavily weighted in favour of the Qantas Group, not unlike the Japanese tourism boom of the 1990s. Demand remains strong, though no indicator of yield – all carriers reported load factors in excess of 90%; Jetstar at 93.5%, Japan Airlines at 96.6%, ANA at 96.7% and Qantas at 97.3%. Let the good times roll.