The Swiss airport reports traffic in 1H2010 increased by approximately 3% year-on-year, despite the affect of a 15% traffic dive during Apr-2010 due to the effects of the volcanic eruption in Iceland. Shares in Zurich were up 3.3% yesterday, in leading other airports such as Venice (+1.3%), Copenhagen (+0.6%) and Vienna (-0.5%).

Scheduled traffic rose 4.5% with average load factors at the airport up 2.1% this year. The strongest increase in traffic has been from North American destinations, up 9.6% for the year to the end of Jun-2010. Asia Pacific traffic has also grown strongly, up 4.9%. Traffic to/from European destinations remains weak, up 2.1% in 1H2010 and just 0.9% in Jun-2010. Given that European traffic accounts for over 75% of all passengers at the airport, this weakness is a point of concern for the airport.

The airport is heavily involved in the Zurich 2010 project, restructuring the airport to implement the Schengen Agreement by providing the required passenger infrastructure. This will centralise security checks will enhance the quality and user-friendliness of the airport. Demolition work at Dock B started in Jul-2009, with the dock to be split into two handling levels for Schengen and non-Schengen passengers. The building work is scheduled for completion at the end of 2011. 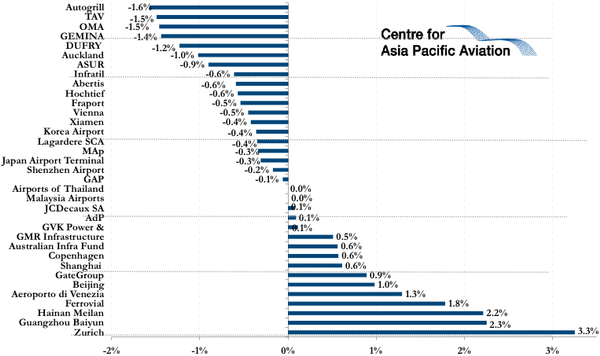