Women airline pilots: a tiny percentage, and only growing slowly

It is 109 years since Baroness Raymonde de Laroche became the first woman to fly solo in 1909. In spite of the significant contribution to aviation made by a large number of women over more than a century (the Pioneer Hall of Fame pages on the website of Women in Aviation contains many), aviation still has a long way to go in pilot gender equality. CAPA has been active in reviewing the issue of women in airline management over the years, but the trends leave few grounds for encouragement.

Data for the US and the UK indicate that just over 4% of airline pilots are women. This share is growing, but very slowly. According to the International Society of Women Airline Pilots, the US big three airlines have the highest number of women pilots and the Indian LCC IndiGo has the highest proportion (13.9%). However, consistent global data on women airline pilots do not exist.

The background papers for an Aug-2018 ICAO conference, 'Global Aviation Gender Summit', used a figure of 5.18% as a global ratio.

This is a much needed event, but if a global aviation organisation at a conference dedicated to improving the industry's gender balance cannot precisely calibrate the challenge, then the challenge must be great.

7.0% of all US pilot certificates are held by women

As is often the case, one country that does have publicly available data on the number of women pilots is the United States.

According to the Federal Aviation Administration, across all pilot categories there was a total of 42,694 active pilot certificates held by women in the US at 31-Dec-2017. This is 7.0% of all pilots (note that this includes students, which account for more than 19,000 women, in addition to private pilots, airline pilots and commercial pilots not employed by airlines).

4.4% of US airline pilots are women

Focusing on the airline sector, there were 6,994 women holding FAA certificates as airline pilots, representing just 4.4% of the total.

For both sets of data, the number of female pilots is growing in the US. Over the past decade (2007 to 2017), the total number of women pilots across all categories in the US has grown by 19% (versus just 3% for all pilots).

*At 31-Dec for each year.
Source: CAPA - Centre for Aviation, Federal Aviation Administration.

Women pilots' share of all pilot jobs is growing, but by less than 1ppt over the past 10 years (see chart below).

The number of women holding FAA student pilot certificates has doubled over the past decade, indicating a growing interest among women in qualifying as cockpit crew (but they were still only 12.9% of all FAA student pilots at 31-Dec-2017).

*At 31-Dec for each year.
Source: CAPA - Centre for Aviation, Federal Aviation Administration.

4.3% of UK airline pilots are women

The UK Civil Aviation Authority also publishes the number of pilot licences by gender. At 31-Dec-2016 (the most recent date for which data are available), 4.3% of UK airline pilots were female, similar to the proportion in the US.

5.2% of pilots among airlines surveyed by ISWAP are women

The publication by individual airlines of pilot numbers by gender is inconsistent. A useful source is the International Society of Women Airline Pilots, which gathers and publishes some data on the number of female pilots by airline across different countries, although this is not comprehensive.

The 5.2% ratio for women pilots among the airlines reporting to ISWAP is higher than the ratios for the US and the UK, but probably reflects some self-selection bias. Airlines making their data available to the ISWAP may be more likely to have a higher ratio of women pilots.

In absolute terms, the US big three airlines have the highest number of women pilots.

United Airlines tops the list with 940, followed by Delta Air Lines, with 692, and American, with 626. Lufthansa, the leading non-US employer of women pilots, has 375, followed by IndiGo, which has 322.

The 20 airlines with more than 100 female pilots are shown in the chart below. In addition to the five named above, they also include SkyWest, Southwest, British Airways, Air Canada, FedEx Express, jetBlue, easyjet, UPS, Air India, Alaska, KLM, ExpressJet, Cathay Pacific, Endeavor Air and Republic Airlines. 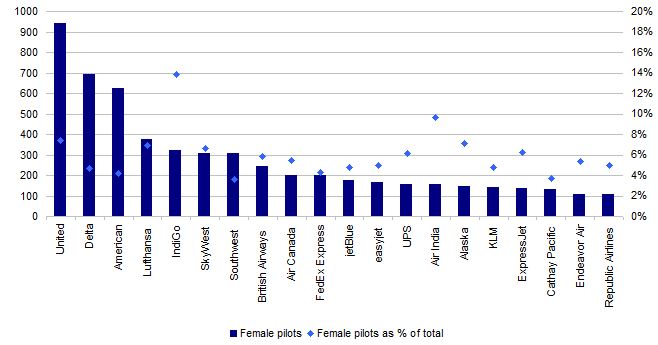 The fast growing Indian LCC IndiGo heads the ISWAP list when it is ranked by female pilots as a percentage of the total, with 13.9%. The figure of 322 women pilots employed by it today compares with 69 five years ago.

It is fractionally ahead of two Qantas subsidiaries: Network Aviation, also on 13.9%, and QantasLink, on 13.8%.

There are 38 airlines in the ISWAP list where women make up more than 5% of the pilot body. These are shown in the chart below.

Airlines where women account for more than 5% of pilots: Jul-2018 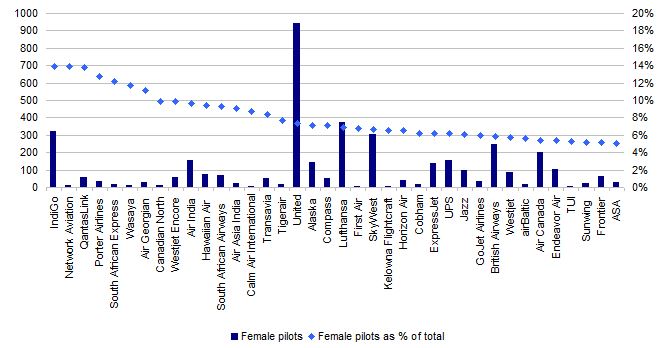 There are other airlines not included in the ISWAP ranking that have published female pilot data. For example, the Air France website says that 8% of its pilots are women, and data in Iberia's 2017 annual report show a ratio of 5.5%.

Airlines should be required to publish pilot numbers by gender

ICAO's Global Aviation Gender Summit, co-organised by the South African Civil Aviation Authority and held in Cape Town 8 to 10-Aug-2018, is the first ever conference of its kind. The role of women as airline pilots is just one part of the gender agenda in aviation.

Growing the number of women airline pilots would set an example. Pilots are the highest paid and probably most headline-grabbing cohort among aviation workers.

On a purely hard-nosed, commercial level, the current squeeze in the supply of qualified airline pilots means that airlines need to widen the recruitment net. Progress towards gender equality in the pilot cadre would help to accelerate gender equality across the aviation sector.

Then there is the issue of women in airline management

The issue of women in senior airline management is even more dire. CAPA has held several sessions at its events on the topic and undertaken considerable research in the area. One early CAPA report was in 2010 - "Why don't women run airlines?" ; that report began as follows:

"THE AIRLINE INDUSTRY IS NOTORIOUS for its “boysy” silhouette. It is a business which revolves around big boys’ toys, engineering and industry regulation. The only areas where women have a large role is at check-in and serving in-flight meals. At least that is the perception, and one which was pretty much accurate until well into the 1990s.

"Whether it is in fact all that different from other sectors in its gender mix is another issue. But this industry is a different place from where it was just 10 years ago. The big boys’ toys have given way to a customer facing, consumer-driven business where humanity skills are gaining ascendancy over engineering.

"Amid massive attitudinal and structural change in a turbulent decade, the industry’s accelerated evolution has done much to open doors for women. The result should presumably be that women play a much greater role in the newer, usually low cost, airlines. Legacy airlines meanwhile are apparently little changed over recent decades. These generalisations are broadly correct.

"But, when we reviewed the profiles of over 200 airlines around the world, the contrast in leadership diversity was not as marked as might be expected, at least at the highest management levels."

When we first conducted our research, in 2009/2010, we discovered only 15 women CEOs or MDs among all of the world's airlines.

A follow up report, five years later in 2015 found that, rather than things improving, they were actually deteriorating! Most of the women who'd been running airlines five years earlier had moved on, mostly replaced by men: Why don’t women run airlines? Part 1: 94% of airlines are led by men

Around the world, perhaps as no coincidence, it is the newer airlines - mostly LCCs - who have women in key roles.

More recently, at CAPA's LCCs in North Asia Summit, held in Seoul in Jun-2018: Shattering The Ceiling – The Rise Of Women In Asian Aviation the topic was discussed in the Asian context.

This was preceded by an update of women airline leaders in CAPA's sister publication, Blue Swan Daily, CAPA’s Women in aviation: In Asia Pacific, LCCs represent more women CEOs, along with similar commentaries on other world regions.

Sadly it does look as if there have been few signs of improvement. Clearly there is no silver bullet. But at least creating greater awareness and constantly challenging the status quo must eventually have some impact....