What’s going on in the world economy? And where is aviation heading?

As the bond rate inversion curve appeared on 14-Aug-2019 in the US and the UK, Wall Street headed rapidly south. A number of other countries have already this experienced inversion for a while. And in Germany, the world’s fourth largest economy, GDP growth rate went into reverse in 2Q2019.

Does this mean recession is coming, or even imminent?

Air freight numbers have been steadily falling for nearly a year. They used to be good forward indicators of where the world economy is headed, but not so much in recent years. Passenger traffic growth too has slowed markedly in the past year.

Global trade conflict is creating uncertainty and aviation is inevitably caught up in that.

So are we heading for trouble, and if so, when?

Air Freight is not only an economic indicator, but a large revenue earner

Especially for airlines in Asia Pacific, freight contributes considerably to overall revenues. And, since late-2018, the freight downturn has hit almost all regions, as this IATA chart shows. 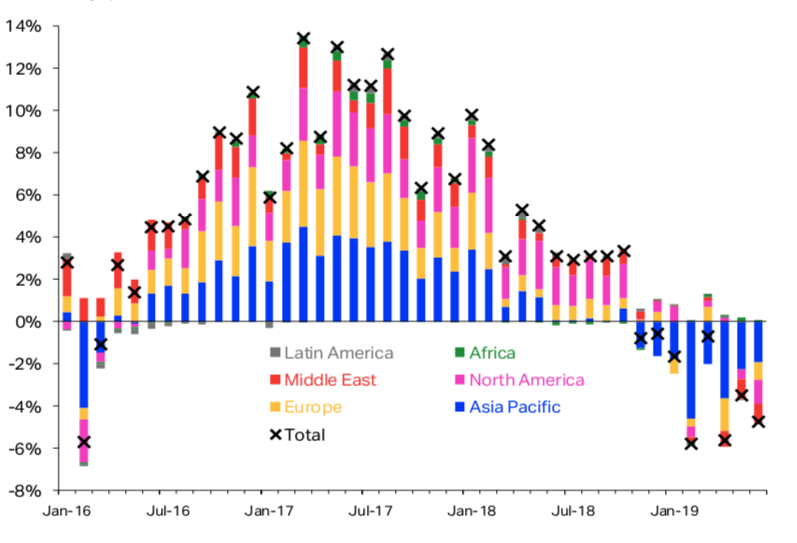 The aggregated figure shows this emerging trend clearly, as the seasonally adjusted line tracked down since late 2018. 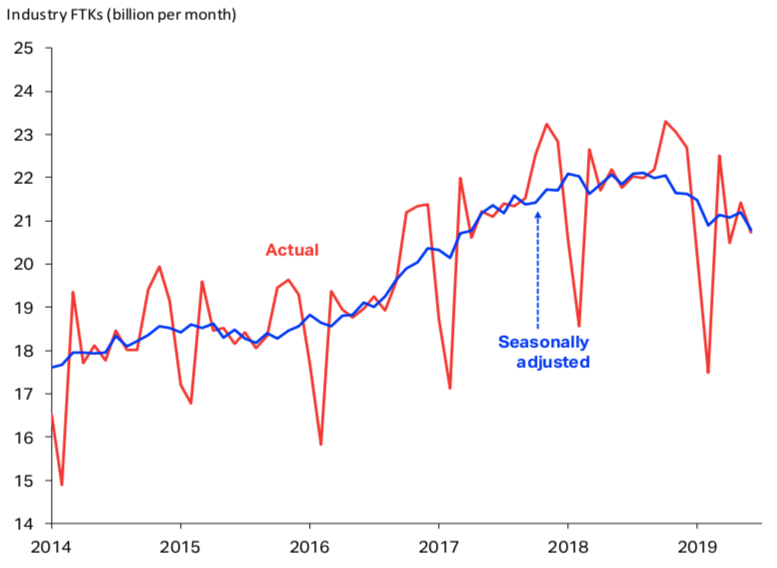 Uncertainty is the killer ingredient for trade and investment

There are conceivably two factors involved in this air freight trend: a broad slowing in many economies, cooling imports and exports, and the flow on impact of the accelerating trade dispute.

In this mix, uncertainty is the common and increasingly dominant feature. Uncertainty leads to reluctance to invest and that, simply and predictably, flows down the line.

President Trump’s recent threat to impose higher duties on a range of Chinese exports can be imagined as having a similar effect to that in a three mile long freight train, when the driver slams on the breaks.

All down the train there is a thud-thud-thud as each truck hits the one in front of it, each creating disruption.

Then, when the driver suddenly pushes the train back into fast forward, the process is repeated in reverse, thud-thud-thud, with each impact creating repercussions for every part of the supply chain.

Those repercussions translate to bankruptcy for some in the supply chain, as payments and commitments become more unpredictable.

Passenger number growth has slowed in most markets, notably Europe; 5.4% is still healthy growth but it is trending downwards. Only Latin America, Africa and Asia Pacific were up, month over month.

International passenger traffic growth, year to May-2019, by region* 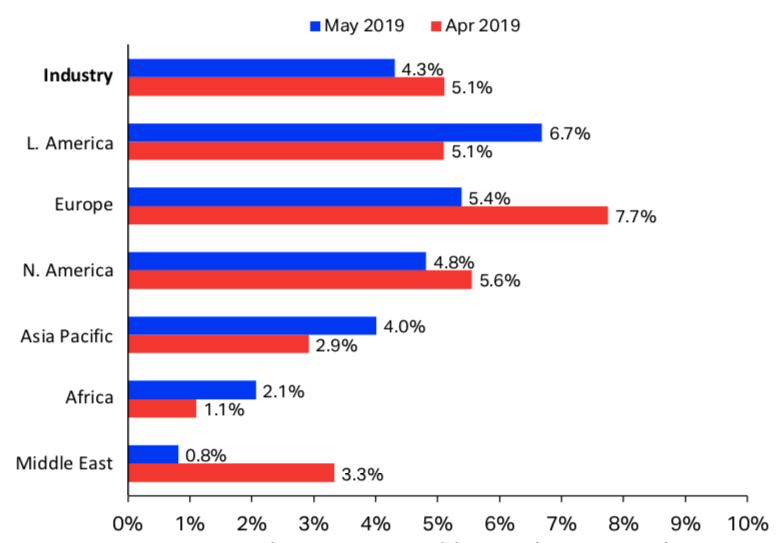 *by airline region of registration

World markets have been skittish for some time

Most of the world’s stock markets take their lead from Wall Street, which in turn is a fair reflection of the world’s most powerful economy. And, fuelled by tax reductions and low interest rates, that economy has been growing strongly for over a year.

More recently, as the trade war has escalated, direct and collateral damage has spread through the world economy.

The 14-Aug-2019 800-point fall in the Dow was the worst single day drop of the year, although the second worst fall, of 768 points had occurred the previous week. Recent behaviour has been for a quick recovery on the following day.
And the index is still well above where it started the year and happily in front of the mini-slump in Jun-2019. 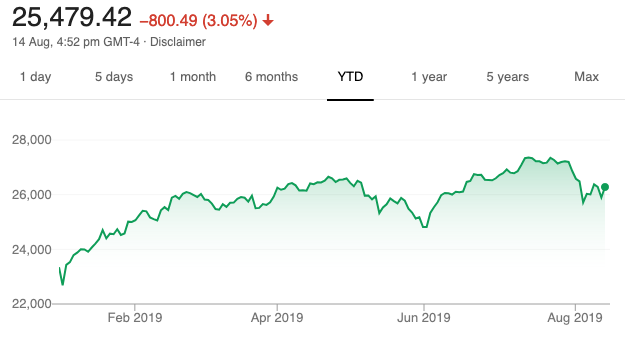 But some US airline stocks have had a less positive year

Despite a solid profit performance in recent years, and professed expectations that high profitability would continue indefinitely, investors have been less kind to the US majors.

American notably has borne the brunt of negative sentiment. 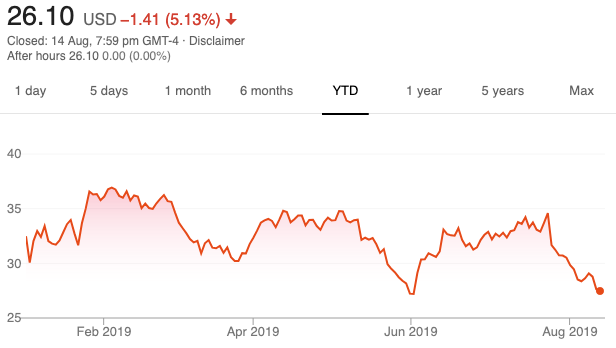 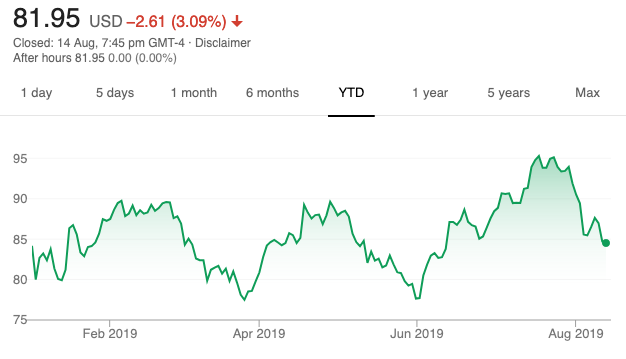 Delta has been a standout, and even when the overall market came down 3%, managed to sustain a slightly smaller fall. 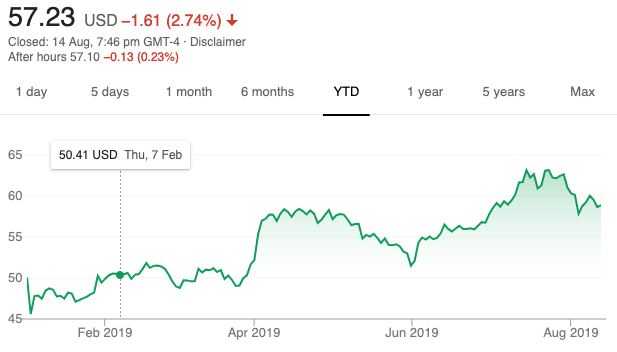 And JetBlue too has been a strong performer, caught in the day's downdraft. 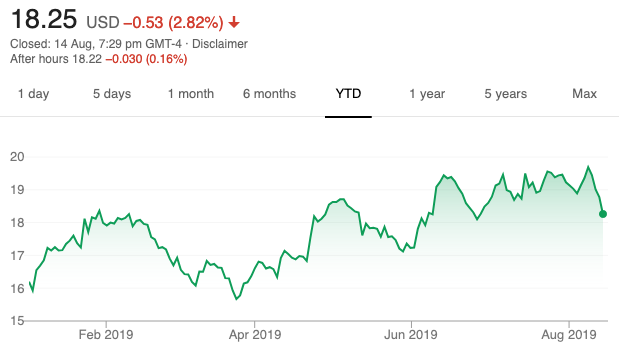 When viewed against generally strong overall share markets, the airline sector has clearly come off its highs of 2017 and 2018, when oil prices were low and traffic was stimulated by lower fares. 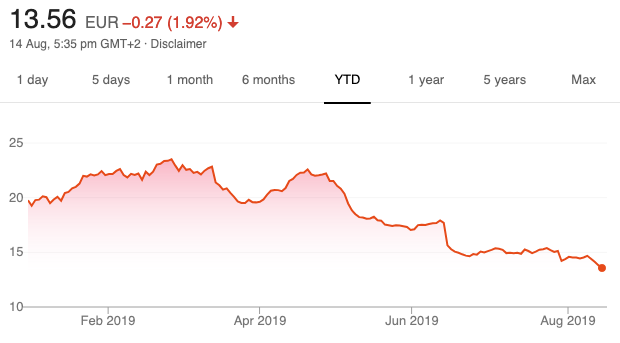 Battered by Brexit, the International Airlines Group share price is down by one third for the year. There may be more to come, as B-Day looms. 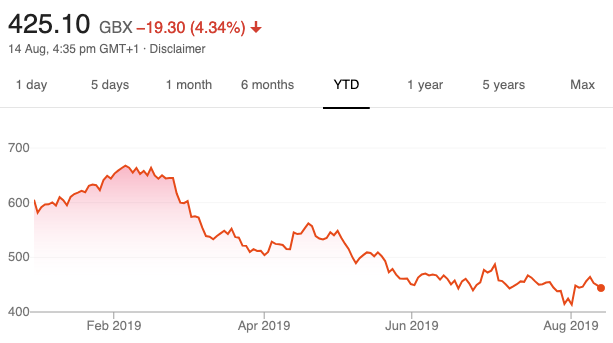 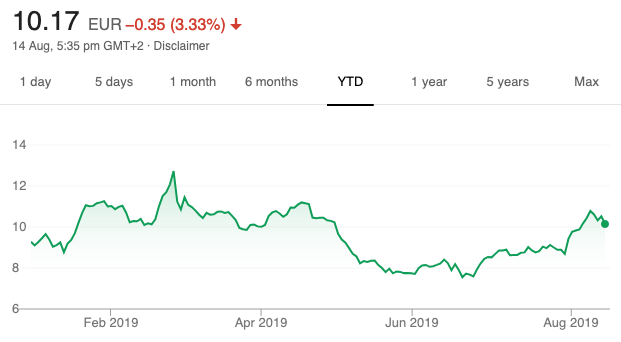 In Asia, steep competition and recent trade insecurity have taken their toll on airline share prices

Although performing sluggishly in 2019, Singapore Airlines has been relatively unaffected by the US uncertainty of the night before. 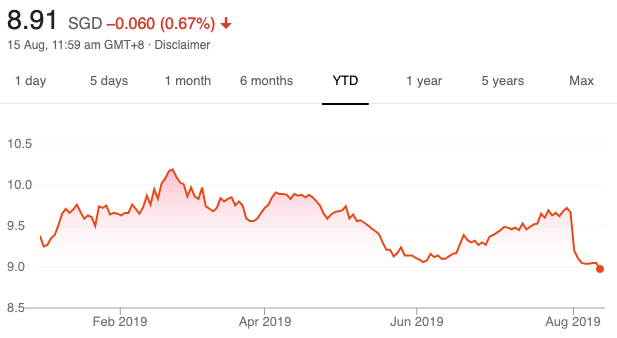 Cathay however has other problems in the short term, as well as being a victim of the freight downturn, a significant earner for the airline.

Its share price is down nearly 6% on the day following the Dow’s 3% fall. 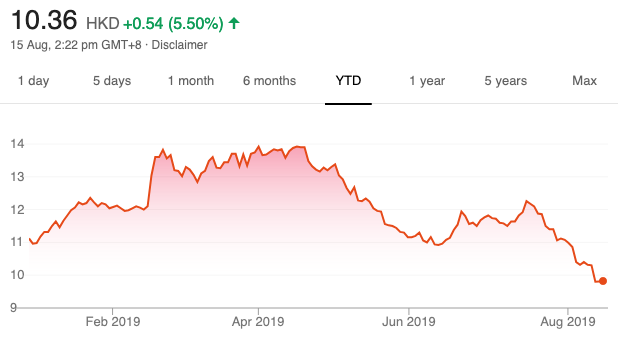 Asia’s largest international airline by passenger numbers is being affected by stern competition in the marketplace. 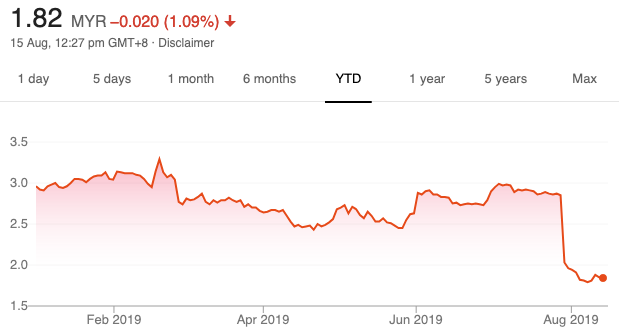 Meanwhile, China’s major airlines are being impacted by slowing overall economic growth in the country. They have however not been greatly affected by the overnight falls on Wall St. 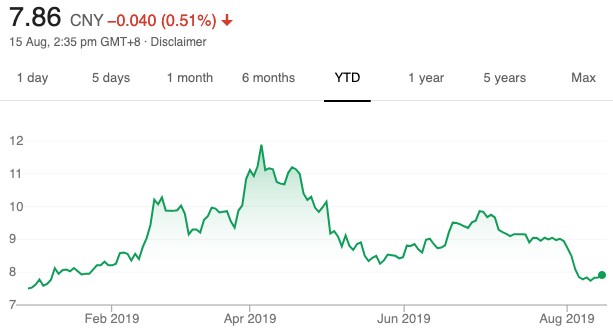 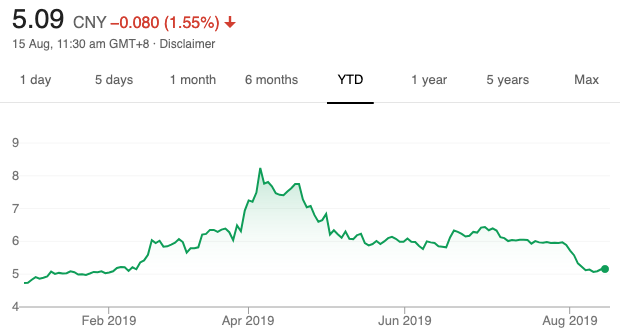 The major airline in the South Pacific, Qantas, dominates its domestic market and until now economic conditions have held up well. But here again, investor fragility in the face of growing uncertainty is evident with its post-Wall Street performance, on 15-Aug-2019. 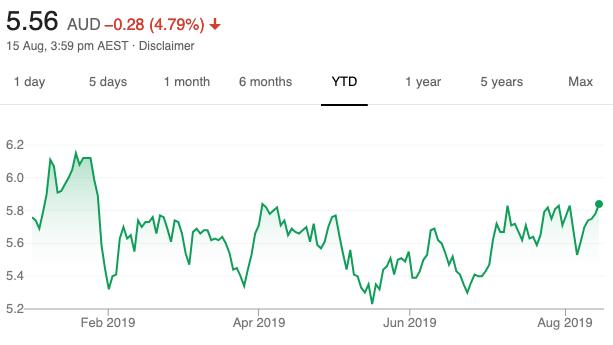 LATAM is spread across several Latin American countries and tends to reflect not only the growing level of competition, but also the strength of the region’s economy. Argentina’s rapid slump manages to pollute some of its neighbours too, notably Brazil, its largest trading partner.

The size of the airline’s share price fall on 14-Aug-2019, more than twice the Dow’s drop, illustrates the sensitivity of investors towards the region’s airline market. 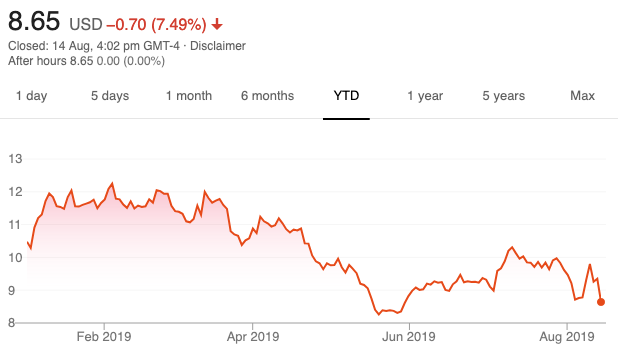 It may be that the markets will rebound quickly. Recent performance would suggest something of a rebound on Wall Street.

But the volatility of the share market and a growing degree of pessimism, especially outside the US, means that any prudent airline will be looking to create a buffer in the event of a slowing in demand.

As outlined in the 15-point CAPA Survival Toolkit report these are some of the pointers for airline strategy in case of a downturn:

And CAPA has also prepared a 12-point Toolkit specifically for LCCs. It can be downloaded here.