Canadian airline WestJet has offered system capacity guidance for 2016 of an additional 8% to 11%, which on the surface may seem ambitious given Canada’s economic climate, and overall global economic uncertainty. But the airline is exuding confidence in its forecast following its financial performance in 2015, after Canada’s economy sank into a recession during the first half of the year.

Perhaps, more importantly, WestJet is assuring that it has levers to pull if demand falters or if Canada’s economic forecast is refined. Those levers include reducing utilisation and decreasing flying during shoulder periods. WestJet is already adjusting its winter schedule for warm weather markets; it experienced capacity pressure on those routes in early 2015.

This should help protect its precious investment grade status. Similar to US airlines, WestJet has also endured decreasing unit revenues in 2015, and is warning that its performance in that metric during 4Q2015 will fall below year-to-date results. Its unit revenue decline for the 9M ending Sep-2015 was 3%.

WestJet’s current 2016 capacity guidance for a year-on-year increase of 8% to 11%, is relatively a wide range.

If the airline reaches the top end of its guidance, it would be the first double digit increase since 2010, when WestJet’s capacity also jumped 11% year-on-year. Its projected system capacity growth for 2015 is 4.5% to 5.5%. 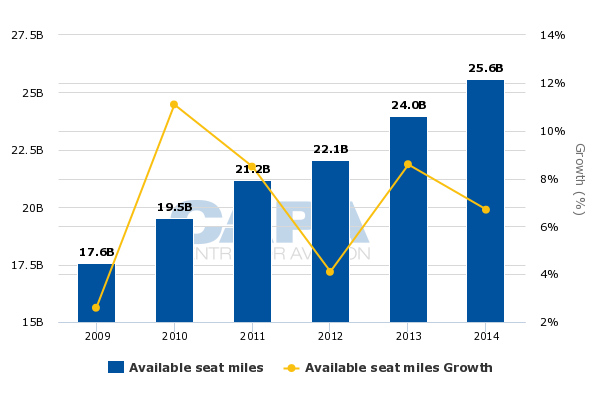 Recently WestJet CEO Gregg Saretsky stated that the majority of the airline’s capacity growth in 2016 is driven by its regional subsidiary Encore and new long haul, trans-Atlantic flights operated with Boeing 767 widebodies. Roughly 3% of the growth is driven by its core Boeing 737 narrowbody operations.

Mr Saretsky emphasised that WestJet’s domestic capacity in 2016 will rise 4% to 6%, which is “significantly moderated from the up 7% this year”.

WestJet’s CEO cited the most recent Bank of Canada economic forecast of 2% GDP growth for 2016. He stated WestJet would apply a multiplier of 1.5 to that estimate to project domestic traffic growth of 3% to 3.5%.

As a reminder, Mr Saretsky explained that during 1H2015 Canada endured a recession with annualised growth of just 1.1%; but WestJet still generated strong financial results. For 1H2015 WestJet’s net profit expanded 43% to CAD202 million (USD152 million), and its operating margin increased 4.1ppt to 14.7%. 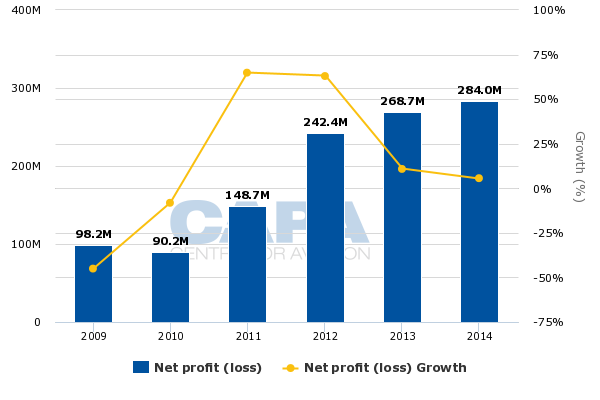 In perhaps an offensive move to counter concerns about WestJet’s planned capacity growth, Mr Saretsky explained if the Bank of Canada’s 2% growth in GDP for 2016 fails to materialise WestJet could reduce utlisation and “pull flying from shoulder periods to accelerate [installation] of our in-flight entertainment and connectivity system”.

WestJet is already refining its strategy for the shoulder season for flights to warm weather markets for the 2015-2016 winter season. During 1Q2015 WestJet estimated that industry capacity from Canada to the Caribbean and Mexico was up 11%, and with that level of growth, pricing and margin pressure ensued.

WestJet for the 2015-2016 season is delaying the start of its winter schedule for Southern markets into mid-Dec-2015 versus introducing those flights in Nov-2014 for the 2014-2015 season. “We’’re taking advantage of the peak and we’re parking some of that flying where we would expect demand to be softer in the shoulder,” said Mr Saretsky.

Data from CAPA and OAG show that for the week of 9-Nov-2015 WestJet’s seats on offer between Canada and the Caribbean are down 21% year-on-year. Air Canada’s seats have risen 10% and Air Transat has posted a 19% increase. Sunwing’s seats have fallen 10% year-on-year. Overall, seats between the two regions are down 4% to approximately 52,038.

Between Canada and Mexico, WestJet’s seats have fallen 1.2% year-on-year. Air Canada’s have grown nearly 30% year-on-year and Air Transat and Sunwing have posted increases of 26% and nearly 6%.

WestJet is marking a milestone in 2016 when it launches widebody flights to London Gatwick from six Canadian cities – Toronto, Vancouver, Calgary, Edmonton, Winnipeg and St Johns. The push to Gatwick is obviously playing a large role its capacity projections for 2016.

(Note: CAPA will take an in-depth look at WestJet’s long haul strategy in a forthcoming report)

Based on statistics supplied by Mr Saretsky, WestJet is confident its new widebody flights debuting in 2016 will produce favourable results. He stated that in 2015  WestJet’s ASMs to Europe jumped 150% year-on-year, and the airline generated a 180% increase in traffic.

Using exchange rates of the CAD up 12% against the GBP and 13% against the EUR, Mr Saretsky said that “Canada is a bargain. We expect it to be a bargain in 2016.”

As the stage length of the widebodies creates some drag on WestJet’s unit revenues, part of the decrease should be offset by ancillary sales. The airline is introducing a checked bag fee on international flights and increasing prices of pre-reserved seating based on distance flown. WestJet estimates those initiatives should generate CAD15 million (USD11 million) to CAD25 million (USD19 million)  in annual revenue. During 3Q2015 its top line ancillary revenue increased 76% to CAD90 million (USD68 million).

WestJet’s short term unit revenue pressure will continue at the end of 2015. Airline executives warned its unit revenue performance during 4Q2015 would be worse than the 3% decline the company posted for the first nine months of 2015. The main drivers of the decline are new markets under development in 2015 and some effects from the weaker economies in Alberta due to the collapse in energy prices.

The number of new markets introduced in 2016 will fall year-on-year from 22 to 13, “so the percentage of our network that is under development is reduced year-on-year,” Mr Saretsky concluded.

The company begins to annualise the new market growth in 2Q2016, and Mr Saretsky stated he would expect to see unit revenue pressure continue until that time. Similar to most North American airlines experiencing unit revenue pressure, WestJet is not offering a timeframe for a return to a positive performance. But the general consensus among those airlines is that unit revenues will not reach a positive trajectory until 2H2016 at the earliest.

Alaska recently outlined a projection of 8% capacity growth in 2016, which is higher than the US industry average.

Both airlines have arguably stellar financial records during the last few years, and have weathered numerous weak cycles during those times. More importantly, neither company will take steps to jeopardise its investment grade rating. It is still early to firmly crystallise growth for 2016, but each airline will no doubt refine their targets downwards if demand trends change and economies weaken.

WestJet is sending a clear message in that direction to allay concerns that its growth is too rapid as global economic uncertainty remains an overhang.