Canadian airline WestJet during 2H2015 marked the second anniversary of its regional subsidiary Encore, an airline designed to allow WestJet to tap new sources of revenue within the Canadian domestic market and flesh out its schedule to make it more desirable for the business passenger segment.

WestJet has stuck to its plans for Encore expansion, launching in Western Canada and then setting its sights on the Eastern region of the country culminating with a push from Halifax in 2015. Encore’s network composition is a mix of stand-alone stations and markets where it operates alongside mainline narrowbodies to improve schedule integrity.

Encore is fuelling at least half of WestJet’s capacity growth in 2015, and WestJet management has found itself defending Encore’s growth amid a shaky Canadian economy, stressing that the growth was justified given the regional operator’s stimulative effects. That growth continues in 2016 when Encore enters its first US transborder market, Boston.

Encore will operate 25 Bombardier 78-seat Q400 turboprops by YE2015, growing to 34 by YE2016. Previously, WestJet has stated that by Oct-2015 Encore’s schedule would include 146 daily departures from roughly 31 stations.

Documentation in a recent investor presentation shows that by by Apr-2016 daily departures would reach 176 from 32 stations. WestJet executives, however, have indicated that Encore could reach 190 daily departures from 35 stations around that time period.

WestJet offered that forecast at the end of 2Q2015, and since that time some forecasts for Canadian economic growth in 2015 have been revised downwards to 1.2%. WestJet’s logic is that Encore’s entry into new markets has resulted in average fares falling 20% to 40% and traffic volumes growing 40% to 55% year-on-year. Using that reasoning, WestJet CEO Gregg Saretsky believes there is a huge growth multiplier with Encore, and at the end of 2Q2015 stated the company was not apologising for Encore’s growth.

The outlook for travel in Canada appears mixed. Although a recent report by The Conference Board of Canada concluded that Canada’s economy contracted for the first two quarters of 2015, the Board also stated that during 1Q2015, domestic tourism demand for air transport was up 9.7% year-on-year. Some of the growth of was driven by the depreciation of CAD against the USD, which makes it more expensive for Canadians to travel across the border in search of cheaper air travel.

Still, WestJet’s capacity growth of 6% for the first nine months of 2015 outpaced the nearly 4% rise in traffic, resulting in a 1.8ppt decline in load factor to 80.9%.

WestJet estimates the value of the regional market in Canada at CAD2.5 billion, and as previously reported by CAPA, it is a sector that the company could not ignore given Air Canada’s dominance in many regional markets. WestJet mainline and Encore operate from many of the same origins, but there are roughly eight markets where Encore flies exclusively – Terrace, Fort St John, Nanaimo, Kamloops, Penticton, Brandon, Thunder Bay and Fredericton.

WestJet operates service to its first and third largest bases Calgary and Vancouver from Terrace and Fort St John. From Brandon, Nanaimo, Kamloops and Penticton it operates service to Calgary. Encore’s offerings from Thunder Bay include Toronto Pearson and Winnipeg, and the airline also serves Pearson from Fredericton. 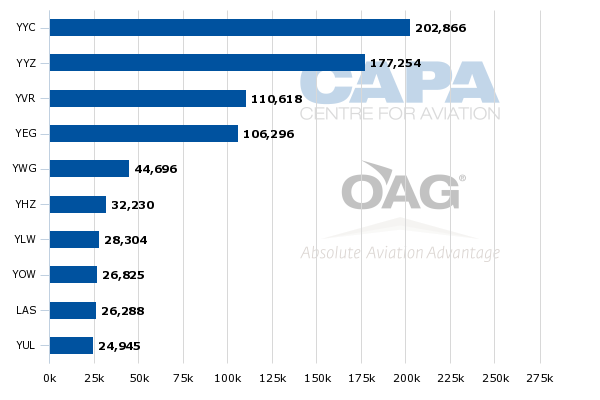 The Terrace-Calgary route is a new addition for both Encore and Air Canada in 2015. Air Canada has also added Nanaimo-Calgary in 2015, and WestJet has introduced the Fredericton-Pearson routing. According to data from CAPA and OAG for the week of 21-Sep-2015 to 27-Sep-2015 WestJet’s Encore has the leading seat share in five of those markets – Terrace-Calgary, Terrace-Vancouver, Nanaimo-Calgary, Kaloomps-Calgary and Thunder Bay-Winnipeg.

Some airports where Encore has launched flights have seen an increase in passenger throughput. In Apr-2015 the British Colombia Aviation Council stated that passenger numbers at Fort St John had nearly doubled during the past three years, and Nanaimo Airport posted record high passenger levels in 2014 of 220,000.

Other new route additions for Encore in 2015 include Quebec-Toronto and Edmonton to Nanaimo. WestJet competes with familiar rival Air Canada on service between Quebec and Toronto Pearson and is uncontested on the new service to Nanaimo.

WestJet has also added new Encore service from Ottawa to Moncton in 2015, joining Porter and Air Canada on the pairing. Data from CAPA and OAG for the week of 22-Sep-2015 show that there are a total of roughly 1,396 one-way weekly seats offered on the pairing. Air Canada holds a 26% share, Porter a 35% share and WestJet’s share is 39%.

WestJet is also bolstering frequencies on some Encore routes in 2015, particularly from Edmonton. During Oct-2015 to Dec-2015 WestJet is expanding from Edmonton to Regina, Grand Prairie, Kelowna and Saskatoon. According to Airline Route, the service to Kelowna will increase from three to four daily flights, split evenly between mainline and Encore. The frequencies to Regina and Saskatoon are growing from two to three, all operated by Encore, and Encore’s frequencies between Edmonton and Grand Prairie are increasing from 14 to 23 weekly.

Encore has also undertaken an expansion from Halifax airport in 2015, adding service to Deer Lake, Sydney and Gander, again upping competition with Air Canada, but WestJet’s larger rival retains the majority seat share on all those routes, reflecting Air Canada's strength in Eastern Canada. Encore frequencies have also been added to Boeing 737 narrowbody service from Halifax to Ottawa and St Johns.

Porter Airlines deploys approximately 3,360 one-way seats from Billy Bishop Toronto airport to Boston. Average fares are likely to fall with WestJet’s entry, which will pressure both Air Canada and Porter. It could particularly challenging for the much smaller Porter.

Boston is Porter’s second largest destination measured by seat deployment, and its fleet of 26 Bombardier Q400s is just one aircraft larger than Encore. Moreover, Encore has the benefit of feeding at least some passengers through Pearson and Halifax.

WestJet often states that Encore could grow to 45 aircraft. It has nine purchase options available with Bombardier through 2018. Many factors will drive the decision to exercise those options including the state of the Canadian economy and if the stability of demand in the Canadian domestic market and US transborder routes, two areas that have endured some pricing dilution and competitive capacity pressure during the last couple of years.

Encore’s development and roll-out arguably went smoothly, and it seems to be serving the purposes that WestJet intended.

With the inauguration of its first long-haul service to London using Boeing 767 widebodies in 2016, perhaps WestJet should digest Encore’s growth and focus on the successful deployment of twin aisle aircraft before declaring its intentions to expand its regional aspirations further, notably where a significant battle is likely.