Kuwait National Airways was flat on Monday (19-Apr-2010), after subsidiary, Wataniya Airways announced an agreement to extend a USD34.7 million credit facility with Burgan Bank for one year from the original due date of 30-Apr-2010. The credit facility will be increased to USD52.1 million due on 30-Apr-2011.

Also in the Middle East, Royal Jordanian was flat, while Jazeera Airways (+2.9%) was the day’s only gainer. Air Arabia (-2.9%) meanwhile took the day’s biggest fall, given its exposure to European aviation through its Air Arabia Maroc unit.

In Africa, Kenya Airways (-1.7%) was down again, after it was forced to continue cancelling services to Europe, as European airspace remained closed. Kenya’s All-Share Index closed down 0.1%, ending three consecutive sessions of gains.

Lonrho (-1.8%) was also down, following news it is reportedly considering moving its primary stock market listing from London to Hong Kong. The company is reportedly looking for better coverage of its African-focused stocks, as part of to plans to expand the company into a USD1 billion turnover, USD1 billion market valued company.

Lonrho owns Kenyan LCC, Fly540, through a JV with the Kenyan Government. The carrier plans to open a new hub in Angola this month and is reportedly considering opening another hub in northern Africa, potentially in Egypt.

1time Holdings (-2.7%) and Comair (-1.9%) shares also tumbled, pushed lower by South Africa’s JSE (-1.1%). The index was down with wider international markets and a drop in major South African lenders’ shares. 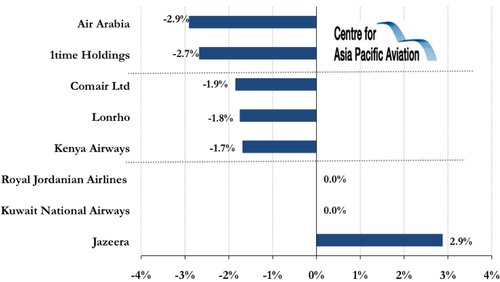