During 4Q2009, Vueling posted break-even EBIT for the first time in a fourth quarter (with a loss of EUR0.5 million, excluding restructuring costs of EUR16.7 million) representing a 13.3 ppt margin improvement from the negative. Net losses in the quarter, however, totalled EUR13 million, a 23% year-on-year reduction. Also in the quarter, revenues increased 84% year-on-year to EUR160 million.

Vueling handled 2.4 million passengers in 4Q2009, a 105% year-on-year increase, as capacity (ASKs) was increased 90% and Vueling’s network was expanded to include 92 routes (+54% year-on-year). With the merger, Vueling is now the largest carrier at three of its six bases (at Barcelona, Sevilla and Bilbao).

Looking forward, Vueling expects continued ex-fuel CASK reductions in 2010, with an improved net result also anticipated. As the carrier completes its merger process, which is expected to deliver cost synergies of EUR15.5 million in 2010 and revenue synergies of EUR20 million in 1H2010, the LCC’s cash reserves are expected to increase significantly (the carrier had EUR121 million in cash as at 31-Dec-2009, including proceeds from a EUR13 million credit line).

In other LCC financial news, Nok Air stated it expects to report a profit of USD9.1 million in 2010, down 21% year-on-year due to increased oil prices.

The carrier also expects to handle 3.2 million passengers, up 39% year-on-year, as the LCC increasingly operates more domestic services for parent, Thai Airways. Nok and Thai have signed an MoU for codesharing and the development of a two-brand strategy, as part of plans to more effectively compete with foreign LCCs entering Thailand. Nok Air also plans to resume international services in the next two years.

You can keep in touch with all the LCC news from around the world every morning with Peanuts Daily. 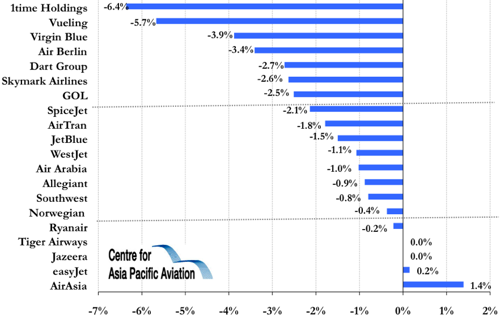