VivaAerobus plans a transborder push. Is this the start of new phase for Mexico's quieter LCC?

Mexican low-cost airline VivaAerobus is making a US transborder push in 2H2014 after flirting with the market during the past few years with various routes that were ultimately culled.

Presently VivaAerobus operates a single transborder route, offering flights from its base in Monterrey to Houston Intercontinental. Its decision to re-launch some transborder flights and enter into new US markets is likely driven by its introduction of more fuel efficient Airbus A320s during 2014, and challenges faced by all Mexico’s domestic airlines in recovering pricing traction as a result of tenuous economic conditions in the country.

Armed with newer aircraft and a knowledge of transborder market dynamics, VivaAerobus has a reasonable chance of success on its new routes. But in some of the markets it faces familiar competitors that are also looking to improve their fortunes by exploiting opportunities for better margins from transborder service.

VivaAerobus has logged slower growth than its Mexican LCC peers

VivaAerobus’ passenger growth has slowed during the past couple of years, increasing about 4% year-on-year in 2013 to 3.8 million, according to Mexican DGAC data. That compares with 20% growth for rival Volaris to 8.5 million and an approximate 16% increase for Interjet to 8.4 million passengers transported. 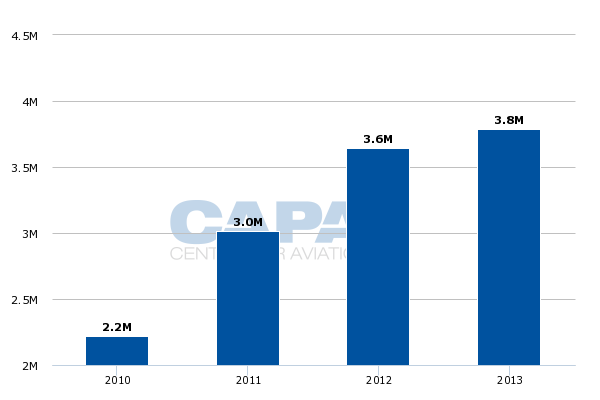 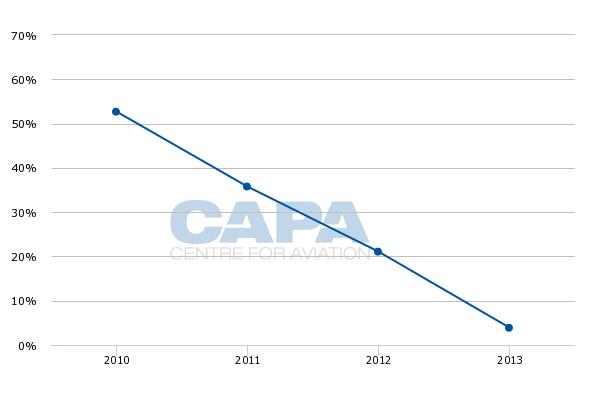 During the first seven months of 2014 VivaAerobus transported roughly 2.2 million domestic passengers. According to Mexican DGAC data, VivaAerobus’ passenger numbers declined 2% in Jan-2014, 5% in Feb-2014 and 21% in Mar-2014.

But between Apr-2014 and Jul-2014 VivaAerobus logged steady growth each month, which resulted in its year-on-year passenger growth remaining essentially flat for the seven months period. The more recent growth was driven by the introduction of A320s. 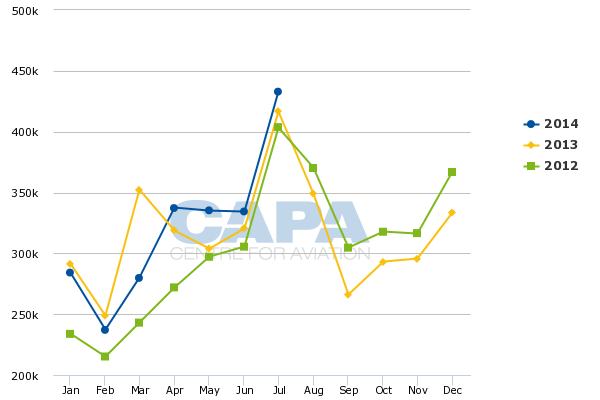 In recent months the US market has accounted for only about 5,000 to 6,000 or less than 2% of VivaAerobus' total monthly passenger numbers. Its current international traffic figures are less than half what the airline carried in 2012.

If the new transborder routes launched over the next few month stick, VivaAerobus should be able to at least reach and possibly exceed the 2012 figure next year. 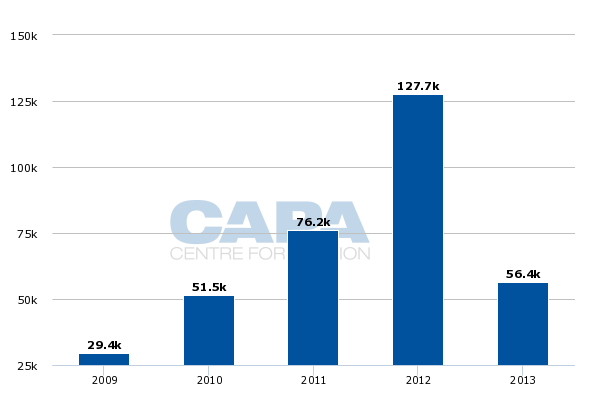 VivaAerobus undertakes a fleet renewal during weak environment in Mexico

Mexico’s two publicly traded airlines Aeromexico and Volaris battled tough domestic market conditions during 1H2014 as their yields during that period fell 13% and 15%, respectively. Volaris also recorded a 16% drop in its average fare during that time period as it cited a decline in Mexican consumer confidence. (Yield data for VivaAerobus is not available as the airline is still privately owned while Aeromexico and Volais are now publicly traded.)

Volaris and VivaAerobus follow a pure low-cost model, so it is not likely a stretch to conclude that VivaAerobus has also struggled with pricing within the domestic market as the price-sensitive travellers each airline targets are likely to hold onto their discretionary spend until economic conditions improve, unless fares are relatively cheap.

At the same time Mexican airlines are facing challenges in achieving pricing traction, VivaAerobus in 2014 is undergoing a transition as it starts a crucial fleet renewal with the delivery of Airbus A320 narrowbodies.

VivaAerobus in late 2013 placed an order for 52 Airbus narrowbodies – 12 current generation jets and 40 A320neos. The first six of these aircraft are expected in 2H2014, with deliveries of new aircraft continuing to 2021. It aims to complete its transition to an all Airbus fleet by the end of 2016.

CAPA’s Fleet Database shows that VivaAerobus currently has five A320s, all of which have been leased in ahead of the first delivery from its order directly with Airbus. The decision to accelerate the start of A320 deliveries by supplementing its order with leased aircraft should drive some fleet efficiency improvements for the airline in 2014 as well as capacity growth. VivaAerobus’ A320s are configured with 180 seats in an all economy class layout compared with the 149 seat 737-300 Classics flown by the airline.

VivaAerobus Fleet Summary as of 9-Sep-2014

As previously reported by CAPA, typically VivaAerobus has had large capacity fluctuations depending on the time of year due to its older fleet. With the number of A320s growing during the next few years, VivaAerobus should have less seasonality in its operation.

VivaAerobus opts to give some US transborder markets a second try

With its fleet transition now underway, VivaAerobus is making a transborder push in 2H2014, re-launching flights from Monterrey to San Antonio and Las Vegas, as well as introducing new flights from Houston Intercontinental to Guadalajara and Cancun.

VivaAerobus has briefly served some transborder markets throughout the years, operating flights from its base in Monterrey to Austin, Chicago Midway, Las Vegas, Miami,  Orlando and San Antonio. Its first foray into the US came with Austin in 2008, before LCC rivals Volaris or Interjet launched international services. But it pulled out of the Austin market, which it served from Monterrey and Cancun, in 2009 just barely a year after introducing service.

The airline’s pared down international footprint is reflected in its roughly 1% international market share among Mexican airlines from Jan-2014 to Jul-2014. Groupo Aeromexico represented a 66% share, followed by Volaris at 22% and Interjet at 11%.

Mexico’s airlines transported approximately 4.4 million international passengers between Jan-2014 and Jul-2014, a nearly 16% increase year-on-year, and higher than the 8% growth recorded in the domestic market. However, foreign airlines (primarily US carriers) still account for a sizeable portion of Mexico’s international market, transporting 15 million passengers from Jan-2014 to Jul-2014.

With robust growth among Mexican airlines operating on international routes, VivaAerobus likely sees an opportunity to take another stab at build up its share in the international market now that it has newer aircraft that feature an updated cabin interior versus the 737 Classics and better fuel consumption.

Monterrey-Houston has been VivaAerobus’ only transborder route with staying power. The airline has operated in the market since Jul-2010 and presently holds a 25% share of the roughly 3,600 one-way weekly seats available between the two cities (according to data from CAPA and OAG for the week of 8-Sep-2014).

VivaAerobus will break United’s monopoly on flights from Houston to Guadalajara and Cancun. United currently offers about 2,220 weekly one-way seats from Guadalajara to its Houston hub and about 3,800- seats between Houston and Cancun. 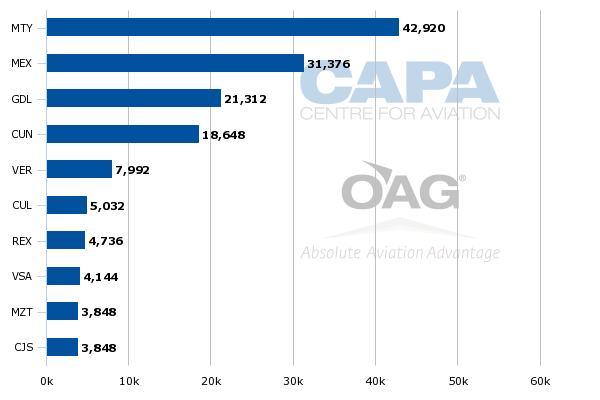 VivaAerobus faces Aeromexico and Interjet on transborder flights from Monterrey

VivaAerobus faces familiar competitors on flights from Monterrey to San Antonio and Las Vegas, where it is offering four weekly flights in each market. Presently (the week of 8-Sep-2014), Aeromexico accounts for approximately 34% of the 900 weekly one-way seats deployed between Monterrey and Las Vegas and Interjet holds a 66% share.

On flights presently operated from Monterrey to San Antonio, Aeromexico represents 53% of the roughly 650 one-way seats on offer and Interjet accounts for a 43% share.

In theory VivaAerobus targets a more cost-conscious passenger segment than Aeromexico and Interjet, both of which target a mix of leisure and business travellers, and should be able to garner a higher fare.

As it unveiled plans to restart flights to San Antonio, VivaAerobus concluded that the service to and from Monterrey would benefit Mexican passengers that currently opt to travel by road to San Antonio, and benefit US nationals that are seeking lower fares to Monterrey, which is Mexico’s third largest metropolitan area.

The obvious risk with the restart of transborder flights is ensuring enough demand exists for point of sale Mexico. VivaAerobus is going to have to offer price points that will stimulate demand in a sluggish environment, which may not bode well for revenue improvement. But VivaAerobus for the moment could be setting the stage to raise its international profile to create benefit over the medium term, and be willing to endure some short term pain as it works to diversify its network.

So far VivaAerobus has had no real coordination with VivaColombia. Both airlines are partially owned by Irelandia Aviation and Mexican bus company IAMSA. VivaColombia launched operations in Colombia's domestic market during 2012, and the airline recently launched its first international services.

At this point VivaAerobus has only announced transborder service. If it opted to serve Colombia, VivaAerobus could tap VivaColombia’s growing domestic network. Or if VivaColombia introduced service to Mexico, it could have some inroads in Latin America’s second largest aviation market. Somewhat surprisingly, Interjet has beat the Viva group in becoming the first LCC to link Mexico City and Bogota.

Perhaps some coordination is planned in the medium term as VivaAerobus completes its fleet transition to Airbus as VivaColombia has always operated A320s. VivaColombia also now seems poised to revisit an IPO in 2015 after cancelling plans for a USD200 million public offering in early 2014. Additionally, each airline may be waiting to build up more scale in the respective home markets before opting to launch formal ties with one another.

VivaAerobus has much to prove as it looks to transborder expansion

VivaAerobus’ new foray in the transborder marketsshows some initiative as the airline’s strategy has been in question for some time. Its fleet renewal is expected to be the start of a new phase of growth for the airline that carries the obvious risk of improper execution.

While riskier than domestic expansion the planned transborder expansion is still a relatively low-risk venture. If the routes fail to reach maturity in a reasonable amount of time, VivaAerobus could deploy the capacity back into the domestic market, where some slight signs of improvement are emerging. VivaAerobus has done this a couple of times in the past after earlier forays into the US market proved to be unsuccessful.

There is also now the option of transferring some of the aircraft on order to VivaColombia if market conditions fail to improve significantly. VivaColombia has not yet ordered any aircraft and has so far relied on leasing companies.

One looming question that remains unanswered in the Mexican domestic market place is if three low-cost airlines can thrive over the long term. The recent weakening conditions have raised some questions about potential consolidation. But for now Interjet, Volaris and VivaAerobus seem bullish on their long-term prospects.

As Interjet and Volaris have worked quickly to build their respective domestic shares in Mexico, VivaAerobus still has much to prove – in both the domestic and international markets.