Virgin Australia has announced the introduction of a new fare structure, which the airline claims will deliver “innovative pricing together with greater flexibility, simpler choices and better value”. The revised structure is part of the overhaul of the Virgin brand and a key step in simplifying another fragmented part of the company’s product.

The new fare structure will see the number of fare options reduced to three from the previous five options. The former fare offering was complicated and user unfriendly, reminiscent of the airline’s strategy to play in all travel markets simultaneously. At the bottom, “Go!” fares included only the seat and carry-on luggage, with zero booking flexibility and no perks, while at the other end, “Premium Economy” fares offered included all (then-available) perks, full booking flexibility and a standard economy seat that had been slightly modified for the corporate client. Between “Go!” and “Premium Economy”, Virgin Blue also offered “Blue Saver”, “Flexible” and “Corporate Plus” fares.

Virgin Australia’s new fare families should allow the airline to more cleverly market its new product: the fare labels are recognisable and easy-to-understand and can be used more effectively to target the airline’s main clientele, the leisure and the corporate traveller. As Virgin noted, the fare options offer simpler choices and better value.

Passengers on Virgin Australia, Pacific Blue and Polynesian Blue services will now have the option of purchasing Saver, Flexi or Premium fares. The fares broadly fit into the short-haul LCC economy service, a short-haul premium economy product and a short-haul business class product, respectively. No changes will be made to V Australia, the group’s long-haul unit, whose hands are increasingly tied by joint venture arrangements with Etihad and Delta Air Lines (future).

“Saver” is the base fare, including the seat and carry-on luggage. The fare allows the purchase of checked baggage, in-flight entertainment, food and drink, and limited booking flexibility, allowing the passenger to cancel or change the journey up to 24 hours before the scheduled departure. A fee applies for this service.

“Flexi” offers a level of service that more closely resemble the Virgin Blue business class product. It includes 23kg of checked baggage (32kg for Gold Velocity members), food and drink, priority check-in and a fully flexible fares. No fee applies for changes made to the booking.

“Premium” is Virgin Australia’s new business class offering, and a key part of CEO John Borghetti’s plans to increase the airline’s share of the Australian corporate market. The fare option includes all the aforementioned perks, but with unlimited food and drink, 69kg of check-in baggage and access to Virgin Australia lounges.

Virgin Australia’s revised fare structure closely aligns it with partner Air New Zealand’s fare offering on its short-haul network, which it has aptly named “Seats to Suit”. The New Zealand flag rolled the product out across its entire short-haul network in Sep-2010, following a successful trail of the offering on its Christchurch-Sydney route. Air New Zealand said in Feb-2011 the product has been successful, with its bookings on routes across the Tasman up 15% year-on-year. The airline said the positive trend is a positive sign ahead of its trans-Tasman tie-up with Virgin Australia, which is scheduled for a 01-Jul-2011 launch.

“Seats to Suit”, like Virgin’s new fare product, is aimed at allowing Air New Zealand to tailor each flight to passengers’ demands, providing access to cheap base fares, then pay for perks such as food and drink, baggage, booking flexibility and in-flight entertainment. The two carriers’ fare options are more or less identical. The most notable difference is Air New Zealand’s four fare options to Virgin’s three, but Virgin has simply combined Air New Zealand’s “Seat” and “Seat + Bag” options, between which there is always a AUD/NZD20 price difference, into its “Saver” fare, with an optional AUD/NZD20 charges for checked baggage. The two new fare products are highly compatible, easy-to-understand and recognisable. This reflects the ongoing integration of the two carriers’ short-haul networks and strategy in the highly competitive trans-Tasman market. 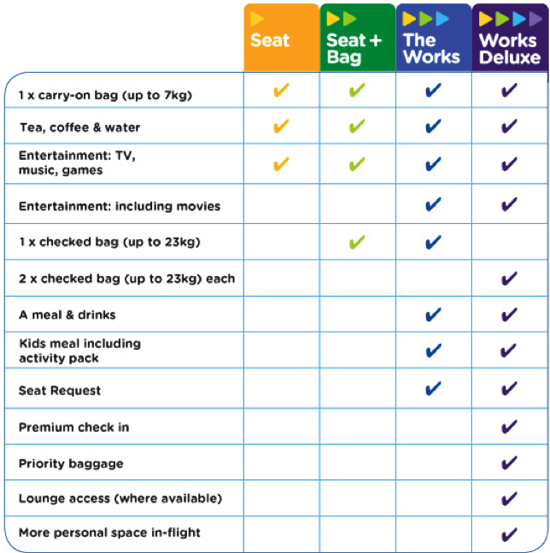 Air New Zealand’s stronger than expected response to the “Seats to Suit” product would have made Virgin Australia’s transition to a similar product straightforward. Air New Zealand stated in Feb-2012 that it will tweak the leg room in some of its trans-Tasman seats in response to complaints from corporate clients, the sector of the market the two carriers’ are explicitly targeting in their alliance.

Air New Zealand CFO Rob McDonald said the airline would take out half a row to increase seat pitch on one side of the aircraft to the exit row to give a 33-34 inch pitch. Despite the complaints, Mr McDonald was confident ahead of the alliance launch, saying that “there's lot of work going in from both sides - just the various aspects, the IT, the frequent flyer, the product alignments and things like that - so we're very much aiming for July 1 start and that looks…quite achievable."

Below is an example of the airlines’ fare options on its Sydney-Auckland route for travel on Friday 24-Jun-2011. The similarities in price and fare options are clear. Their joint venture commences on 01-Jul-2011. 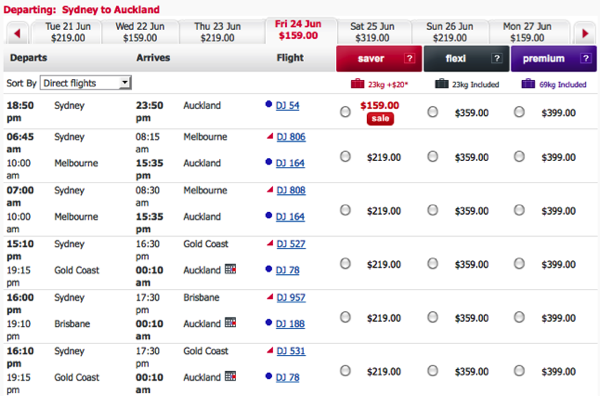 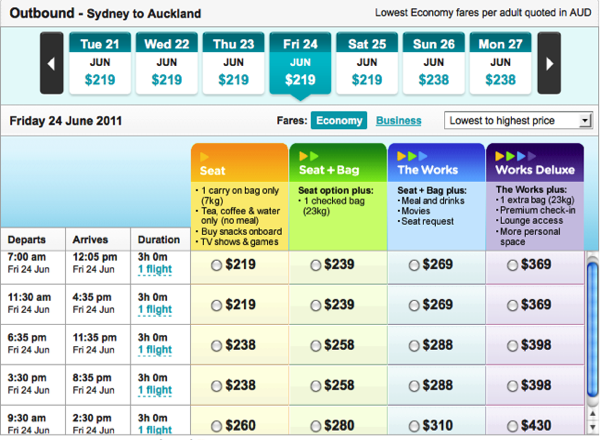 Jetstar, Air New Zealand and Virgin Australia’s largest rival in many respects, has also recently overhauled its fare structure. The LCC announced on 17-May-2011 the launch of "new and simple fare options", also aimed at giving passengers more choice, flexibility and of course, lower fares. The LCC is replacing its JetSaver Light, JetSaver, JetFlex and JetPlus fare classes, with a single economy class "Starter" fare, which includes only the seat and carry-on baggage. Passengers can then tailor options to their preferences. "Plus" fares, in a clever move to leverage the might of the Qantas Frequent Flyer Programme, incorporate Qantas FFP points and Status credits, free standard seat selection and a waiver of change fees, with "Max" fares also incorporating upfront and/or extra leg room seating and refundability. Qantas Frequent Flyer Points will be available on all fare bundles.

Announcing the changes, Qantas CEO Alan Joyce stated the “intention here is to leverage the Jetstar network for some of our corporate market which is telling us that they'd like to earn Qantas frequent flyers points and status credits when they're travelling to markets that the Qantas brand isn't on. The group benefits are going to be quite considerable. It doesn't matter what the competition is doing in my mind - if Qantas plays its best game, I think Qantas is going to win."

Jetstar CEO Bruce Buchanan said the changes in seat selection “are about making sure that our structure enables us to drive ancillary revenues...and making sure we've got products that really resonate with consumers. Even in a low-yield environment we're getting record ancillary revenue numbers but we're still getting our costs down and those two are enabling us to profitably deliver low fares."

The move by airlines to unbundle, which has been the mantra of LCCs for decades now, to re-bundling into “fare families” is another phenomenon in the evolution of the airline model and highlights the convergence between LCCs and legacy carriers. (“Full-service” mightn’t be a fitting description of legacy carriers anymore). The re-bundling trend, however, highlights a development in a major revenue driver for LCCs and legacies alike: ancillary revenues. Ancillaries represent an increasingly lucrative revenue stream but most importantly one that flows right to the bottom line. It’s a revenue stream that all both LCCs and legacies try to maximise and the one that passengers, particularly at the leisure end of the market, tend to dislike the most.

Somewhat paradoxically, while consumers remain highly price-elastic with regards to base fares, they appear much less price sensitive when it comes to reaching for the wallet for add-ons and extras. Jetstar, among others, has actually noted that lowering base fares can be revenue positive as demand is stimulated and capital is recovered through purchases of other items. CEO Bruce Buchanan has siad ancillary revenues had increased from AUD2-3 per ticket to the mid-AUD20s "in the space of a few years" and continue to grow "very fast", indicating there may be some way to go yet.

Having the right systems available to tailor fares has long been a critique by airlines seeking to grow ancillaries, particularly from the low-cost sector, whose initiatives to grow ancillary revenue outpaced the required technological developments. But advanced in this area have been and airlines can now offer fare customisation, providing a bundled fare to be targeted to the right customer at the right time and perhaps most importantly, at the point of purchase. Many customers are likely to prefer paying for add-ons at the time of fare purchase (online) rather than on board aircraft, where simply accessing a wallet can be a bothersome and the act of handing over cash or plastic for a questionable meal may be deterrent.

Competition to heat up

Qantas will continue with its two-brand strategy, with Jetstar targeting the leisure end of the market and Qantas the premium, a strategy that has been enormously successful for the group, particularly in short-haul markets.

Jetstar CEO Bruce Buchanan stated in May-2011 that Virgin’s move upmarket is opening up opportunities for Jetstar, with the LCC likely to leverage its lower cost base to move into markets the refocused Virgin is no longer looking. Jetstar’s new fare structure will put pressure on the Virgin Australia-Air New Zealand combination in short-haul markets. It’s a similar offering, and one which resembles the old Virgin Blue fare structure, but with some key improvements, such as the offer of Qantas frequent flyer points. The Jetstar fares offer some options for those seeking a more up-market service but they are unlikely to entice any genuinely discerning corporate customer. Qantas, however, has an answer to this.

Virgin Australia’s move upmarket is predicated upon the airline’s ability to use its lower cost base to compete with Qantas and price more aggressively than its larger rival. With restructuring at the airline and the substantial investment in new aircraft, branding, IT systems, products, routes and partners, the most important thing for Virgin going forward is maintaining that lower cost base. The partnership with Air New Zealand and the airline’s new fare structure should go some way in achieving this.