Asian airline shares were mixed yesterday (17-Jun-09), with the Indian carriers' shares suffering the largest declines as they moved to raise their fares/surcharges in response to sharply higher jet fuel prices. Jet Airways, Kingfisher and SpiceJet reported share price reductions of 9.1%, 4.8% and 3.2%, respectively. 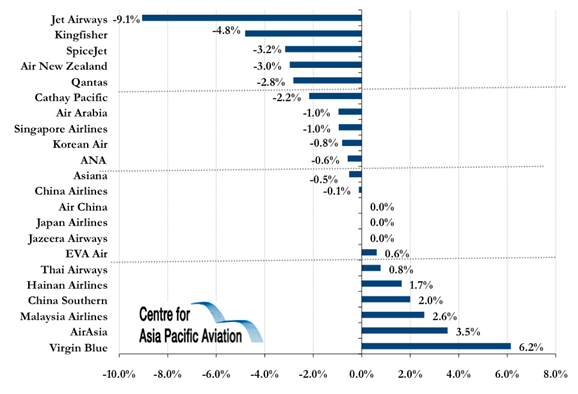 Shares in Qantas and Cathay Pacific eased 2.8% and 2.2%, respectively, while Japan Airlines, which yesterday averted planned strikes by its unions, remained flat.

Air China's shares were also flat yesterday, despite the carrier reporting double-digit year-on-year growth in passenger traffic in May-2009. However, despite the improvement in overall and domestic passenger numbers, international traffic and cargo volumes remain weak, with the carrier admitting that it has "yet to see signs of recovery in the cargo business and volume declines do not yet appear to have bottomed out".