Virgin Australia reported a statutory loss after tax of AUD98.1 million (USD87.8 million) for the financial year to 30-Jun-2013, coming in at the lower end of its surprise profit warning issued on 05-Aug-2013, largely due to a tough competitive domestic environment, a slowing economy and large one-off restructuring and business transformation costs.

During FY2013 Virgin Australia undertook the monumental task of switching to the SabreSonic bookings system, acquired Western Australia regional carrier Skywest to expand its reach into the regional and lucrative fly-in-fly-out contract markets and took a 60% controlling stake in LCC Tigerair Australia providing the group with a dual brand strategy to match the Qantas/Jetstar model.

Virgin Australia CEO John Borghetti stated: “While the financial results clearly did not meet our initial expectations, the 2013 financial year was a pivotal year for Virgin Australia, in which we completed our major restructuring and transformation program and reshaped the competitive landscape of the Australian aviation market, despite a very difficult economic environment and intense competition. We now have the right structure in place to compete vigorously in all key market segments and achieve sustainable performance in the future”.

But Mr Borghetti did not provide guidance on the year ahead, citing the uncertain economic environment.

Virgin Australia grew revenue by 2.6% to AUD4 billion (USD3.6 billion), which was well below the 19.8% growth achieved in FY2011 and reflects the weaker trading conditions in the FY2013 and the impact of waving about AUD25 million (USD22.4 million) of ancillary fees to keep faith with customers during a period of teething issues with the cutover to SabreSonic which resulted in several system outages and led to lost sales.

On the cost side, Virgin Australia incurred AUD105.1 million (USD94 million) in one-off restructuring and transformation costs of which AUD81.5 million (USD72.9 million) was associated with the cutover to SabreSonic. The acquisition and integration of Skywest and 60% of Tigerair Australia along with business transformation initiatives accounted for AUD17.3 million (USD15.5 million) and a further AUD6.3 million (USD5.6 million) resulted from accelerated depreciation on legacy assets.

The statutory result includes an underlying pre-tax trading loss of AUD9.4 million (USD8.4 million) for Skywest, which reflects the cost of integrating the business with the Virgin Australia Group and strengthen its operating platforms to prepare the carrier for rapid growth in the future.

Group yield growth of 11.08% was marginally under the FY2012 performance.

Each of the shareholding carriers will contribute on a pro rata basis according to their current shareholding in Virgin Australia.

For SIA, ANZ and Etihad their equity investments give them access to a greater share of Virgin Australia's financial performances than is available to them through their codeshare alliances alone. The access to Australia’s domestic market that Virgin Australia provides is crucial to all three carriers, particularly SIA and Air New Zealand given their large operations to and from Australia.

Virgin Australia launched a three-year Game Change programme at the beginning of FY2011 to reposition the business for a more stable future and provide a flexible operating platform through strengthening systems and processes including treasury and procurement frameworks, improved operating and financial disciplines and a business efficiency programme. With the major targets achieved a year ahead of schedule in FY2012 the carrier has moved to the Game On phase of its development programme focusing on realising the benefits of the complete overhaul of the business in the previous two years by driving growth through product and service improvements.

The transition from two booking and check in systems under two airline designator codes to the single SabreSonic system was one of the biggest aviation projects undertaken in Australia in the past two decades, according to Mr Borghetti.

The new system was critical to the ability for the carrier to grow and increase its exposure to the corporate and government market as well as travel agents worldwide. Bookings have recovered from the impact of the disruptions following the system change over with domestic bookings made within three weeks of travel up 15% in Jul-2013 compared to Jul-2012 and yields doubling to 20%. 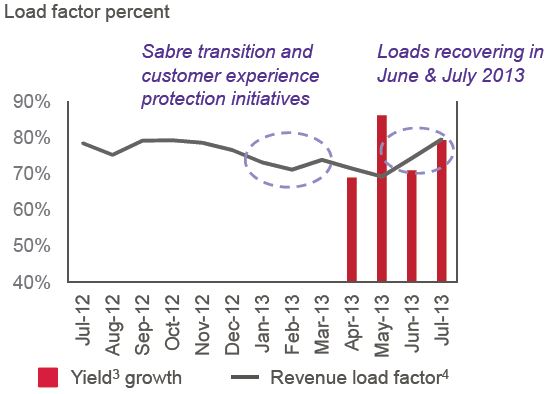 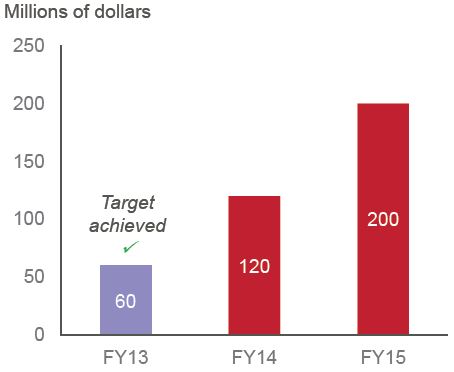 Virgin Australia expects to increase domestic capacity by 3-4%, but Tigerair Australia expansion is still under wraps

Virgin Australia's domestic profits were particularly hard hit by the accelerated transformation programme combined with the effects of a slowing economy and a competitive environment which led to underlying EBIT sliding to a AUD44.4 million (USD39.7 million) loss in FY2013 from a AUD93.2 million (USD83.4 million) profit in FY2012. Total passengers carried were down slightly at 16.7 million on the previous year.

Virgin Australia added 6.3% capacity across its domestic network in FY2013 as it sought to build a sustainable position on the east-west trans-continental routes with the introduction of widebody A330-200s replacing 737-800s, as well as strengthening its position on the golden triangle routes of Sydney, Melbourne and Brisbane, and its regional network.

The carrier expects to increase capacity by between 3% and 4% in the first half of FY2014 which Mr Borghetti says is in line with traditional market growth. But the increase excludes capacity from Tigerair Australia which is in the process of formulating its strategy which will see its fleet grow from 11 A320 to 23 and potentially 35 aircraft by 2018. This is likely to reignite a capacity battle with Jetstar as the dominant LCC moves to protect its position.

Virgin Australia completed the acquisition of 60% of Tigerair Australia in Jul-2013 allowing the carrier to re-enter the key high growth LCC segment of the market, which it exited as the carrier morphed from its own LCC roots as Virgin Blue.

Mr Borghetti said Tigerair Australia’s performance improvement would be driven by increasing the scale of the business by growing the fleet to bring economies of scale and increase cost advantages. In addition, higher yields will be achieved through improving operational and service standards while margins will be improved by extracting synergies through leveraging off shareholders for certain functions such as procurement.

Virgin Australia and Tigerair Australia currently have a combined domestic capacity share of 35.5% against Qantas and Jetstar’s combined 60% according to Innovata.

Virgin Australia’s international profit is down despite revenue growth

A final decision is also expected in the next few weeks from the Australian Competition and Consumer Commission regarding an application by Air New Zealand and Virgin Australia to renew their trans-Tasman alliance. Draft approval was granted in Jul-2013 for a further three years, rather than the five years sought by the alliance, matching the term granted to the rival Qantas-Emirates trans-Tasman alliance in Mar-2013. Virgin Australia and Air New Zealand have also appealed the revised minimum capacity conditions.

Qantas' FFP ranks among the best airline programmes in the world and delivers several hundred million dollars in profit each year - a clear differentiator from Virgin Australia and a comfortable cushion in tough times.

But Virgin Australia’s Velocity Frequent Flyer programme is now on the rise. It has grown to about 3.7 million members as at 30-Jun-2013, up about 500,000 on a year earlier and Mr Borghetti is confident the programme is on track to achieve its target of five million members by the end of FY2015.

Virgin Australia has put in place its domestic strategy, but North Asia is unfinished business

Virgin Australia has put behind it a pivotal year for the carrier in which it transformed the Australian market with the addition of Tigerair Australia and Skywest to the group and the implementation of a new GDS system, all at a time that the market was gripped by intense competition and a slowing economy.

The fast tracked transformation has put in place most of the key fundamentals that will underpin Virgin Australia’s ability to compete in all sectors of the market including corporate, leisure regional and charter.

However, while the international business remained profitable as the benefits of the various alliances began to flow, there is no mention yet of how Virgin Australia will expand its business in the important North Asia market, particularly China which looms a growing white spot in its virtual global network. Partner Singapore Airlines is some comfort in this respect, but is not a complete long term solution.