Virgin Australia's results for the six months to 31-Dec-2014 suggest stability is returning to Australia's small but always dynamic air transport sector: the main airlines are making acceptable returns on their domestic networks while international is under-performing. In Virgin's case, its AUD103.8 million (USD81.3 million) domestic EBIT profit was cut in half by international's AUD49.5 million (USD38.7 million) loss. For the first time in many years, Qantas' international network is profitable while Virgin's is not.

Virgin's domestic profit more than tripled as Qantas and Virgin ended their capacity war; it had produced market growth, but damaged yields. The improving domestic result was in comparison to deterioration at Virgin's smaller international network. Virgin has a substantial virtual network, but only a small international operation of its own, mostly focussed on leisure flights, where competition is stiff  - and ultimately these are not core to Virgin's new corporate, up-market focus. Perhaps an indicator of the challenges Virgin has faced restoring domestic profitability, the airline is only now turning its attention to international. Options include withdrawals or transfer of services to wholly-owned LCC unit Tigerair Australia.

Supporting the improvement in Virgin's results was a marked change in its domestic market, Virgin's core segment, accounting for about 75% of its business. While this segment was previously the one in need of work, the cause had been relatively simple – domestic over-capacity – and the ending of a capacity war has restored stability. But the international market is complex with no quick fix.

The domestic market is where stakeholders Air New Zealand, Etihad and Singapore Airlines have been pressuring for a solution, eyeing the biggest challenges at Virgin. The local market has improved rapidly and Virgin’s performance with it: the domestic segment has increased its profit from AUD25.9 million (USD20.2 million) in 1HFY2014 to AUD103.8 million (USD81.3 million) in 1HFY2015.

Virgin's official figures are skewed as, between 17-Oct-2014 and 31-Dec-2014, capacity from Tigerair Australia (all domestic) is included, showing first half ASK growth of 7.6%. But when excluding Tigerair, capacity grew only 1.0%.

The future course of capacity moderation has become more uncertain now that low fuel prices may provoke Australian airlines to grow faster than previously planned. Qantas was, perhaps for this reason, coy about forward domestic growth figures at its results reporting. If there is to be growth, it is best that it is in populous areas where capacity can be absorbed, and not the limited East-West and Intra-West segments that had previously been the cause of much over-capacity.

Virgin noted a 3.2% reduction in CASK minus fuel and foreign exchange as compared to the prior period, and a reduction of 3.6% when excluding Tigerair Australia and fuel.

The retirement of the two ex-Emirates A330-200s, optimisation of sales channels, fuel consumption initiatives and savings in labour costs contributed to the reduction in costs and CEO John Borghetti Borghetti noted the carrier remains on track to achieve further savings within the business.

No guidance has been provided for the remainder of Virgin’s cost reduction initiatives.

Virgin Australia's international network is not core to its business, and is declining

In comparison to the improving domestic network, international increased its losses by 54.8% to AUD49.5 million (USD38.7 million) compared to a loss of AUD31.9 million (USD24.9 million) in 1HFY2014. This was the second time in recent years Virgin's international network was loss-making in the first-half. Virgin is unprofitable internationally while Qantas has posted profits.

But adjusting for the different sizes of their networks, Qantas has considerable upside for its international network. Likewise Virgin also has room to improve its domestic performance. While its first half domestic profit was one of its biggest, Virgin is much larger now in the domestic market than in past years. 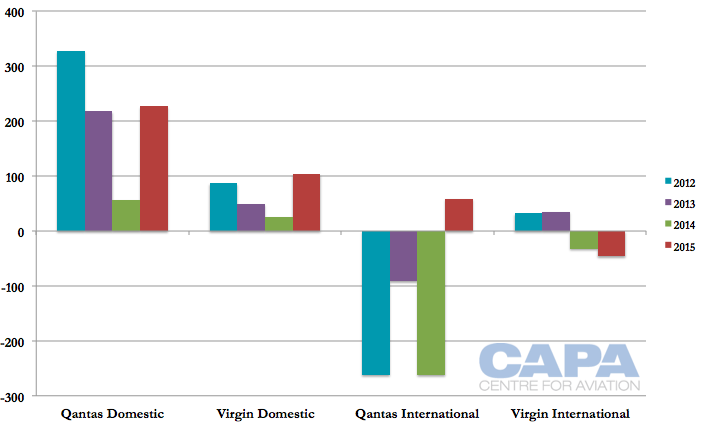 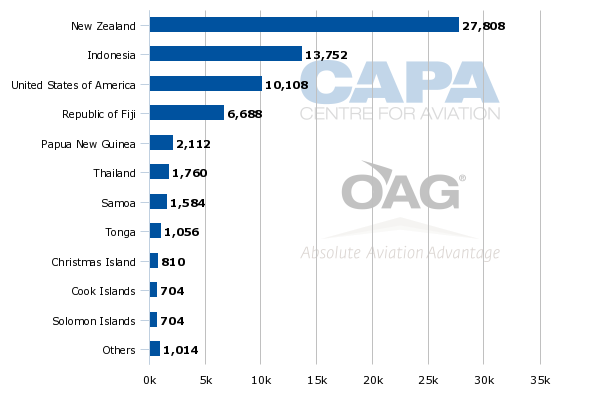 Mr Borghetti noted several initiatives are coming to improve the performance of the international business and pointed to several already under way, including adjusting frequency and timing to Bali, the introduction of business class on Tasman and Pacific Island services and the integration of New Zealand operations with the Australian business.

The challenge is largely stiff competition and overcapacity between Australia and Southeast Asia. While Virgin operates some its 737s on some of the longest stage lengths in the world to get there (requiring blocking several seats westbound in the process), its competitors – including Jetstar and Garuda Indonesia – are operating 787s and A330s at considerably similar price points (if not cheaper).

Mr Borghetti singled the market out quite clearly as the problem child, noting: “The issues are predominantly around Southeast Asia… When you look at Southeast Asia, in particular Indonesia, there is a lot of low-cost capacity there.”

There is the risk of further competition should Indonesia AirAsia X be permitted to serve Australia from its Denpasar (Bali) base, Virgin's only point in Indonesia.

One option, other than suspending services to Southeast Asia, is to transfer them to Virgin's now wholly owned LCC Tigerair Australia - extending the "group" role of the airline's various entities. Tigerair's narrowbodies would however have to compete against other airlines' widebodies. Further, impending service by Indonesia AirAsia X will have cost advantages given its Indonesian, not Australian, base. It is unclear how extensive the synergies Tigerair would be from Virgin's ownership.

At its recent investor briefing, Mr Borghetti conffirmed that Tigerair would eventually be deployed on international routes but did not provide a timeline or potential destinations.

Virgin has flagged additional aircraft types beyond Tigerair’s existing A320 fleet as part of a potential international expansion.

Mr Borghetti has flagged potential destinations in Indonesia, Fiji and New Zealand for Tigerair, noting: "This international licence… is a weapon in our armoury we could choose to use against Jetstar in short-haul travel, just like we do domestically, which means that we bring further competition.”

Widebody aircraft would likely be too big a leap. Different narrowbody aircraft could be an option. Overall, it is a risky proposition and potential payoffs are few. Further, it is not core to Virgin's business and transformation work in those more important areas remains. Clearly this regional international strategy is a work in progress.

For now, Tigerair remains confined to flying within Australia. In the domestic market, Tigerair Australia achieved a profit of AUD0.5 million (USD0.4 million) in 2QFY2015, the first quarterly profit for the carrier since Dec-2010, compared to a loss of AUD46.1 million (USD36.1 million) in FY2014. Tigerair grew its revenue by 18%, around 3% higher than its capacity growth over 1HFY2015 and Mr Borghetti affirmed the airline would be profitable by the end of calendar year 2015/16 – or possibly earlier.

Tigerair CEO Rob Sharp warned there are no plans to dump capacity to trigger a defensive response nor would it risk creating an oversupply situation. An expected A320 delivery in late 2014 was not taken up, and the status of five remaining aircraft on order remains unclear. Singapore’s Tiger Holdings said it would assume responsibility for an undisclosed number of aircraft that were to be delivered to Australia, suggesting they are not likely to be delivered either.

Tigerair’s proposition in relation to Virgin’s overall operation is still in its infancy. A small network adjustment to date has seen the carrier assume some of Virgin’s more leisure focused services and frequencies; the LCC offers multiple options for the future, especially with fuel prices at recent lows. But in Southeast Asia's increasingly competitive market, new initiatives must be carefully calibrated.

Mr Borghetti said the group remains focused on a strong, unrestricted cash balance and “will continue to look for other opportunities to diversify our funding sources, meet our refinancing needs and enhance our liquidity position.”

An inaugural USD300m unsecured note issue in late 2014 was oversubscribed, and marked the airline’s first foray into international debt capital markets. Virgin said the proceeds would be used to provide additional US dollar liquidity coverage and to meet future US dollar financing obligations, and likely to strengthen the balance sheet as it assumes full responsibility of Tigerair’s liabilities – which counted some AUD486.7 million (USD408 million) related to aircraft lease facilities and AUD20 million (USD17.4 million) related to banking facilities in Nov-2014.

Modest fuel gain so far, due to hedges, but more significant gains will come in second half

Virgin noted that while while the effective unit cost for fuel was broadly in line with market rates during 1HFY2015, the group derived a strong hedging benefit in the prior corresponding period. 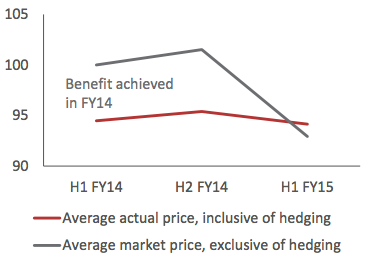 Virgin has hedged 81% of its expected fuel consumption requirements at a worst case option-inclusive rate of AUD110.34 (USD86.43) per barrel. Virgin expects 18% and 25% respective participation from any favourable price movements in foreign currency and fuel prices over 2HFY2015. Mr Borghetti said he prefers a conservative hedging strategy.

Virgin has not stated where future cost savings may come from. Virgin's AUD1 billion is half that of Qantas' AUD2 billion cost saving programme, reflecting the respective airline sizes.

Qantas is much bigger and with more legacy overhangs, so still has more obvious areas for cost savings. Virgin has reduced crewing numbers but its first half results did not indicate employee headcount figures (labour costs were up). In contrast, Qantas' cost reduction programme included the exit of 5,000 employees and fleet changes.

Further cost reductions must be sensitively implemented as Mr Borghetti has sought to portray Virgin as stable, growing and focused on its employees. This was a contrast to Qantas' declines and headcount reductions. Enhancing synergies with Tigerair Australia (although this is a small unit) and integrating Virgin Australia (NZ) with the Australia-based international division also have potential cost saving implications.

Virgin's cost reduction programme comes on the heels of an increased cost base during its transformation. The resultant move up market naturally added cost but the market has been concerned Virgin's yields have not (yet) offset the cost gains. This is downplayed by Virgin management but is now taking on a greater urgency, in part because of pressure from Qantas as the legacy heavyweight reduces its own cost base.

As Qantas becomes more agile, Virgin will be forced increasingly to focus on more cost saving measures, including some (such as with staffing) that would be highly visible. 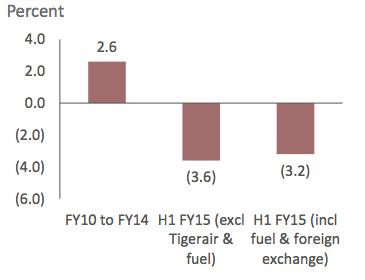 Since launching ‘Game Change’ Virgin has narrowed Qantas' yield premium gap from approximately 40% to the vicinity of 15% to 20% thanks to its increased business focus. Mr Borghetti noted the carrier’s share of government and corporate revenue is now above 25% (Qantas puts the figure closer to 20%). That suggests Virgin's target of 30% is highly achievable over the next two years.

A smaller arm of the group, Virgin Australia Regional Airlines, is developing while Virgin looks to create a freight division, and probably in time given the relative strength Qantas and Air New Zealand are seeing. Virgin expects freight to deliver AUD200 million (USD156.6) in revenue by 2017. Velocity also continues to grow strongly, with a daily join rate of around 2300 members.

The challenge for Virgin is to go back to those healthy parts of the old times: higher levels (on a margin basis) of domestic profitability and a profitable international network. But the old times were far simpler, with no LCC unit to coordinate and no foreign airline shareholders seeking financial and strategic benefits.

Mr Borghetti thrives on change, and now has the opportunity to demonstrate that his airline group can also now thrive.