VINCI chosen as Cape Verde airports concessionaire - beginning of the end, or end of the beginning?

The 10-island archipelago of Cape Verde, in the Atlantic Ocean west of Senegal, is an unusual place. It is one of the most stable countries in Africa and has managed to attract the sort of tourism that most other countries on the continent crave but could never achieve.

Its own air transport business has been in some disarray, however, and added to this is an agreement with Loftleiðir Icelandic (Icelandair Group) not being able to get fully to grips with the national carrier's problems.

Now another foreign organisation, VINCI, has won the contract to operate the (seven) airports, the government having sought a workable privatisation solution for them for some years.

Part one of this two part feature looks at the background and terms of the new deal.

On 04-May-2022 Cape Verde's Government announced by way of Official Bulletin nº 44, Series I, that it had approved the selection of VINCI Airports as the concessionaire for its seven airports and airfields spread across the volcanic Atlantic Ocean archipelago.

These included Praia, serving the capital city; Sal, the long established leisure island airport; Boa Vista, the relatively new kid on the block, an island which primarily handles five-star “all-in” vacationers; and São Pedro, the airport for the country’s main port and commercial city of Mindelo on the island of São Vicente. 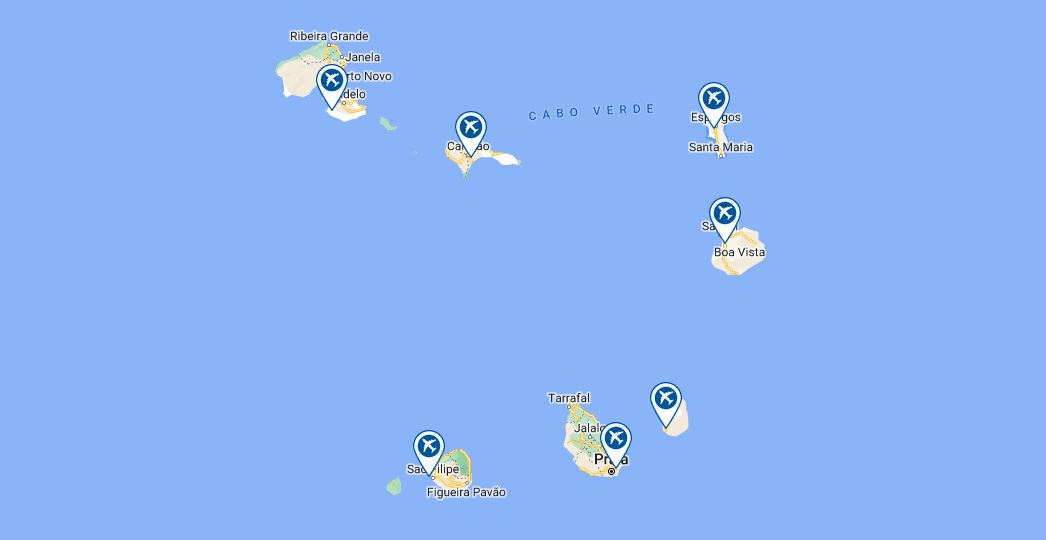 The smaller airports will demand their piece of the action

That’s quite a mixed bag, even for an experienced operator like VINCI, and the magnitude of its task is further revealed when one realises that the smaller airports, those not mentioned above (Maio, São Nicolau and São Filipe on Fogo, an outright volcano), support islands where there is little tourism to speak of and air routes exist only to support meagre local populations, some of them existing at a subsistence level.

One island needs a new airport

Furthermore, there is at least one candidate for a new airport altogether: the island of Santo Antão, the westernmost one and physically the second largest, which has not had any air service since the airport, Agostinho Neto, was closed for safety reasons pursuant to the loss of TACV flight 5002 from nearby São Pedro Airport on São Vicente island in Aug-1999.

At that time there was precious little tourism to Santo Antão and a battered ferry did the job of transporting passengers between those two islands thereafter.

Today, tourism is becoming one of the most dominant industries on the island and especially ‘back to nature’ tourism such as hiking, trekking and cultural tourism; effectively a return to what Cape Verde offered before it was discovered by vacationers whose only objective is to hit the beach during the day and the bars at night.

There are plans to build a new airport near Ponte Sul, west of the main ‘city’ of Porto Novo. Cape Verde is a country which, while religiously calm and politically settled, and immune from the worst ravages of ideologies, is riven by internal economic strife manifested in inter-island jealousies.

The operator was not given the opportunity to cherry pick

VINCI has not been permitted to cherry pick which of the airports it would manage, a prospect that could have left half the airports with the government to get by as best they could, and that means it has to get to grips with airports like São Nicolau’s Preguica Airport, which handled a little more than 20,000 passengers in 2019.

And that is before it squares up to the demands for a new airport on Santo Antão.

VINCI faces one of its biggest challenges

That is why VINCI, the world’s biggest private sector operator, faces one of its biggest challenges in managing Cape Verde’s airports – second only to those in Cambodia.

There in Cambodia VINCI is a consortium partner for the three international airports, but it is where it faced criticism over alleged lack of investment and where it was not invited to bid to build and manage two new greenfield airports – including one for the capital, Phnom Penh.

VINCI is starting with a clean sheet in Cape Verde, and undoubtedly with goodwill in abundance, but the knives will be being sharpened already on each of the islands, none of which have known of anything but state control over their airports.

Furthermore, VINCI has to deal with the Cape Verde government’s determination to define clearly a ‘public service provision’ policy in the air transport sector, prioritising connections between all the islands and connecting the country with its widespread international diaspora, who are to be found mainly in mainland Europe and North America.

Again, VINCI will have experience of public service obligation (PSO) routes and their implementation – for example in the Azores, another set of Atlantic islands that are part of Portugal, which was the colonial power in Cape Verde until independence.

Also, possibly, in France and in the north-western Brazilian states, where it operates small airports.

But this objective of the government will inform VINCI unquestionably that taking on these airports will amount to a great deal more than merely building tourism, as important as that is to Cape Verde.

The air transport sector there – despite the dramatic increase in tourism – has bounced from one crisis to another over the past decade or so as the state airline TACV (now Cabo Verde Airlines) has tried to juggle its many responsibilities on a limited budget: connecting the islands with each other; enhancing access and egress for its citizens at home and abroad for business or leisure purposes; and attracting foreign visitors for business or leisure reasons.

That is why the government lured Icelandair, a company with relevant experience, to take a 50% stake in Cabo Verde Airlines through a local company; one that Icelandair subsequently relinquished, the government buying back the stake.

If Icelandair could not make it work in Cape Verde then VINCI must know there is a long, hard road ahead. 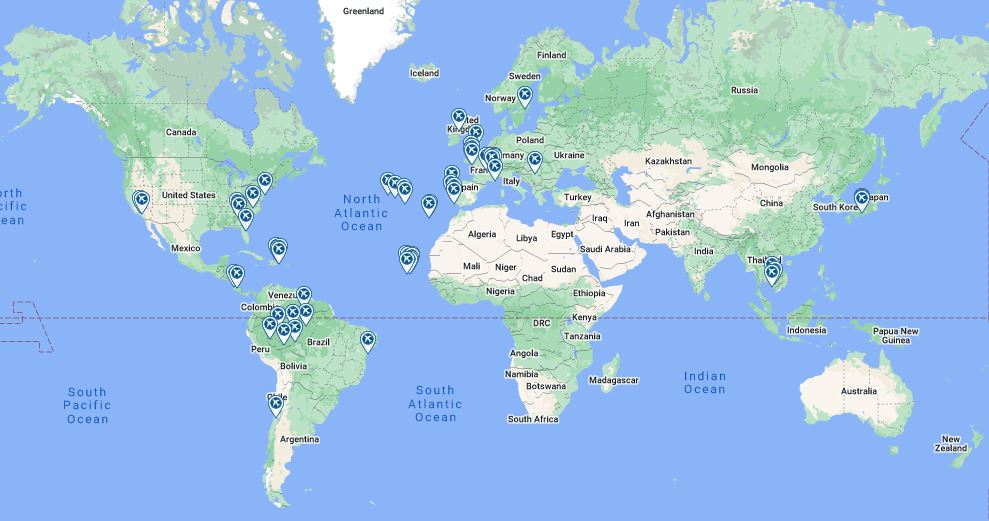 VINCI Airports’ conglomeration of airports in the North Atlantic 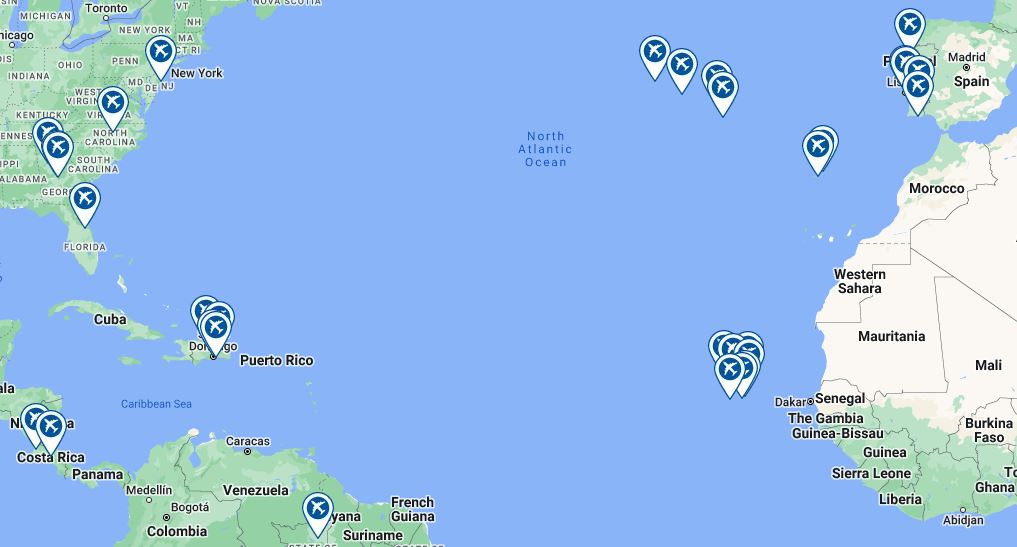 A local company to be established, by law

Under the agreement VINCI will establish a Cape Verdean company governed under Cape Verdean law to finalise the concession agreement. Undeniably a sensible move (and one which VINCI, like Fraport, has done elsewhere); it was an actual requirement of the deal here.

The assets currently allocated to the airport activity of Empresa Nacional de Aeroportos e Segurança Aérea, SA (ASA, S.A.) and necessary for the continuation of the concession are transferred to the concessionaire under the terms established in the concession contract.

The task – modernise the airports; make them competitive; increase tourism

The Government justifies the concession of the public airport to private investors with the aim of “expanding and modernising the Cape Verdean airport network and, at the same time, promoting tourism in the country, reinforcing the competitive position of national airports for the benefit of the national economy and of passengers and users of airport infrastructure”.

Meanwhile the Government will create a multidisciplinary body to monitor the transition of contracts from the existing airport operator and regulator, ASA.

Presumably, the body will be represented by stakeholders from both public and private sectors. The milestone is central to the government's long term aviation sector strategy, which targets the modernisation and expansion of its international airports and had sought privatisation arrangements on several occasions before the outbreak of COVID-19.

CAPA has frequently commented on the prospects for the privatisation of Cape Verde’s airports by way of concession.

In an article in Apr-2019 CAPA reported that the government was then seeking concessionaires for its airports. Presumably that process was simply delayed by the pandemic.

CAPA has also ventured that as for potential concessionaires, they really require specialised knowledge of island operations and/or small remote facilities. It was suggested that VINCI Airports could do it because of its experience with the ANA airports in the Portuguese islands as mentioned previously, but the question was whether it would be interested at this level.

There is a ‘mixed bag’ of airports to deal with, each with its own idiosyncrasies

Some of the conclusions were:

In an article dated 14-Feb-2022 a speech by Cape Verde's Prime Minister, Ulisses Correia e Silva, was examined in which he outlined the government's transport priorities to “unify” the domestic market, which is spread across the 10 islands, and to “connect the country with the rest of the world”.

This is the framework under which VINCI will have to work.

See related CAPA report from Feb-2022: Cape Verde Prime Minister outlines priorities for air transport; some realistic, others not so much

For all the responsibilities VINCI has taken on here, its commercial focus will undeniably be on the airports at Sal, Praia, Mindelo and Boa Vista.

PART TWO of this report will look more closely at each of these airports.