VietJet Air is poised to become the first airline to operate scheduled nonstop flights connecting Vietnam and India. The Vietnamese LCC plans to operate four weekly services initially, from Ho Chi Minh to Delhi, but over the next several years could add several routes to India.

The Vietnam-India market is relatively small but has been growing rapidly. From a small base, traffic has nearly tripled over the past five years and was up 30% in 2017, driven by a 30% increase in Indian visitor numbers to Vietnam.

Vietnam and India are among the 10 most populated countries in Asia and are only four to six hours apart by air. Vietnam is also an increasingly popular tourist destination and India is one of the fastest growing outbound markets. While there is now sufficient demand to support direct services, VietJet will have to overcome stiff competition from sixth freedom competitors, which have the advantage of offering multiple Vietnam-India city pairs.

In Mar-2018 VietJet announced plans to serve India starting with a four times weekly service from Ho Chi Minh to Delhi. VietJet has not yet set a launch date or started selling the service but has secured approvals, and New Delhi has been loaded as a destination into its online reservation system.

VietJet could soon decide on a launch date of late 2018 or early 2019. The delays in deciding on a launch date since the Mar-2018 announcement have likely been partially driven by delivery delays with the A321neo.

Earlier this year Pratt & Whitney engine issues forced VietJet to ground its first A321neo, which it took at the end of 2017, and have resulted in delivery delays for subsequent aircraft. VietJet finally took its second and third A321neo in Aug-2018 and is expected to take five more A321neos by the end of 2018, according to the CAPA Fleet Database. The airline is currently using the A321neo on some of its longest routes (from Vietnam to northern China, Japan and South Korea) and will be able to launch more long narrowbody routes as it takes delivery of additional A321neos.

VietJet has 70 A321neos on order, according to the CAPA Fleet Database. The A321neo is ideal for Ho Chi Minh-Delhi route as the route is more than five hours. The route could be operated with A320ceos or A321ceos, but VietJet may have payload restrictions during certain times of the year.

VietJet’s longest current scheduled route is Ho Chi Minh-Seoul, which is approximately 100km shorter than Ho Chi Minh-Delhi. It is VietJet’s only current route over five hours and is served twice daily with a mix of A321s and A321neos.

However, VietJet is currently operating longer charter routes to Japan (including Hanoi to Sapporo, which is operated with A321neos and is more than five hours). VietJet plans to launch scheduled services to Japan in Nov-2018. 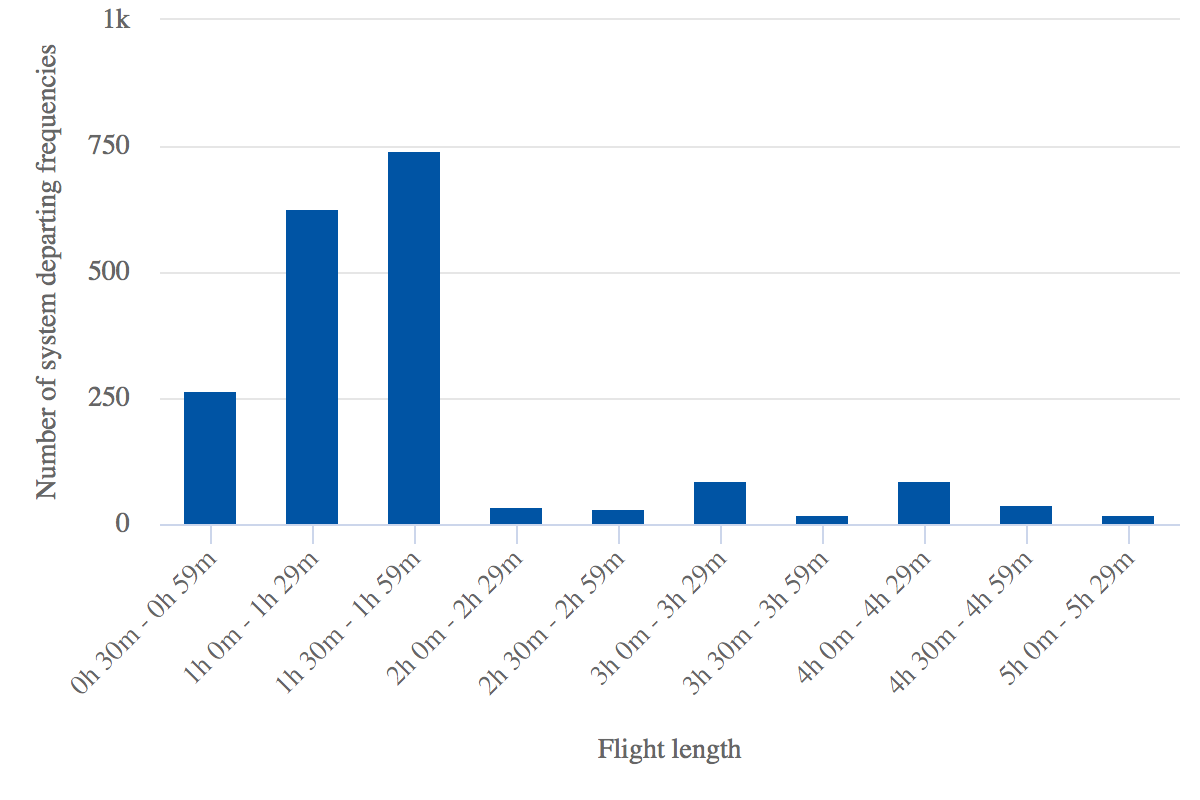 Having announced its commitment to the India market at a Mar-2018 Vietnam-India business forum in Delhi, Vietjet expects to launch other Vietnam-India routes in future.

Hanoi-Delhi is the third largest Vietnam-India city pair, accounting for 12% of Vietnam-India bookings in 2018. Hanoi-Mumbai is fourth largest, accounting for 9% of bookings in 2017. Hanoi-Delhi is approximately 600km shorter than Ho Chi Minh-Delhi, making it very feasible with A320ceos, while Hanoi-Mumbai is only approximately 200km shorter than Ho Chi Minh-Mumbai.

India will be VietJet’s tenth international market with scheduled services and first in South Asia. It currently has scheduled services to Cambodia, Hong Kong, Malaysia, Myanmar, Singapore, South Korea, Taiwan and Thailand as well as charters to mainland China and Japan. As previously mentioned, Japan will become a scheduled market in Nov-2018 when Hanoi-Osaka services are launched. (VietJet also plans to launch services on the longer Ho Chi Minh-Osaka route in Dec-2018 and from Hanoi to Tokyo Narita in Jan-2019.)

VietJet has been pursuing rapid international expansion over the past two years, after focusing mainly on the domestic market in its first four years of operations.

VietJet will be the first airline to operate scheduled nonstop services in the Vietnam-India market. Its rival LCC Jetstar Pacific currently operates a limited low frequency seasonal charter service between Hanoi and Gaya.

The Hanoi-Gaya route is relatively short, less than four hours, as Gaya is located in eastern India. Gaya is a popular religious pilgrimage site for Buddhists and is almost entirely an inbound market.

The Vietnam-India market has grown rapidly, driven mainly by outbound leisure demand from India. Vietnam-India passenger traffic has nearly tripled over the past five years to approximately 200,000 return passengers in 2017, according to AirportIS data. In 2017 the market grew by approximately 30%.

VietJet will need to attract nearly 80,000 Vietnam-India return passengers per annum to sustain an 80% load factor (based on four weekly services using A321s). This would represent less than 30% of the total Vietnam-India market or less, given that the market will likely continue to grow at a rapid rate – particularly since VietJet should be able to stimulate demand. VietJet’s fares are generally very low and the new nonstop product should make Vietnam a more attractive destination for Delhi residents.

However, securing 30% or even 20% market share could be challenging, given that the Vietnam-India market is fragmented and there is no single city pair that accounts for more than 15% of Vietnam-India traffic. Feed on both ends could therefore prove critical.

VietJet will clearly need to rely on connections beyond Ho Chi Minh to make the Ho Chi Minh-Delhi route viable. VietJet has an extensive domestic network in Vietnam, with 17 destinations. The ability to offer connections or stopovers in popular tourist destinations such as Da Nang, Da Lat, Haiphong, Hue, Nha Trang and Phu Quoc should help the airline attract passengers from Delhi.

A partnership with an Indian airline would also help, particularly if VietJet is to increase the Ho Chi Minh-Delhi service to daily. An Indian airline could provide feed from Mumbai, the other main Indian gateway for Vietnam-India traffic, as well as several cities in central and southern India.

Jet Airways already has a partnership with Vietnam Airlines

Jet Airways would be perhaps the most attractive of the full service airlines in India. However, Jet Airways already has a codeshare partnership with Vietnam Airlines. This codeshare seems to be successful, as Jet Airways has been able to maintain a significant share of the Vietnam-India market since dropping one-stop services to Ho Chi Minh in Mar-2016.

The switch in origin points from Delhi to Mumbai was not significant because Jet Airways offered a one-stop product from both Delhi and Mumbai for the entire period of its Ho Chi Minh service. Jet Airways has Delhi-Bangkok and Mumbai-Bangkok services that arrive at Bangkok at similar times. The transit time in Bangkok was one to two hours in both directions in both the Ho Chi Minh-Delhi and Ho Chi Minh-Mumbai markets.

Jet struggled with the one-stop service because the product was no different from competitors, which also offered one-stop products from Ho Chi Minh to Mumbai and Delhi (via Bangkok, Kuala Lumpur and Singapore). Jet had fifth freedom rights to carry local Bangkok-Ho Chi Minh passengers, but this in an extremely competitive and low yielding market. Jet’s low frequency, and the fact that it is not a well-established brand in Southeast Asia, made it hard to attract fifth freedom traffic.

The stop in Bangkok also meant that Jet had a two-stop product from Ho Chi Minh to cities in India other than Delhi and Mumbai. Passengers travelling from Mumbai to Vietnamese cities other than Ho Chi Minh also had two stops – and had to endure a self-connection because at the time Jet did not work with any airlines in Vietnam.

The sixth freedom competitors in the Vietnam-India market have the advantage of offering one-stop products between multiple points in Vietnam and several points in India with generally quick connections at their hub. Jet only provided a one-stop product on two city pairs that only account for less than 30% of total Vietnam-India traffic (although they are the two largest city pairs).

VietJet will have a one-stop product on more than 10 city pairs – and an even higher number if it is able to partner with an Indian domestic airline – along with an exclusive non-stop product on the single largest city pair.

Jet Airways’ decision to suspend the Bangkok-Ho Chi Minh tag and instead rely on a new codeshare with Vietnam Airlines seems to have paid off, as the airline’s share of the Vietnam-India market has only dropped slightly. The codeshare provides quick connections in Bangkok from Hanoi and Ho Chi Minh that are similar to Jet’s previous one-stop online schedule.

Jet Airways accounted for approximately 20% of total Vietnam-India bookings in 2017, according to OAG Traffic Analyser data. Its share of bookings in 2015, the last full year it operated one-stop services to Ho Chi Minh, was only slightly higher, at 25%. Given the overall growth in the market, Jet Airways actually has more bookings in the Vietnam-India market with Vietnam as an offline point than when Vietnam was part of its online network.

Since suspending its Ho Chi Minh service, Jet Airways has been able to maintain the position of second largest competitor in Vietnam-India market after Thai Airways.

Malindo accounted for a 15% share of Vietnam-India bookings in 2017, followed by Singapore Airlines with 11% (or 12% when its regional subsidiary SilkAir is also included), Malaysia Airlines with 10%, and AirAsia with 7%. The AirAsia figure includes services via both Bangkok and Kuala Lumpur.

AirAsia and Scoot are the only current LCC competitors in the market, but Scoot’s market share is very small. VietJet will have an advantage over its LCC rivals in the Ho Chi Minh-Delhi market as it will have an exclusive nonstop product. However, VietJet will not have this advantage in other markets, and will have a relatively limited number of one-stop city pairs unless and until VietJet is able to forge a partnership with an Indian airline.

Competition will be intense, as AirAsia and Scoot are both now focusing more on sixth freedom traffic. Malindo is also an aggressive low fare competitor, despite having a full service product. Thai Airways can also sometimes compete with LCCs on price and will continue to have the advantage of offering the greatest number of destinations in India.

Vietnam-India is obviously an attractive market, given the anticipated rapid inbound growth. VietJet should be able to make a nonstop service work, with low fares stimulating an acceleration of the already rapid growth rate in the number of Delhi residents heading to Vietnam for holidays.

However, VietJet will need to invest in marketing in India, where its brand is unknown, and in distributing through local online travel agencies, which are very strong in India. The India market is never an easy one to penetrate.