Vietnam airports: Can Tho joins international trend with AirAsia

In 2Q2019 Can Tho will become the eighth airport in Vietnam with scheduled international services when AirAsia launches flights from Bangkok and Kuala Lumpur. Other new international services from other airlines will likely follow, including to China, boosting tourism in Can Tho and the Mekong River region of southern Vietnam.

Can Tho is the latest in a growing list of secondary Vietnamese airports to become international. Vietnam currently has seven airports with scheduled international services but six years ago, in early 2013, the country had only three: the main cities of Ho Chi Minh, Hanoi and Da Nang.

Vinh is a large city and provincial capital but does not have significant tourism, which has been the main driver behind the upgrade of several secondary airports to international designation.

Nha Trang and Phu Quoc have emerged as popular beach destinations and Hai Phong is the gateway to Ha Long Bay, a famous UNESCO heritage site and one of the most visited sights in Vietnam. Da Lat is a mountain tourist town that has long been popular for domestic tourists and is starting to gain international notoriety.

While nearly 90% of visitors still enter at the three main airports, secondary airports have accounted for a significant segment of the growth and are likely to grow faster due to the congestion at the main airports. 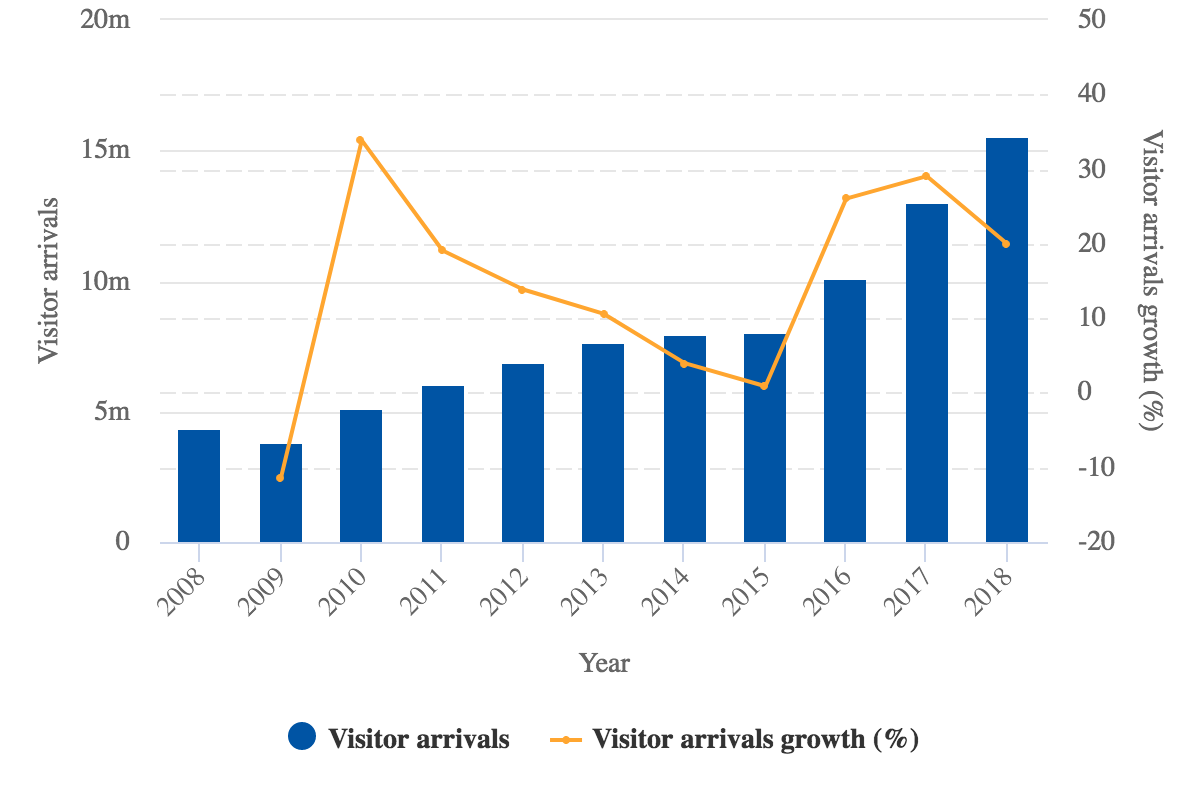 Can Tho starts to promote tourism

Can Tho is the largest city in Vietnam’s Mekong Delta region, an area known for floating markets, pottery villages and picturesque canals. Although the region now has relatively limited tourism infrastructure, the local government has started to work on developing tourism.

Under a new tourism development master plan the Mekong Delta is expected to become one of seven major tourism regions of Vietnam by 2030.

Securing AirAsia is a major breakthrough for the Can Tho government, which has been keen to attract international services as part of its overall tourism strategy. Vietnam’s largest LCC, VietJet, has also been considering the launch of international services and could make a move now that one of its biggest rivals has committed to starting services at Can Tho.

VietJet signed an MOU with the Can Tho government in Aug-2018 to work jointly on expanding its network at Can Tho, including potential international services. VietJet began operating flights at Can Tho in 2015 and now serves Can Tho with up to five flights per day. VietJet’s current winter schedule consists of 16 to 19 weekly frequencies (depending on the week) on the Can Tho-Hanoi route and seven to 14 frequencies on the Can Tho-Da Nang route.

VietJet is the largest airline at Can Tho by seat capacity and currently accounts for a 51% share. Vietnam Airlines is slightly smaller, holding the remaining 49% (based on OAG data for the week commencing 11-Feb-2019).

Jetstar Pacific began competing on the Can Tho-Hanoi route on 28-Jan-2019 but only operated the route during the Vietnamese New Year holiday season (Tet). Jetstar Pacific's last Can Tho flights operated on 10-Feb-2019 but the airline will likely start serving the Can Tho market on a year-round basis in future.

Vietnam Airlines also competes on the core Can Tho-Hanoi route, operating between 14 and 21 weekly flights (depending on the time of year). Vietnam Airlines began competing with VietJet on Can Tho-Da Nang on 1-Dec-2018, when it launched a daily service.

The new services from Vietnam Airlines and Jetstar Pacific have driven up Can Tho’s domestic weekly seat capacity to nearly 13,000 weekly one-way seats, representing a historic high and a nearly 50% year-over-year increase.

Vietnam Airlines also operates regional services from Can Tho to Con Dao (twice daily) and Phu Quoc (once daily) using ATR 72 turboprops; its Da Nang and Hanoi services are operated with A321s. Jetstar Pacific and VietJet only operate A320 family aircraft. There are no services between Can Tho and Ho Chi Minh as the cities are less than 200km apart.

AirAsia to begin serving Can Tho in April

In addition to bringing Malaysian and Thai visitors to the Mekong Delta, AirAsia should be able to attract a significant number of visitors from other ASEAN markets, as well as from India and Australia. AirAsia offers its Fly-Thru transit product at both Bangkok and Kuala Lumpur.

“We foresee the new route not only contributing to the socio-economic development of the city, but providing new opportunities for the people in Mekong Delta to connect with Asean and beyond through our wide network”, AirAsia Malaysia CEO Riad Asmat said in a 30-Jan-2019 statement announcing the Kuala Lumpur-Can Tho route.

“Can Tho should prove an interesting destination for Thai travellers looking for new experiences with its riverside lifestyle and floating market right at the mouth of the Mekong River”, stated Thai AirAsia CEO Santisuk Klongchaiya. “A direct connection from Thailand to Can Tho will make travel much more convenient for both Thai and foreign tourists.”

AirAsia Malaysia is bullish on the Can Tho market as it has already succeeded in launching services to two other secondary markets in Vietnam. The airline began serving Nha Trang in Sep-2017 and Phu Quoc in Nov-2018.

Thai AirAsia has also been pursuing rapid and successful expansion in the Vietnamese market. In Jun-2017 Thai AirAsia launched services to Da Nang, which was its third destination in Vietnam after Ho Chi Minh and Hanoi.

Thai AirAsia has since quickly expanded on the Bangkok Da Nang route, adding a second daily frequency in 2018 and introducing a third daily frequency from Mar-2019. Thai AirAsia also recently unveiled plans to launch four weekly flights from Bangkok to Nha Trang on 1-May-2019. Nha Trang, along with Can Tho, will give Thai AirAsia five destinations in Vietnam

China is Vietnam’s largest source market; Chinese visitor numbers to Vietnam increased by 24% in 2018, to 5 million.

Japan is Vietnam’s third largest source market but is much smaller (and more mature), with 827,000 visitors in 2018.

Vietnam top source markets based on percentage of visitors: 2018 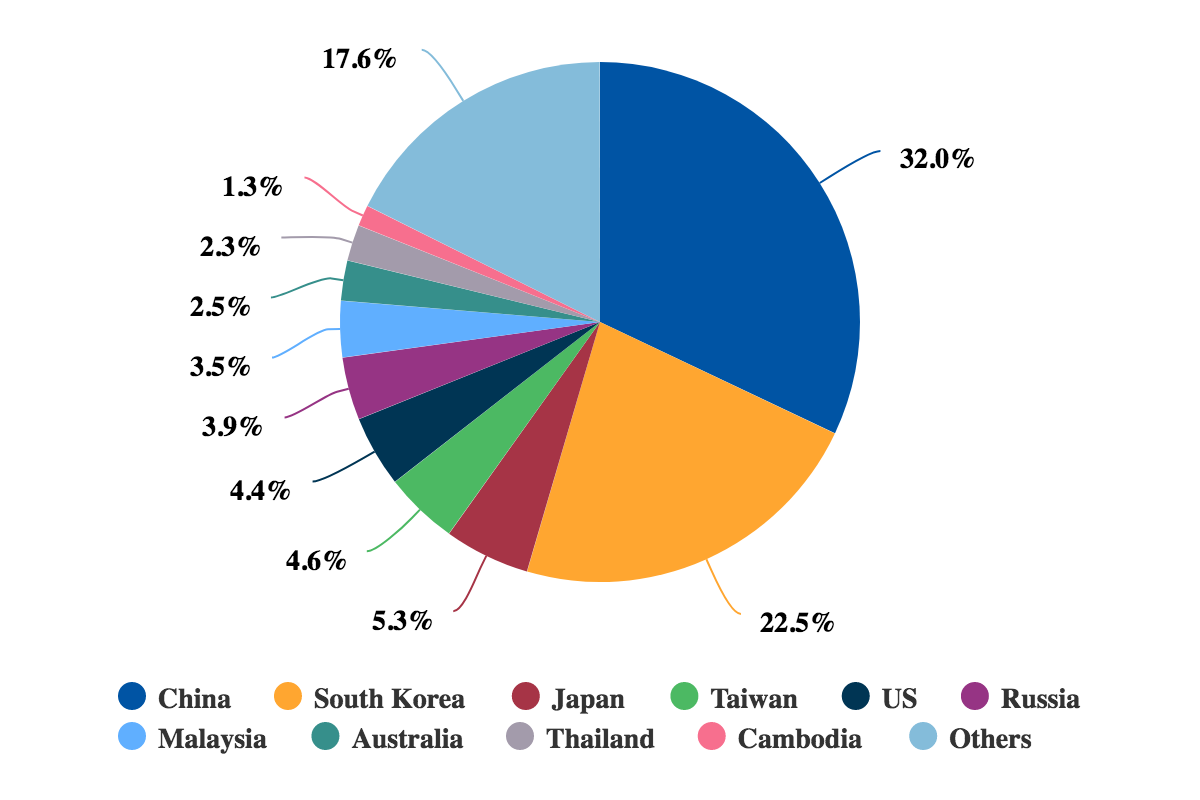 While links to Bangkok and Kuala Lumpur are important due to the connectivity these hubs provide, Can Tho is obviously keen on links with China and South Korea, given that these are much larger (and faster growing) source markets. Most of the other secondary international airports in Vietnam already have services from China and South Korea.

Nha Trang has particularly become a hot spot for Chinese and Korean visitors. The destination currently has services from nine Chinese airlines and three Korean carriers. Jetstar Pacific, VietJet and Vietnam Airlines also operate from Nha Trang to China and South Korea, although most of the China services are charters.

The Phu Quoc-China market is served by five Chinese airlines as well as Jetstar Pacific and Vietnam Airlines (again mainly charters). VietJet launched services from Phu Quoc to Seoul in Dec-2018 and Korea’s Eastar Jet is entering the market on 15-Feb-2019.

Hai Phong is currently served by China’s Donghai Airlines and has a link to Seoul from VietJet. Da Lat’s only scheduled service is currently to Bangkok (operated by VietJet), but Da Lat has frequent charters from China.

Da Lat and Hai Phong are not yet served by AirAsia. Both destinations are likely on AirAsia’s target list as it continues to pursue expansion in Vietnam.

Vietnam is also planning to open several new international airports over the next few years – a combination of new greenfield projects and upgrades of existing domestic airports.

There are six airports in Vietnam that are now larger than Can Tho but do not have scheduled international services – Hue, Vinh, Thanh Hoa, Qui Nhon, and Chu Lai. Vinh, as highlighted earlier in this report, already has international designation.

Can Tho is the 13th largest Vietnamese airport (based on current seat capacity), giving hope for some of Vietnam's smaller airports that they too can become international.

There will be ample opportunities at Vietnam’s secondary airports to attract international services as Vietnam’s tourism industry continues to grow rapidly and as infrastructure constraints at the primary airports (particularly Ho Chi Minh) intensify.