Vietnam’s aviation market has expanded rapidly over the past six years, with passenger numbers more than doubling since 2011. However, Vietnam’s widebody fleet has barely grown, whereas the narrowbody fleet has nearly tripled.

Widebody aircraft currently account for only 16% of the total airline fleet in Vietnam, compared to 26% at the end of 2010. Widebody growth should accelerate significantly over the next few years, driven by expansion at Vietnam Airlines and a new long haul low cost operation from VietJet Air.

Vietnam’s widebody fleet has grown by only five aircraft, or 24%, since the end of 2011. The narrowbody fleet nearly tripled in size over the same period.

Over half of the narrowbody fleet is now operated by Vietnam’s two LCCs, VietJet Air and Jetstar Pacific. Jetstar Pacific and particularly VietJet, which launched operations at the end of 2011, have accounted for most of the fleet growth in Vietnam this decade, although Vietnam Airlines has also expanded rapidly.

VietJet has been planning the acquisition of widebody aircraft for more than four years, conducting multiple studies. It had initially intended to make a decision in 2014 and begin long haul operations as early as 2015.

VietJet has since shelved plans to launch long haul operations several times, deciding instead to focus on the domestic and regional international markets. Postponing the acquisition of widebody aircraft was sensible, given the ample and much less risky opportunities for expanding closer to home.  VietJet focused mainly on the domestic market in its first five years and has only begun to pursue significant regional international expansion over the past 18 months.

The improved range of the A321neo, which the airline began taking in late 2017, opens up opportunities for longer narrowbody routes to markets such as Japan and Russia. However, VietJet still intends eventually to launch long haul widebody operations.

In recent months the airline’s executive team have once again talked about acquiring widebody aircraft, stating that the company has aspirations to serve the US and Australia. In Mar-2018 VietJet unveiled plans to launch nonstop services from Ho Chi Minh to Brisbane in 2019, although it did not provide a specific launch date or indicate which aircraft type would be used for the new eight-hour route.

VietJet has again been evaluating the A350, 787 and A330neo. It has indicated a widebody aircraft selection and acquisition will be pursued this year, which could enable the launch of services to Australia and potentially the US by the end of 2019. VietJet will clearly expand into widebody operations at some point, although it is hard to say for certain if this will occur next year, given the multiple delays in its long haul project so far and the fact that it has previously announced commitments to new international routes without following up and launching the route. (For example, in Sep-2014 VietJet announced plans to serve Russia starting with Vladivostok, but has still not launched the route.)

VietJet could potentially place a widebody order after the FAA upgrades Vietnam to Category 1, which is expected within the next couple of months and is necessary before any Vietnamese airline launches services to the US.

Vietnam Airlines has also talked about launching services to the US once the Civil Aviation Administration of Vietnam secures a Category 1 rating.

Vietnam Airlines has had aspirations to launch services to the US for over a decade and has long been keen to expand in Europe. However, the airline has been focused almost entirely on regional growth over the past several years. Long haul growth has been relatively limited and generally not profitable, while regional growth has been profitable due to surging demand, despite intensifying LCC competition. 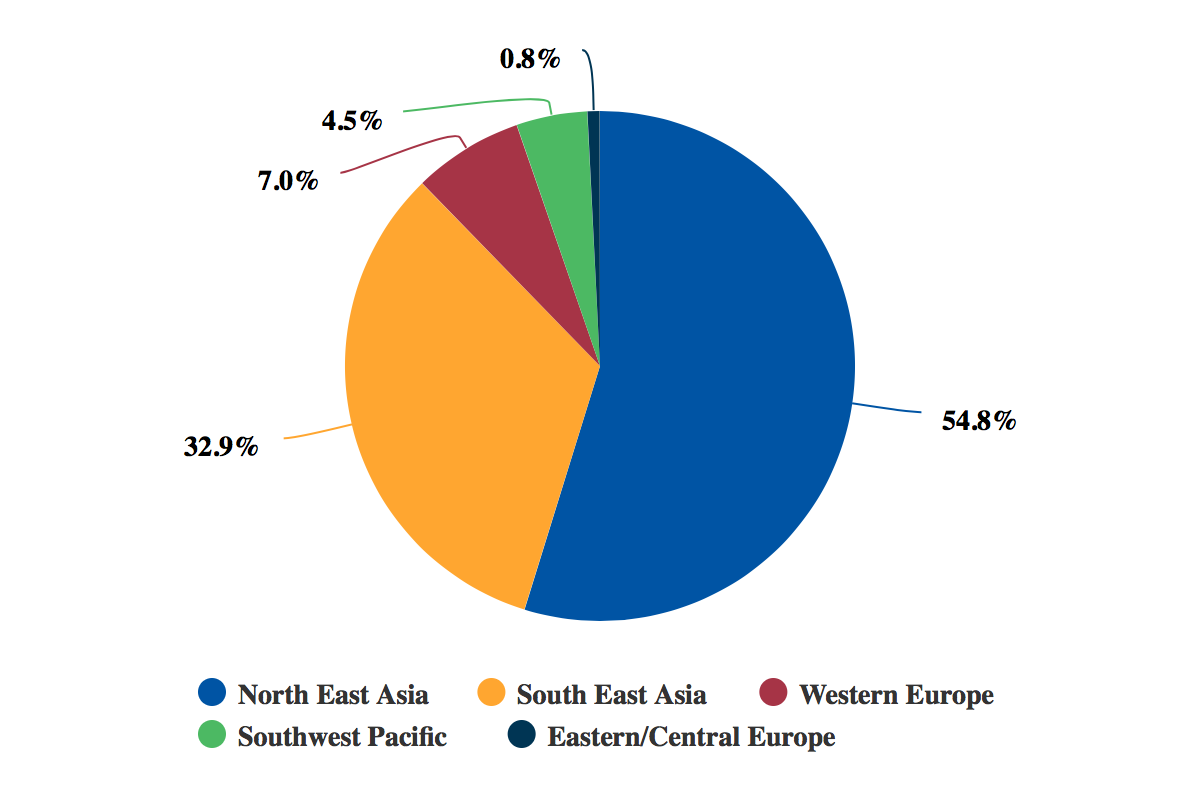 Widebody aircraft are also used on several of its flights domestically between Ho Chi Minh and Hanoi, which is the world’s sixth largest route. Regional international routes within Southeast Asia, which currently generate 36,000 weekly one-way seats, are operated entirely with A321 narrowbody aircraft.

The growth in 2015 all took place in the second half of the year as the first nine new-generation widebody aircraft were put into service in 2H2015. Vietnam Airlines took delivery of its A350-900 in late Jun-2015 and its first 787-9 in late Jul-2015. Taking two new types in just one month was a major milestone for Vietnam Airlines and was accompanied by the introduction of a new corporate identity, website and long haul product.

Vietnam Airlines plans to phase out A330 fleet in 2019

Vietnam Airlines plans to return the last two A330-200s, which are now six years old, in 2019 as their leases expire. Vietnam Airlines took delivery these aircraft from Air Lease in 4Q2011.

Vietnam Airlines to grow regionally with 787-10s and A321neos

The 787-10s are slated to be delivered from 2019 to 2021 and will be used primarily for growth (as only the last two A330s will need to be replaced by the time the first 787-10 is delivered). However, Vietnam Airlines is not intending to launch new routes with 787-10s but instead to use the aircraft to upgauge existing routes to Australia and North Asia.

Vietnam Airlines already uses 787-9s on several routes to Australia and North Asia. Some of these routes will be upgauged to 787-10s, maximising slots at congested airports and resulting in lower unit costs. This will, in turn, free up 787-9s and A350-900 for long haul growth and for the upgauging of regional routes now operated with A321s.

Vietnam Airlines is also planning to expand its A321 fleet as new A321neos are delivered, driving further growth in the regional international market. The current fleet plan has 20 A321neos set aside for growth. Vietnam Airlines has the flexibility to return or sell some of its A321ceos and although this is not part of the current plan it could be pursued, depending on market conditions.

Vietnam Airlines is slated to take its first A321neo in 2H2018. The airline initially planned to take 10 A321neos in 2018 and another 10 aircraft in 2019, but it now expects to receive fewer aircraft in 2018 due to engine-related delays.

The current fleet plan envisages the narrowbody fleet expanding by 20 aircraft over the next three years while the widebody fleet expands by seven aircraft, or 27% (two more A350-900 deliveries and eight 787-10 deliveries partially offset by the return of the last three A330-200s.)

Although 27% growth in three years represents an acceleration, it should be manageable, particularly given the opportunities to upgauge regional routes.

Vietnam Airlines has been evaluating new-generation widebody aircraft which could be used to operate nonstop services to the US. However, acquiring more widebody aircraft is not a priority at this point as its current widebody commitments seem sufficient.

Vietnam Airlines signed an MoU with Airbus in Sep-2016 for 10 additional higher gross weight variants of the A350-900. At the time, Airbus announced that the new aircraft would be used to launch nonstop services to the US in 2020, starting with the Ho Chi Minh-Los Angeles route.

However, Vietnam Airlines never intended to convert this MoU to a firm order. The MoU was politically driven and the airline did not have a requirement for these aircraft (and still does not have such a requirement). The deal was quickly drawn up while French president Francois Hollande was visiting the Vietnamese president Tran Dai Quang.

Vietnam Airlines would prefer not to launch US flights

Vietnam Airlines continues to face political pressure to launch US flights. The airline is now considering the launch of one-stop flights to the US via North Asia, which can be pursued by using the existing widebody fleet. Nonstop flights, which would require new aircraft, are not part of the current plan.

Vietnam Airlines recognises nonstop flights would be highly unprofitable because of the high cost of ultra long haul operations and the low average yields in the Vietnam-US market.

The Vietnam-US market is large enough to support direct flights. However, it is an intensely competitive market, with one-stop fares often less than USD1000. The market consists almost entirely of price sensitive economy passengers – there is limited business or premium traffic – making it hard to charge a premium for nonstop.

The current one-stop plan for serving the US market is to appease stakeholders. However, the airline does not expect one-stop flights to the US to be profitable, and would prefer not to enter the trans-Pacific market entirely.

Significant expansion in Europe is also unlikely until there is an improvement in profitability. The Vietnam-Europe market has been impacted by rapid expansion by Gulf airlines in Vietnam. Vietnam Airlines is hoping a new joint venture with Air France will improve its position in the Vietnam-Europe market, but is taking a wait and see approach before adding capacity on the joint route to Paris.

VietJet could be a better solution for the US market

Vietnam Airlines is better off continuing to focus on expansion within Asia Pacific as it expands its widebody fleet. There is ample demand regionally to support a larger widebody fleet without risking the airline's overall profitability.

The more ambitious VietJet could end up launching services to the US before Vietnam Airlines. A VietJet widebody order and launch of US flights would reduce the pressure on Vietnam Airlines to serve the US market. The Vietnam-US market is potentially more suitable for an LCC, given the price sensitive nature of the market, although the long length of flight and intense competition also makes this a challenging proposition.

Ultimately, at least one Vietnamese airline will take the plunge and serve the US. While profitability will be very difficult to achieve, filling up several widebody aircraft with Vietnam-US passenger will not be difficult.

Vietnam’s overall widebody fleet could double in size over the next five to seven years, in the expectation of new long haul routes launched to the US along with the upgauging opportunities regionally.