'Vanilla Air' new name for AirAsia Japan under ANA's control – will it be sweet or plain vanilla?

Vanilla Air will become the new name of AirAsia Japan from 01-Nov-2013. The re-branding exercise follows the Jun-2013 dissolution of the joint-venture between AirAsia and All Nippon Airways that established AirAsia Japan, which commenced flying on 01-Aug-2012. ANA has taken over AirAsia's 49% stake to have complete control and will guide Vanilla Air with 100% management control on its re-launch, ANA's first time establishing a LCC by itself. AirAsia Japan will pause operations at the end of Oct-2013 and resume flying in late Dec-2013 under a new reservation system and with a new fleet of A320s; AirAsia Japan's fleet will be returned to AirAsia.

Vanilla Air plans to have 10 A320s in 2015, making it smaller than Jetstar Japan or Peach. Its domestic and international route network will be similar to AirAsia Japan's but include the leisure beach markets of Guam and Saipan. Vanilla Air will take up AirAsia Japan's Tokyo Narita base, maintaining a split as ANA's partially-owned LCC Peach is based at Osaka Kansai. Full network details will be released in Sep-2013 with sales to commence in Nov-2013 for a late Dec-2013 launch. Before then, ANA has its work cut out to almost create a carrier from scratch as it gets cut off from the AirAsia systems it had been riding on.

Vanilla Air branding aims to be neutral and appealing

ANA on 20-Aug-2013 unveiled the Vanilla Air branding. President Tomonori Ishii explained the branding, saying: "The simple and sophisticated flavour of vanilla is popular among people worldwide. Besides, the aroma makes people relaxed and satisfied." Mr Ishii added: "We chose vanilla as our brand name because it is popular and loved by everyone in the world."

The theme of food (as exhibited in Peach Aviation) and scents could be explained by Peach finding that it is wives and mothers who typically book holiday tickets. While the majority of air travellers in Japan are male, Peach has found its majority are female.

ANA says the blue and yellow design of Vanilla Air's logo is inspired by a vanilla flower, with yellow petals opening up to symbolise the connection of the airline's routes with the world – and could also suggest a connection to beach markets, which Vanilla Air plans to target with services to Guam and Saipan. Likewise, ANA says "Vanilla Air" is written in sea blue, further strengthening the leisure connection.

The approach comes off as conservative, risk-averse and plain. This is certainly not "Scoot", but in the context of playful Japan where food is especially appreciated – and vanilla, like peaches, is not cheap – and the established aviation order is old school, this branding could very well work.

The airline concept, as previously released, was to "Make leisure time valuable time".

This is perhaps a direct rebuke of AirAsia Japan's shortcomings with time that it became known for: longer check-in time requirements than competitors' as well as on time performance that may be acceptable to a foreign LCC but not Japan's super-efficient and full-service carriers that have high performance rates (but often low utilisation).

Vanilla Air to operate 10 A320s in 2015, putting it behind Jetstar Japan and Peach

The re-branding follows ANA's decision to keep a Tokyo-based LCC flying after AirAsia Japan winds down. ANA in Jul-2013 announced preliminary details, such as the appointment of Mr Ishii and general route, network and market target.

This will still place it considerably behind Peach, currently with 10 A320s and 7 on order, and Jetstar Japan, with 13 A320s. AirAsia Japan is the smallest LCC. 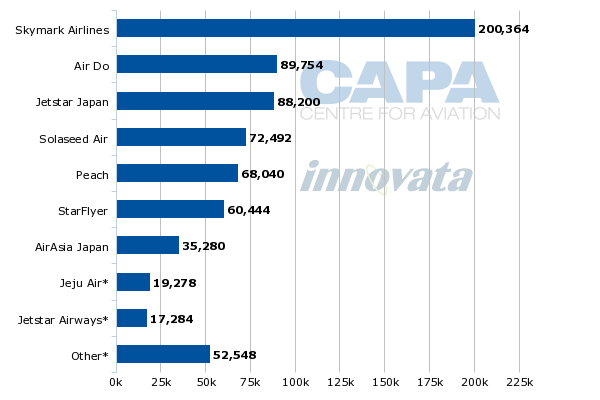 Details of service to Okinawa are still forthcoming (Vanilla Air in late Sep-2013 will announce route network with ticket sales to commence in early Nov-2013) but interesting to watch given Peach's planned expansion there, including using Okinawa as an international hub. ANA is unlikely to want to see its two LCCs directly compete.

ANA has only a minority stake in Peach, which does not fly to Tokyo. AirAsia Japan has not served Osaka, thus avoiding competition (although Peach says it is not interested in Tokyo, irrespective of which airlines are or are not there). 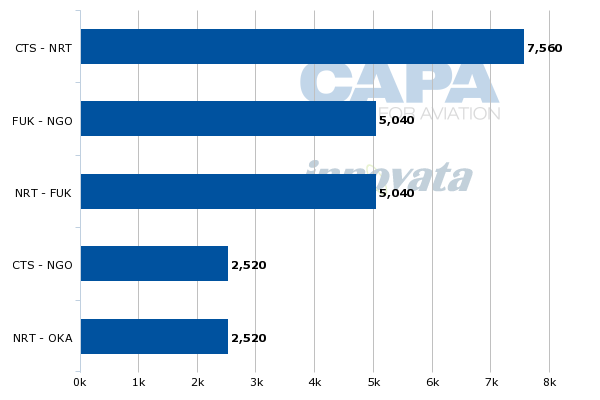 Vanilla Air's international strategy will have similarities to AirAsia Japan: regional Asian points in Korea and Taiwan will be targeted. Korea's Busan and Seoul as well as Taiwan's Taipei are the sole international points for AirAsia Japan.

This is less than Peach, which also serves Hong Kong, but more than Jetstar Japan, which has a strategy of focusing on the domestic market first; Jetstar Japan has yet to launch international services. 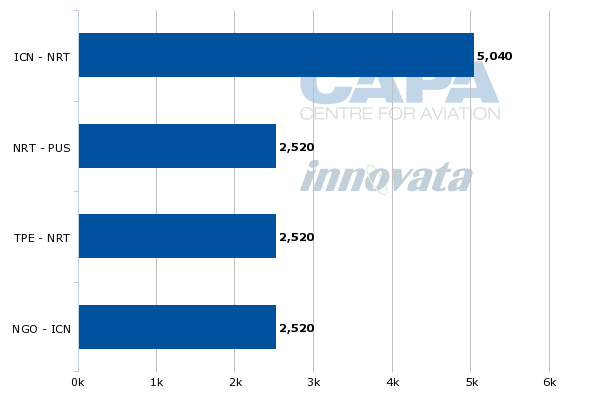 There will be differences in international strategy. ANA identifies AirAsia Japan as having focused on young people while Vanilla Air will increase its focus on families, couples, retirees and groups – segments that have done well for Peach.

Vanilla Air also plans to serve leisure beach markets like Guam and Saipan. Almost entirely leisure destinations, it is not clear yet if ANA will continue to operate alongside Vanilla Air or hand the routes over. Indeed, the proposed level of cooperation between ANA and Vanilla Air has not yet been made clear. There has been no cooperation from AirAsia Japan or Peach with ANA whereas Jetstar Japan and JAL coordinate routes, with JAL even codesharing on Jetstar Japan.

And whereas AirAsia Japan at the time of its launch planned a large presence in China, this was put on the back-burner following territorial and diplomatic disputes in 2012 that saw traffic plummet. China-Japan traffic is still recovering and so far Vanilla Air has not indicated a focus towards this market, but undoubtedly with time it is undoubtedly a huge opportunity.

The majority of Vanilla Air's capacity is expected to be in international markets, following the direction of Peach. A larger international network means a greater pool of potential passengers as Japan's population shrinks, while simultaneously limiting the LCC in the domestic market helps protect ANA's domestic business, which is more profitable than international.

A Japanese LCC stacks up better to regional Asian carriers that naturally have a lower cost base; a full-service Japanese carrier cannot stand up as well against a foreign carrier. In CAPA's recent ranking of Asian airline costs, the three most expensive carriers were Japanese: ANA, JAL and StarFlyer.

Time is limited to launch an effectively new LCC, let alone one that is sustainable

Cooperation is one of many strategic matters ANA will need to address in an extremely short period of time, and its experience in the LCC segment is still young, further adding to challenges of creating an effectively new airline.

This pause will allow ANA to transition the operation, which will require, amongst other things, its own reservation system. A new culture will need to be established while strategy will have to be re-defined. A re-launch could attract greater publicity than the weak attention that resulted from cost-minded AirAsia being in charge of AirAsia Japan's launch.

Timeouts can have silver linings in allowing an operation to take stock rather than be encumbered with the daily demands of running an active airline; Tigerair Australia discovered this during its forced Jul-2011 grounding. The suspension comes during a relatively light period of travel.

Will the re-launched Narita LCC be third time lucky for ANA?

That is not to say Peach has not been a success, but it is weighed down by some legacy ANA practices an external team could not persuade their ANA counterparts to give up. ANA has been candid in saying that it has learned from LCCs and still has more learning to do, just as foreign companies do of Japan.

To go from the backseat to taking the reins, even with consultants, on a project to be completed in an incredibly short period of time, is too far a leap. But just like ANA's initial reason to participate in AirAsia Japan, there may be no better alternative.

A longer absence from the Tokyo market would be handing it on a silver platter to Jetstar Japan, partially owned by ANA rival Japan Airlines. A re-entry could be difficult. After seeing the AirAsia Group make what ANA views as critical mistakes, ANA undoubtedly feels empowered that it knows what to do. It may in some areas, but not in all.

But few airlines get it right from day one and a key feature of the low cost model is to be fleet-footed and adaptable. The test of this will be in whether ANA's born-again LCC makes fewer mistakes this time around.

See related report: ANA to re-launch AirAsia Japan with new brand, oversight – can ANA get it right this time around?

Japanese LCCs are finding success in conservative, not brash, approach

Within months of their launch, AirAsia Japan and Jetstar Japan found the Japanese market more challenging than expected, and they already knew Japan was not going to be a Malaysia or Singapore.

Entrenched inefficiencies, often unique to quirky Japan, remain: boarding cannot occur during refuelling on a Japanese aircraft, Peach requires engineers – not cabin crew – to open aircraft doors, and airlines are limited to the number of days they can have a sale. These are procedures well out of line with international standards, and are generally only to be found in Japan. Market take-up has also been slower, with all of these factors combining to create a higher cost that in turn limits fares and how quickly the airlines could expand.

Peach initially seemed the under-achiever, but as Jetstar Japan halted growth (due to not following its own procedures) and AirAsia Japan's performance plummeted, Peach's conservative approach has seen it hold steady. ANA has clearly detected this as it sets a modest 10 aircraft in 2015 goal for Vanilla Air. Even if it is later revised upwards, Vanilla Air will still likely be smaller than Peach and Jetstar Japan.

Focus on beach markets like Guam and Saipan may not be the blue-chip international destinations AirAsia Japan, Jetstar Japan and Peach spoke of or targeted, but they are almost entirely leisure and suitable for a LCC, while being less likely to impact negatively on ANA.

But there is a risk in being too conservative. Vanilla's president Mr Ishii appears to have a different mindset from most ANA managers, but he still has not had LCC experience. The same is true at Peach, but there they were guided by consultants with a wealth of LCC experience. Conservatism can also mean not cutting costs enough – and ANA already has the highest CASK of a major Asian airline; efficiency is simply not in its DNA.

If ANA really has learned from its experience at Peach and AirAsia Japan and is ready to make bold moves, Vanilla Air may prove to be sweet smelling and satisfying. But too much conservatism could see it be plain vanilla.