All Nippon Airways is going back to its roots. Japan's second airline commenced international scheduled service in Mar-1986 with a service to Guam, one of the Pacific Islands that attracts Japanese tourists. ANA's international launch was hard fought against the then mighty Japan Airlines, and ANA has since focused on blue-chip premium routes. In doing so, it has placed less focus on the beach/resort markets such as Guam, Hawaii and Palau. Despite JAL's shrinkage – it is now smaller than ANA – JAL remains the largest in these beach markets.

ANA is considering how its wholly owned LCC Vanilla Air could expand there and give ANA a larger group presence, Vanilla Air president Tomonori Ishii said at CAPA's recent Asian Aviation Summit in Singapore. JAL has similarly used its LCC, Jetstar Japan, to give it a larger group presence in markets ANA was traditionally stronger in, such as Nagoya and onsen destinations in the south. Vanilla Air will need widebodies to reach these leisure markets non-stop from Japan, and this is a development under consideration. It would be a leap for Japan's still relatively young LCC sector, but ANA faces the larger task of perhaps integrating its two LCCs, Vanilla and Peach.

Vanilla Air could give ANA a presence in under-served leisure markets. But widebodies are needed

Vanilla Air from 2016 to 2018 will be in growth mode, doubling its fleet from its existing eight A320s to over 16 A320s. Vanilla has only two international markets: Hong Kong and Taiwan (it previously dropped Seoul). It is planning high frequency (four daily to Taipei and two to Hong Kong) but needs to source new markets.

Vanilla is focused on growing the international market rather than domestic. There are several reasons. International flights can boost aircraft utilisation, something that challenges Vanilla given the curfew at its home of Tokyo Narita. Domestic traffic is seasonal and relies on local Japanese customers, who have been pampered by full service ANA and JAL and are still warming up to LCCs.

Over 70% of Vanilla's international passengers are foreigners. For other potential markets, China is the huge opportunity but with significant challenges. Southeast Asia is appealing, especially given the surge in inbound visitors as Japan loosens visa restrictions, but is out of Vanilla's A320 range from Tokyo.

There was speculation that ANA, as part of its proposal to invest in Skymark, would take Skymark's A330s and re-deploy them with Vanilla Air to international markets. ANA successfully held off Skymark's creditors, including Airbus – although it remains to be seen what is in the deal for Airbus. In choosing ANA's restructuring plan for Skymark, Airbus passed over the plans of other airlines, including Delta, who are far larger Airbus customers and were not happy with Airbus for choosing to back ANA.

Although Skymark's A330s were initially deployed in the domestic market, the carrier planned to send them later to international markets, including Hawaii. This could have crystallised thinking at ANA for a way to access new markets on a carrier with a lower cost base. (Skymark's A330s are finding new homes, such as with Air Europa, meaning ANA/Vanilla would need to source widebodies elsewhere.)

Historically the Japanese carriers have used lower cost, but still full service, units such as ANA's Air Japan and JAL's JALways, to access leisure markets. But with Japanese airlines' still-high cost bases, and with growing competition, there is a need for further cost reductions.

CAPA has previously noted the emergence of a possible dual brand strategy between ANA and Vanilla Air, including Vanilla Air's strategy options for further international growth:

The second option is to acquire widebody, long haul aircraft, which has been mooted for some time at Vanilla. This would bring more of Southeast Asia (and beyond) into reach and be well beyond the markets that could be accessed from a southern base such as Okinawa. Widebodies would also enable non-stop flights to and from Tokyo whereas an Okinawa base would require transfers to other Japanese points. Much is said of the low cost, long haul model. It is growing in Southeast Asia but in Northeast Asia has only one follower, Jin Air.

A potential long haul operation at Vanilla Air could differentiate it from other LCCs. The Japanese outbound market would prefer a Japanese operator, likely giving Vanilla Air volumes even if it would not be the most cost disciplined. Guam and Saipan have been mooted leisure destinations for Vanilla, but it could also consider Hawaii, which is not in narrowbody range, unlike Guam and Saipan. This strategy however risks ignoring the growing inbound market to Japan, a segment long haul LCCs like the AirAsia X and Scoot franchises are picking up. Competition there would be tough for Vanilla Air.

The attraction of service to Southeast Asia is that foreign passengers are likely to be more receptive to Vanilla's low cost positioning, especially on longer flights. Many segments of the Japanese population are reluctant to travel on LCCs for even short domestic flights due to (usually misplaced) concerns over service and safety. Their demands for on-time performance are strong; ANA and JAL have some of the world's strongest on-time performances, although these are made possible only by low aircraft utilisation. Vanilla Air referred to one quarter's 84% OTP – solid in any other market – as "not good".

Hawaii is the biggest beach/resort market

The beach markets of ANA and JAL comprise Guam, Palau and Hawaii. These are outbound Japan markets. Hawaii is the largest by far, and JAL has 2.5 times ANA's seat capacity in 2015, although 2016 will see a revision to the figure as ANA in northern summer 2015 increased capacity. Guam is less than one fifth the size of Hawaii for JAL, and ANA does not serve it.

Palau receives limited schedule charters from JAL and none from ANA. JAL used to serve Saipan but ended all service in 2005. 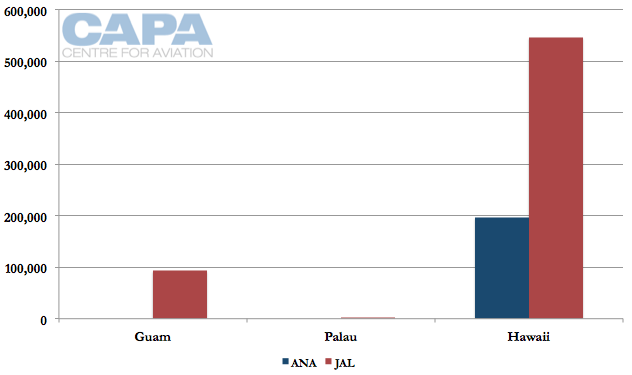 JAL's Hawaii seat capacity in 2015 is about half that of 2005. Guam is down to 25%, Saipan has been suspended and Palau remains a very small part of the market. 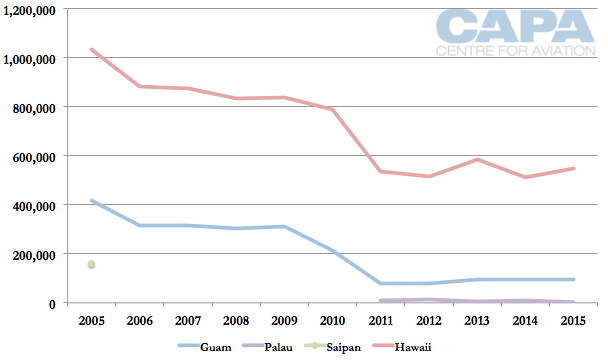 ANA in 2015 is smaller than its peak in 2013, but above pre-2011 levels. Although it is growing past historical highs while JAL is receding, ANA's capacity has been significantly less. In 2005, ANA had 15% of the Hawaii seat capacity as JAL. 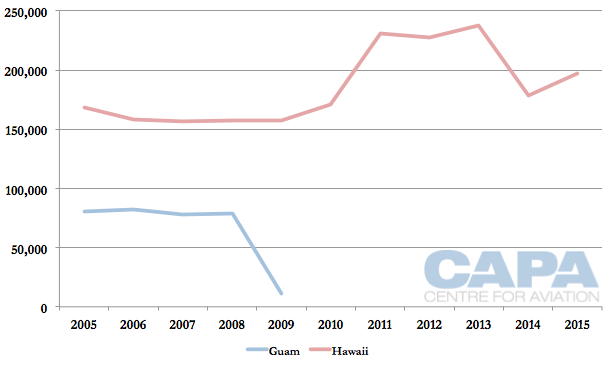 Hawaii has been able to cultivate a loyal Japanese following. Some Japanese adults have been to Hawaii over 20 times for holidays. Hotels in Hawaii accommodate to Japanese visitors better than perhaps anywhere else in the world. Some joke about Japanese passengers who turn up to the airport for a Hawaii flight without their passport, unaware that Hawaii – so common with Japanese – is actually in a foreign land.

Even if the anecdote is not true, it illustrates the close relationship between Japanese and Hawaii.

Almost three quarters as many Japanese visit Hawaii as they do to the entire rest of the US, despite the huge size difference.

There were more visitors to the US mainland in the late 1990s during that boom, but aside from that period visitor figures have hovered around 2 million to the US (excluding Hawaii) and 1.5 million to Hawaii. There were about 1.5 million Japanese visitors to Hawaii in 2012, 2013 and 2014, and limited preliminary figures for early 2015 show this trend continuing (so far). 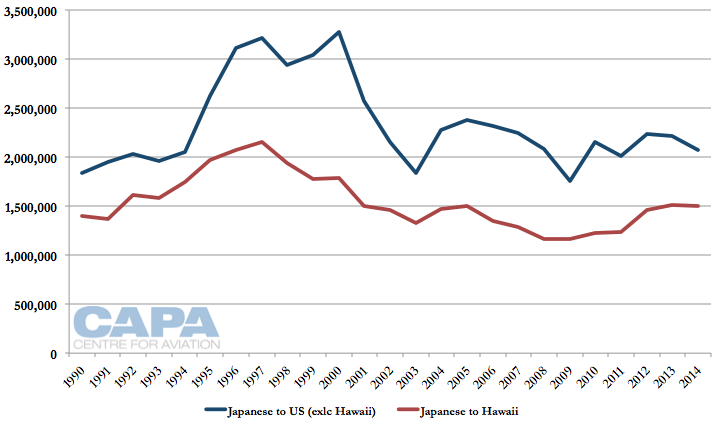 ANA during northern summer 2015 increased Tokyo-Honolulu from daily to double daily, but it is still the third largest after JAL and Delta. Delta has been decreasing Japan-Hawaii seat capacity since 2013. ANA is approaching Delta's size in the market, but they are both still smaller than JAL. ANA's use of Vanilla Air could see the group have a larger presence in Hawaii.

All of Japan's Hawaii flights are to/from Honolulu. JAL served Tokyo Narita-Kona until cancelling the service in 2010. JAL lobbied for access to Maui but local interests did not want mass tourism development. More recently, Hawaiian Airlines proposed a Kona-Tokyo Haneda service when Delta's Seattle-Haneda slot was being re-assigned, but the slot went to American for Los Angeles-Haneda. 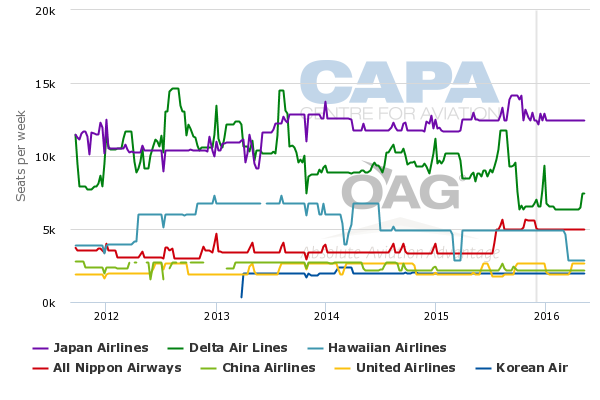 Overall Japan-Hawaii capacity is receding to 2012 levels, mostly due to capacity cuts from Hawaiian Airlines and Delta. This is despite the entry of Korean Air on the Tokyo-Honolulu route, re-deploying its fifth freedom rights on Tokyo-Los Angeles to Honolulu instead. 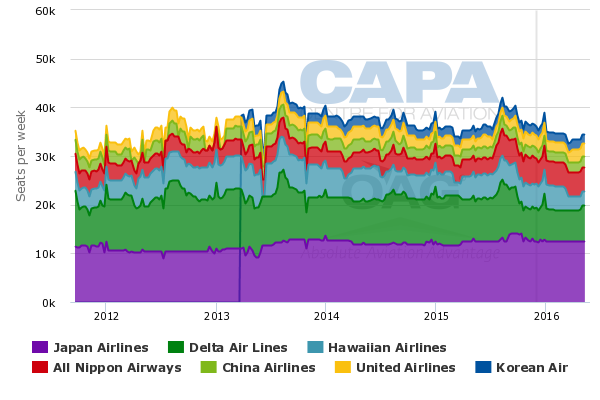 Japan is the largest international market for Hawaiian Airlines

ANA's historical under-representation in beach markets perhaps created an opportunity for Hawaiian Airlines as it embarked on an international strategy to diversify itself away from the US mainland market. As CAPA has previously noted, Japan is the single largest international market for Hawaiian Airlines, accounting for 40% of seats (second largest Australia is 27%). 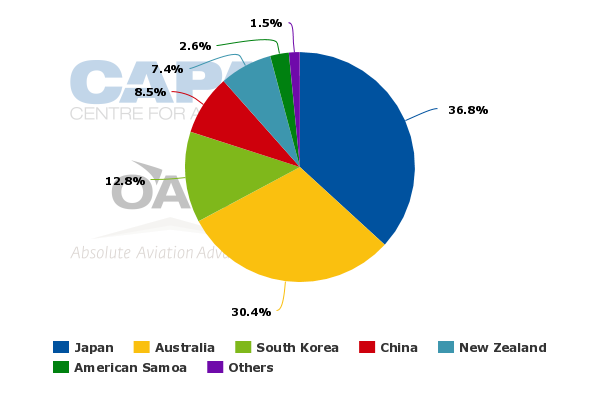 Hawaiian entered the Japan market in 2010 with a service to Tokyo Haneda and undertook most growth until 2012. The weakening yen had a significant impact on Hawaiian's Japan operation as travel to Hawaii became considerably more expensive; Hawaiian dropped Fukuoka but broadly maintained its network elsewhere. While the reduction in fuel prices helps to offset the weakening yen, the largest expense on these typically long trips is local charges in Hawaii, and these receive no lift from lower fuel prices.

While Hawaii may be the largest beach market from Japan, Vanilla Air could have a sizeable presence in other markets, which are under-developed. These could potentially be reached from Vanilla's Tokyo base with A320s. To Guam, JAL may be the only Japanese carrier but United and Delta are bigger, and there are fifth freedom operators. 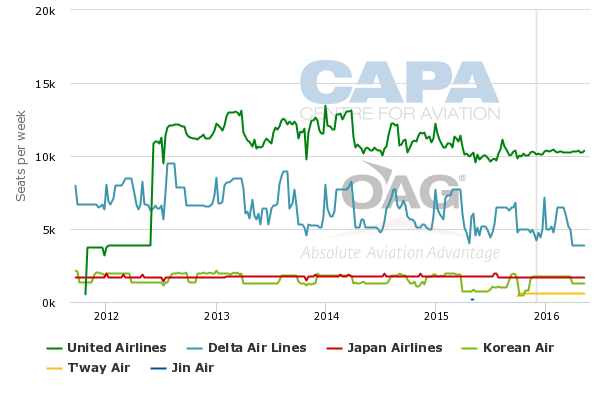 To Saipan, Delta has been reducing capacity while Asiana has limited seasonal service. 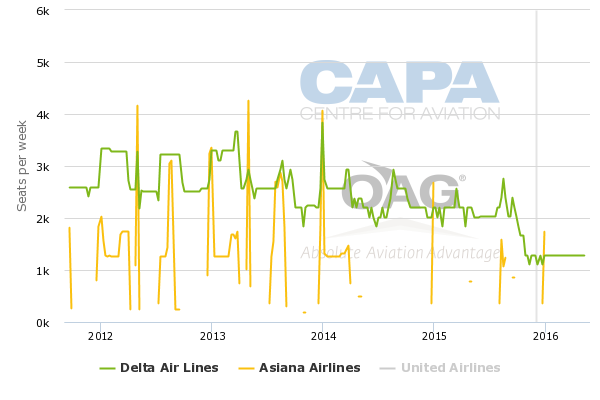 There are opportunities for Vanilla Air to have a closer dual brand strategy with ANA. Beach/resort markets in the Pacific would be conservative given the limited competition, and ANA's general under-presence. It will be a tall order to bring the LCC model, still under refinement in Japan, to a widebody platform. But starting in the relative isolation of leisure markets may provide the comfort to embark on a more ambitious strategy in Southeast Asia where competition is bolder and ANA already has a significant presence.

In contrast, the JAL-Jetstar Japan dual brand strategy concentrates on Jetstar Japan's domestic network adding group size, such as in onsen destinations and Nagoya, where ANA is bigger. JAL also partners with Jetstar Japan for international connections (Jetstar Japan is based at Tokyo Narita, where JAL still has a large international network but limited domestic flights).

An ANA-Vanilla dual brand operation in beach markets need not provoke a swift change at JAL-Jetstar Japan; ANA-Vanilla has its work set out for it. A bigger task is ANA's growing need to integrate its two LCCs, Peach and Vanilla.

As is typically the case, the strategic opportunity is relatively straight forward. The challenge is changing the mindsets that have produced two overlapping LCCs within one full service airline group.