Since as far back as the 1980s, global economies have generally shifted from being led by government expenditure towards greater involvement by the private sector. Whether for infrastructure, research and development, financing or technology, the expansion of the private sector is still rampant in many facets of both developing and developed economies. Sales of state enterprises worldwide reached USD185 billion at the end of the 1980s and, more recently, privatisation revenues have risen from approximately USD110 billion in 2008 to USD266 billion in 2016, according to the Organisation for Economic Co-operation and Development.

For infrastructure, the need for substantial investment has been well documented. The McKinsey Global Institute estimates USD3.3 trillion should be invested p/a through 2030 just to support expected global rates of growth, though most countries are not investing nearly enough, with there being an expected annual global shortfall of USD350 billion.

The Trump Administration published ‘Delivering Government Solutions in the 21st Century’ on 21-Jun-2018, a sweeping reform plan and proposals for regulatory restructuring. Nestled within the document is a rebooted attempt to shift air traffic control (ATC) responsibilities from the Federal Aviation Administration to a private, non profit entity.

Proposals for corporatising the FAA have a lengthy history

“Public trust in the Federal Government has declined over the last decade, calling into question how well the current organisational constructs of Government are aligned to meet Americans’ needs in the digital age”, the document reads.

The Trump Administration believes a 21st Century government is “fundamentally a services business, and modern information technology should be at the heart of the US Government service delivery model”.

While the Government believes the entirety of the Department of Transportation is not in need of a wholesale reorganisation, a spin-off of FAA’s ATC services is expected to enable the US aviation system to respond better to consumer needs and be a driver of delivering better responses, and to respond better to modernisation.

However, proposals to corporatise the FAA’s ATC services have been floated since the Reagan Administration, and have simply not been met with congressional support. The most recent push, led by House T&I Committee chairman Bill Shuster, had already received the Trump Government’s support but was abandoned following a lack of support among congressional Republicans.

In 1987 New Zealand became the first country to corporatise its air traffic control system, and since then nearly 60 other countries have followed suit. The example most often heralded by corporatisation supporters is NAV CANADA, which moved from a government entity under Transport Canada to a private, non profit corporation in 1996.

NAV CANADA is financed by publicly traded debt and has invested CAD1.8 billion (USD1.4 billion) in technology, equipment and infrastructure since its corporatisation. The ANSP is the world’s second largest provider by traffic volume, handling 12 million aircraft movements p/a over 18 million sq km. The company has also diversified its revenue streams with creation of the ‘NAVCANatm’ line of integrated ATM products, applications and services, sold internationally and deployed at more than 100 sites worldwide.

But perhaps the most striking segment of NAV CANADA’s business is its model for airport charges. In May-2017 the company introduced a new a rate revision scheme which included provisions for a one time refund totalling CAD60 million (USD45 million) to airlines – previously unheard of in the industry.

NAV CANADA attributed the rate changes and refund due to "higher than anticipated revenues" in FY2017. The company plans to continue operating under the revised rate scheme in 2018, forgoing a previous plan to increase charges 0.4% as at 01-Sep-2018. Overall, the ANSP’s rate changes have diverged from any correlation with the Canadian Consumer Price Index and have either remained stable or declined since 2005.

A corporatisation attempt of the US FAA would predominantly target similar results to those of NAV CANADA in charges and self-sustaining investment activity. NAV CANADA is still subject to legislation that regulates its approach to setting charges.

The size and complexity of the US airspace system are unmatched

It is easy to draw comparisons between NAV CANADA and the FAA at first glance, but the reality is that the scale of required investment between the ANSPs could not be more different. While NAV CANADA has invested USD1.4 billion since 1996 and oversees the world’s second largest system by traffic volume after the US, the US FAA’s investment requirements are far larger.

The FAA’s Next Generation Air Transportation System (“NextGen”) project proposes congressional investment of USD20.6 billion and industry financing of USD15.1 billion by 2030 in order to cater to the 15 million aircraft movements that the FAA handles p/a.

Already the world’s largest aviation market, the US aviation system will also have to accommodate a 65% increase in traffic over the next 20 years.

The financing estimate is the latest issued to the US Government Accountability Office (GAO) and is in range of approximations made in 2007, when work on NextGen was initiated. GAO finds that USD7.4 billion from government funding has been invested for the period from FY2007 to FY2016. 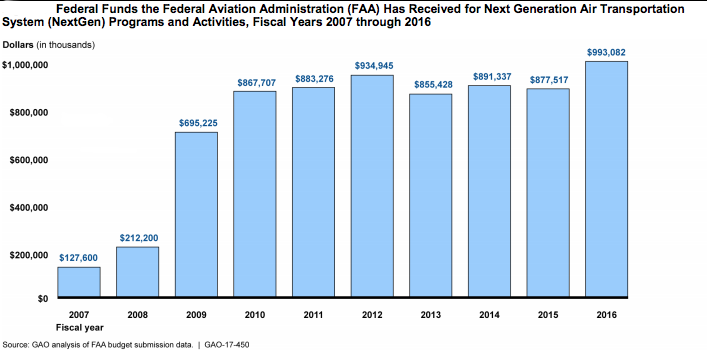 While the GAO’s analysis of FAA financing suggests it is on track with forecasts, IATA claims NextGen is inherently delayed and could require investment two to three times more than initially envisaged.

Declarations of the project being over budget have been echoed by both Airlines for America and the Trump Administration, along with the President himself. In early 2017 Mr Trump referred to the US aviation system as “totally out of whack”, and NextGen as “way over budget... behind schedule... and when it's complete it's not going to be a good system”.

Despite the industry not agreeing on funding estimates, it has been established that while the FAA initially expected to complete roll-out of all NextGen platforms by 2025, this date is now only reserved for the main aspects of the system, with other technologies now targeted for deployment as late as 2030.

Uncertainty remains around the ability to fund NextGen privately

The main advocacy behind a corporatisation of the FAA is to provide it finally with a predictable funding stream. Since 2007, it has been a political football. Congress has passed close to 30 short term reauthorisation extensions for the FAA but only one long term reauthorisation bill. The FAA’s ability to plan investments without a predictable level of financing has undoubtedly impacted the rate of NextGen implementation.

However, if ATC responsibility was to move to a corporate entity, other challenges could develop. The time and associated costs required to complete a transition from FAA to another ATC operator, which includes the time it could take to terminate or revise current contracts between FAA and companies that produce NextGen technologies, could delay NextGen even further.

In the first version of the corporatisation legislation all ATC equipment was to be transferred from the FAA to the new entity at no cost, whereas in the NAV CANADA scheme CAD1.5 billion (USD1.1 billion) was paid to the Canadian Government for the equipment.

The philosophy behind corporatisation is for a new provider to provide the same service in a more efficient manner, while reducing cost to users and the public.

The question is: would a move to a corporatised entity eventually be to the benefit of the US aviation system? And if pursued, would the change be worth the inevitable costs and delay associated?

Despite the apparent merits of a move, and the limited downside risk with corporatisation, conflicting assessments of the FAA’s aptitude for NextGen make a Congressional decision to move as unlikely as ever.