Continued positive trends in passenger yields and unit revenues have occurred in Mar-2011 linked to a recovery of high-fare business travel demand. However, despite improvements in the demand and yield environment, carriers are now facing a new challenge in escalating fuel costs, which have reached their highest level since 3Q2008, which could result in a more challenging revenue in the months ahead.

14 consecutive months of revenue growth for US carriers: ATA

The Air Transport Association of America (ATA) reported that passenger revenue, based on a sample group of carriers, rose 13% in Feb-2011, following growth of 10% in Jan-2011, marking the 14th consecutive month of revenue growth and reflecting the ongoing strengthened demand for air travel as airlines enter 2011. 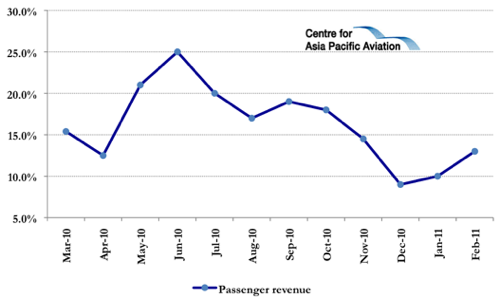 Miles flown by paying passengers rose 2.1% while the average price to fly one mile rose 10.8%. Domestic revenue grew 11.5%%, fuelled in large part by a 10.5% increase in yield. International market performance remains strong as passenger revenue grew 17%, led in particular by a 27% increase in Pacific revenue. ATA also noted that the break-even load factor among US airlines is “finally below 80% again” as yields close the gap to unit costs. 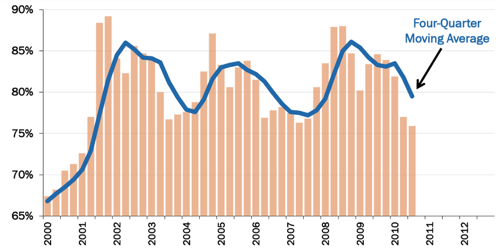 ATA also noted that the price of air travel, despite recent increases, has not kept pace with US inflation. Inflation rose 42.8% between 3Q1995 and 3Q2010, leaving a fare shortfall of USD71.

* BTS reports average fares based on domestic itinerary fares (round-trip or one-way for which no return is purchased). [Averages do not include frequent-flyer or ―zero fares.‖] Fares are based on the total ticket value, which consists of the price charged by the airlines plus any additional taxes and fees levied by an outside entity at the time of purchase. 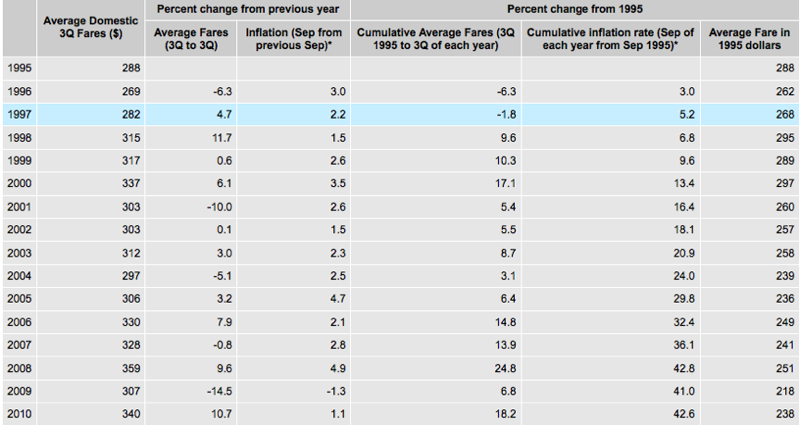 ATA also noted the negative impact of fuel prices. Mr Heimlich stated airlines in 2011 are contending with rapidly climbing jet-fuel prices that have outpaced crude-oil prices to reach their highest level since Sep-2008. Meanwhile, US airlines could record for fuel costs when they report quarterly results in coming weeks, paying around USD3 billion more in 2011 so far. ATA stated that based on its estimates, fuel as a percentage of operating expenses could hit between 35 and 40% compared with the 36% level set in 3Q2011. "We've got to be awfully close to that. That wouldn't be established, though, until we see them report out," Mr Heimlich said in an interview with Reuters.  The ATA projects fuel costs in 1Q2011 will be around USD3 billion higher than 1Q2010, increasing by around 35% to USD11.8 billion, or about 35%.

While fuel costs are a concern, the overall fuel increase does not pose the type of fundamental threat it did in 2008, when some large US airlines feared insolvency as the economy weakened. "It's completely different from the last time," US Airways Group CEO Doug Parker told Reuters in an interview. "The last time what happened is oil prices went up and we never were able to pass it along," Mr Parker said. He noted that healthy demand in a stronger economy has enabled carriers to pull off an initial round of fare increases to boost revenue and offset part of the increased fuel bill.

Mr Heimlich stated there has been a paradigm shift created by recent mergers and downsizing that have enabled carriers to better target premium business customers. Mr Heimlich also said executives are getting better at managing their balance sheets, keeping more cash on hand and being mindful of the potential for price volatility. 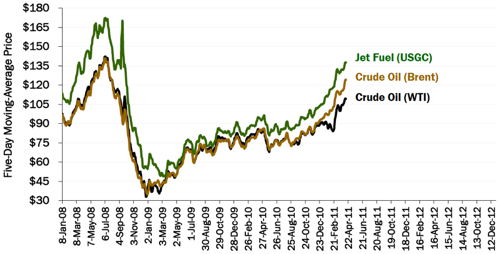 Source: ATA and EIA (for WTI and Brent crude oil and US Gulf Coast jet fuel)

ATA stated that, excluding hedge gains or losses, if US airlines had to contend with USD3 per gallon jet-fuel prices for all of 2011, their fuel bill would increase USD15 billion, from USD39 billion in 2010 to an estimated USD54 billion in 2011.  Annually, a USD 0.01 cent increase in a gallon costs US airlines USD175 million with a USD1 increase in a barrel to cost them USD415 million.

Impact of increased fuel costs on US airlines 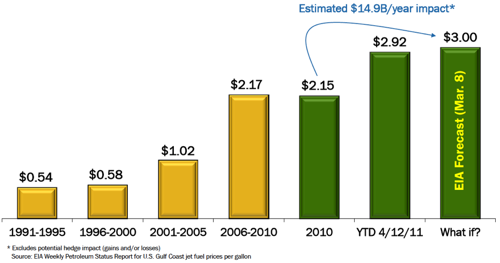 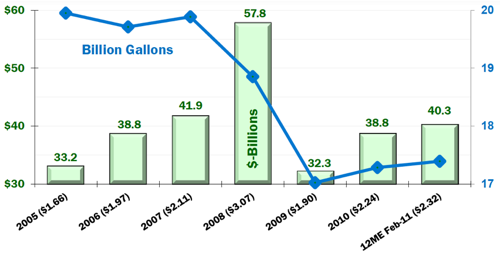 Sources: ATA, Energy Information Administration and DOT (for US passenger and all-cargo airlines operating worldwide in scheduled and nonscheduled services)

United and Continental's Mar-2011 combined consolidated passenger revenue per available seat mile (PRASM) increased an estimated 8.0% to 9.0% compared to the pro forma results from Mar-2010, while combined mainline PRASM in Mar-2011 also increased an estimated 8.0% to 9.0%. United and Continental's combined Mar-2011 PRASM results were reduced due to the impact of accounting for its trans-Atlantic JV revenue sharing agreement which is accounted for as net revenue in 1Q2011 and all periods going forward. 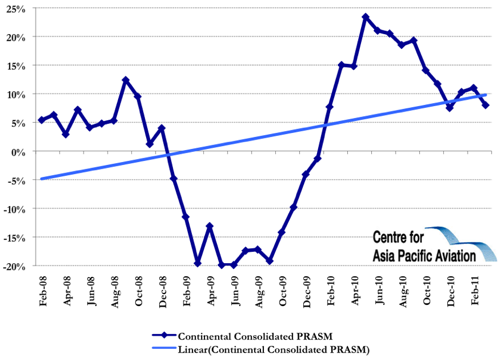 US Airways reported a 9% increase in PRASM in Mar-2011 but did not disclose RASM estimates. 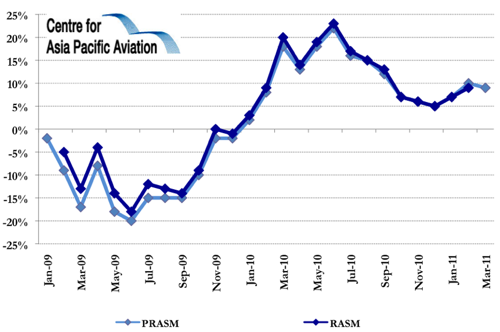 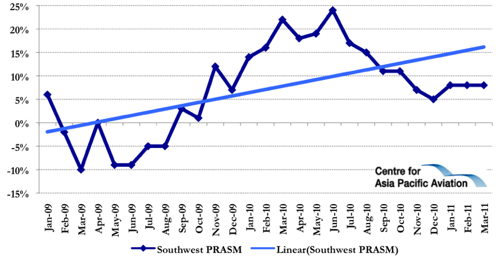 JetBlue reported the largest year-on-year PRASM growth among the reporting carriers, at 11% in Mar-2011. 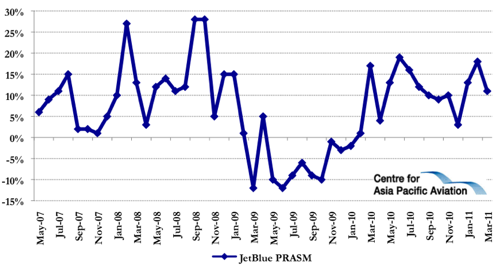 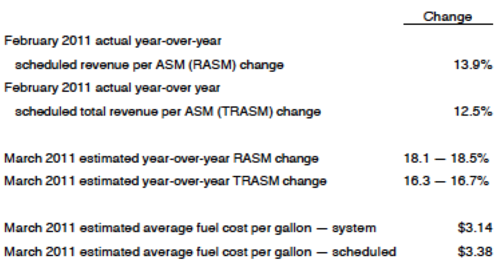