Just as the COVID-19 crisis moves into a more manageable and endemic state, airlines are now facing fallout from the war in Ukraine and also the challenge of rising oil prices.

Even with the combination of Omicron (variant of the coronavirus), the war in Ukraine, and fuel price volatility, three of the largest US airlines – American, Delta and United – are encouraged by current revenue and demand patterns.

Despite those new challenges, the major US global airlines remain bullish on demand, reflected in all three recently anticipating that they will beat previous revenue guidance for 1Q2021.

They have opted to trim their 1Q2022 capacity guidance, driven in large part by the Omicron variant of COVID-19 that swept across the country in early 2022. They are also confident that they can recoup the increase in fuel prices without wiping out any of the current strength they see in demand.

The US 'Big 3' experiencing improved trends in 1Q2022 revenue

Even with the combination of Omicron (variant of the coronavirus), the war in Ukraine, and fuel price volatility, three of the largest US airlines – American, Delta and United – are encouraged by current revenue and demand patterns.

For example, American’s departing CEO Doug Parker recently told attendees at the J.P. Morgan Industrials Conference that the company had recently had three days of customers purchasing tickets that were the “highest days ever, two of them 15% higher than we’ve ever had”.

He noted that those record days were against a backdrop of less inventory, and without a full recovery in international and business travel. “That just says, if nothing else, demand for travel is really strong”, Mr Parker said.

American said that it now expects revenues in 1Q2022 to decrease by 17% compared with the same period in 2019. Previously, the company expected a drop between 20% and 22%.

Delta’s president Glen Hauenstein told the audience at the same event that the airline had recently had the highest cash sales day in its 100-year history.

Delta now expects its 1Q2022 adjusted operating revenues to drop 22% from pre-pandemic levels, compared with prior expectations of them being down 24%-28%.

At the same event United’s chief commercial officer Andrew Nocella remarked that system bookings for future travel had improved close to 40 points since the first week of 2022, and business travel had increased more than 30 points since the peak of the Omicron coronavirus variant in Jan-2022. He also said that United did not pre-sell seats for the business summer season at lower yields.

“We saved those seats, and we’re selling them at much higher yields”, he said.

In United’s updated guidance the company said that it expected revenues for 1Q2022 to be near the better end of its previous forecast of a decrease of 20% to 25% versus 1Q2019.

All three of those airlines have opted to trim their 1Q2022 capacity guidance, driven in large part by the Omicron variant of COVID-19 that swept across the country in early 2022.

American expects a decrease of 10% to 12% compared with pre-pandemic levels, versus prior guidance of a drop of 8% to 10%.

United now expects its capacity during the first quarter to fall 19%, compared to previous targets of being down 16%-18%.

Delta has also refined its capacity targets to 17% below 2019 levels, compared with previous guidance of 17% to 19%.

With so many unknown variables occurring in the market at the moment, those airlines are not offering specific guidance. Data from CAPA and OAG show that US domestic capacity, measured by ASKs, will remain below 2019 levels until the start of the busy summer high season in the Northern Hemisphere in early Jun-2022. 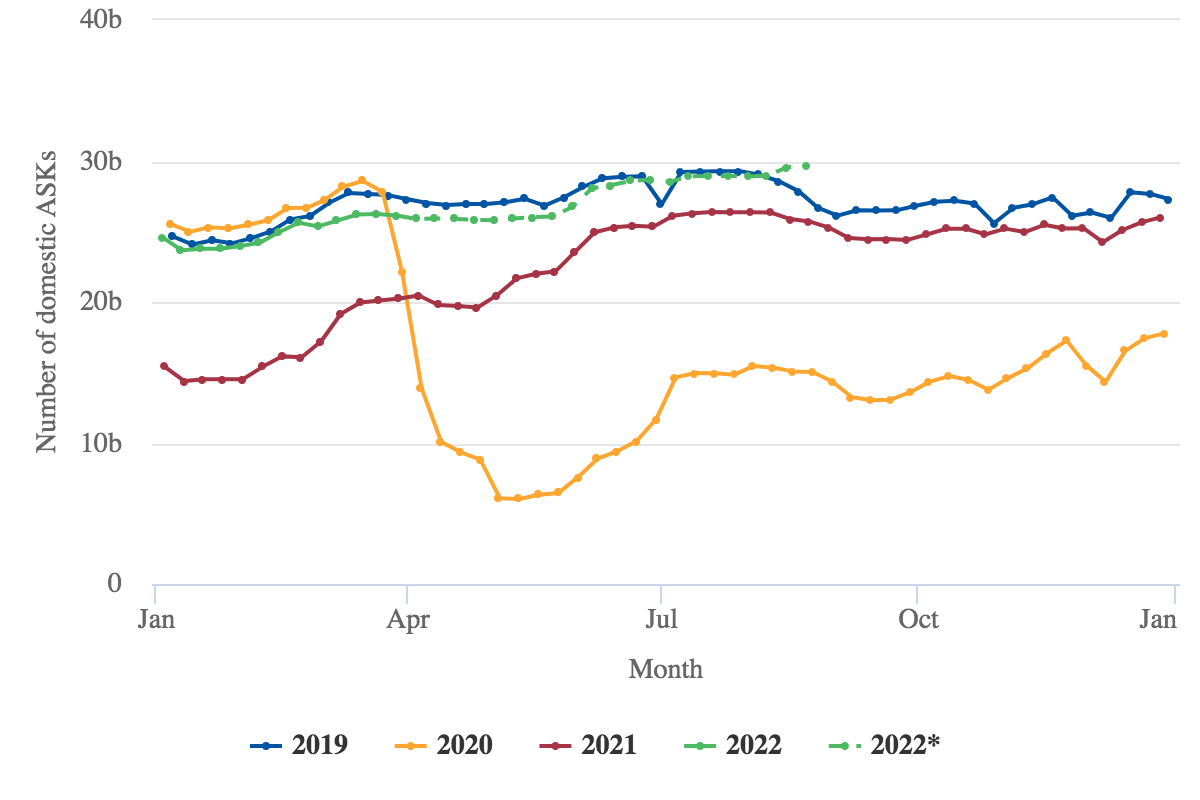 * These values are at least partly predictive up to 6 months from 28-Mar-2022 and may be subject to change.

Mr Hauenstein of Delta explained that the airline’s capacity would remain below the industry through the summer by at least a few points.

“And as we head into the fall, we’ll take another observation of what the demand environment is…we have the capability of getting to 100% of capacity restoration starting in September [Sep-2022] and beyond,” he said.

Indeed, at the moment Delta’s system ASKs are projected to remain below 2019 levels through late Aug-2022. 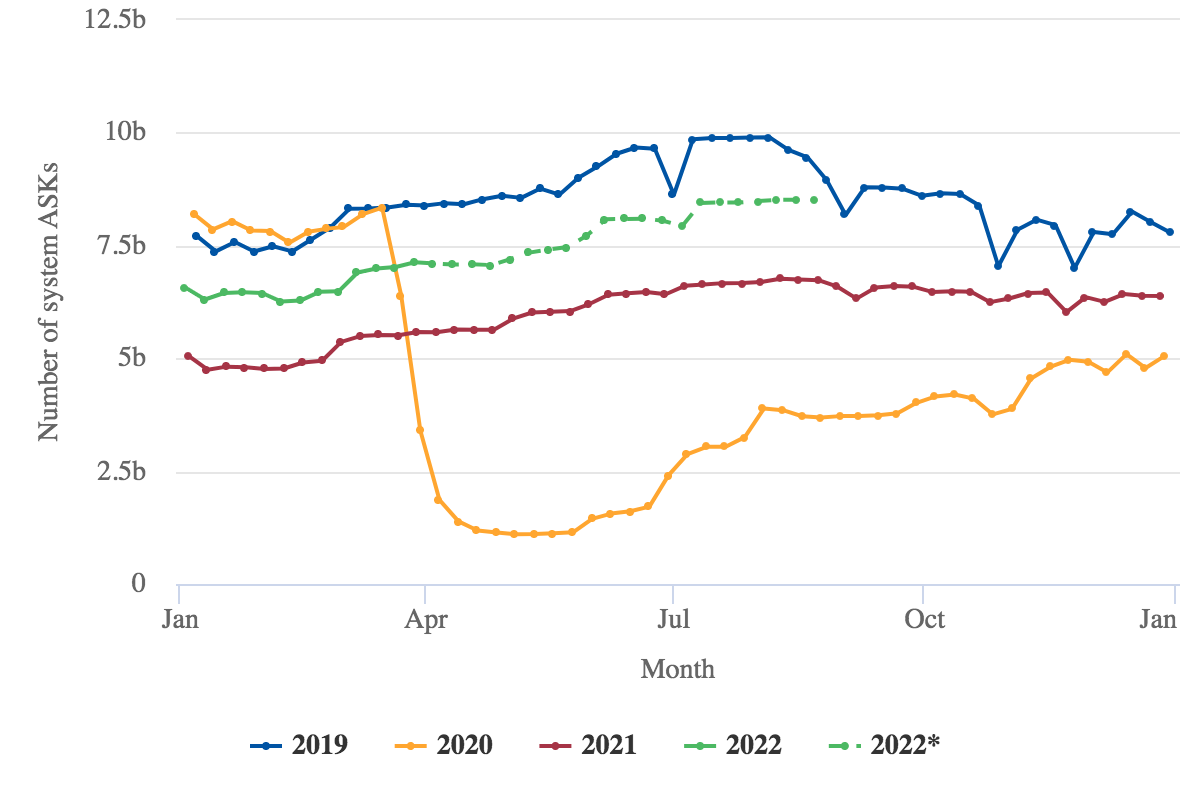 * These values are at least partly predictive up to 6 months from 28-Mar-2022 and may be subject to change.

United’s system ASKs will also remain below 2019 levels, but less than Delta's as the summer season gets under way.

“Matching capacity to demand has always been our focus and we have [adjusted] and will continue to adjust as necessary”, said Mr Nocella. The airline has stated that its capacity 2022 will be down in the high single digits compared with 2019.

American, Delta and United are passing on higher fuel costs, for now

For now, Delta and United believe that they can recapture the increase in fuel costs through increasing ticket prices and other forms of revenue management.

Mr Hauenstein noted that he thinks a lot of industry observers have questioned whether or not airlines could pass on higher fuel costs to the end-consumer. He explained that given Delta’s demographic and average client, the airline feels that “is something we can easily achieve,” and will likely achieve in 2Q2022 as fuel prices fluctuate rapidly.

“We need to recapture somewhere between USD15 and USD20…on an average ticket value of USD200”, Mr Hauenstein explained.

United was capturing a large proportion of the rise in fuel costs, said Mr Nocella; not 100%, but the majority, he explained, adding that the airline had adjusted its capacity to make sure that “we can capture all of it this year.”

Mr Nocella noted that United was not seeing any demand destruction, “today we’re passing through a majority of the cost of oil.”

The latest obstacles seem to be manageable for US airlines

At the moment American, United and Delta seem to be managing the near-term fallout from the latest challenges that have surfaced.

There is still the challenge of how the rest of 2022 will unfold, but those airlines believe trends going forward remain in solid shape.