It has never been clear what, if any, strategic goal Delta, American and United had in seeking to reverse the US' open skies agreement with the UAE and Qatar. By attacking the Gulf airlines on the alleged grounds that they were subsidised, there was always a serious danger that the clearly protectionist action would spark a wider threat to the very concept of open skies that has served US airlines so well in expanding their international influence.

Now that risk may be materialising as Mexican airline unions take to the streets to protest the threat to their existence if Mexico signs a very liberalised, almost open skies agreement with the US. Certainly there is talk in aviation administrations around the world that the open skies concept is under review in the US. This is not good news for anyone, least of all the US airlines.

Perhaps the intent was simply to place a cap on the level of capacity of Emirates, Etihad and Qatar in the US. Perhaps this view was supported by the controversial way the US Department of Transportation has squatted uncomfortably on the application of Norwegian International to fly to the US (although this may be backfiring, as Norwegian adds capacity under its own brand). There could scarcely have been a realistic hope that the open skies agreement with the UAE would be renegotiated. Among other negatives, this would put at risk FedEx's major Middle East hub in the UAE, a hub only made possible by the open skies regime.

The US and Mexico revised their air service agreement in late 2014, essentially lifting restrictions on the number of airlines allowed to operate on each transborder route. The previous agreement limited most US-Mexico routes to two airlines from each side while for some routes a total of three airlines from each country has been allowed.

The new agreement is not a fully liberalised open skies agreement but does essentially create unlimited access on most routes with the exception of flights to Mexico City Juarez, which is a slot constrained airport. The lifting on restrictions of flights between the two countries is slated to be implemented in Jan-2016.

Shortly after the US and Mexico negotiated an expanded agreement, Delta Air Lines and Aeromexico filed an application for anti-trust immunity to establish a joint venture to compete more effectively with American and United, which are the largest airlines operating between the US and Mexico. Aeromexico and Delta were initially optimistic that their agreement will be approved by the end of 2015.

American currently has a leading 24% share of seat capacity between the US and Mexico while United has about a 19% share. Delta’s share is about 9% and Aeromexico about 17%, according to CAPA and OAG data for the week commencing 19-Oct-2015. Under the joint venture agreement, Delta and Aeromexico would leapfrog American and United and account for a leading 26% of the seats on offer.

As Delta and Aeromexico touted their proposed joint venture, questions surfaced if the agreement would be viable under the new air service agreement given that approval of joint venture partnerships is contingent on a true open skies pact existing between two countries.

At one point the US DoT had stated that it was suspending its procedural schedule to approve the proposed JV, citing two factors. First was the lack of sufficient information to determine if the agreement met established standards and policies. Second was the fact that the liberalised US-Mexico agreement is not a fully fledged open skies deal.

American has a joint venture with fellow oneworld partners Japan Airlines (JAL) and United has a similar arrangement with Star partner All Nippon Airways. Delta at one point pursued JAL while it was in bankruptcy and recently failed in its attempts to secure a stake in Japanese airline Skymark, which is currently reorganising under bankruptcy protection.

Trans-Pacific and trans-Atlantic immunised joint ventures have recently garnered criticism from unaligned airlines that do not participate in those tie-ups. Hawaiian, JetBlue and cargo operators Atlas Air and FedEx have also teamed up to counter the campaign launched by American, Delta and United that claims the three large Gulf airlines Emirates, Etihad and Qatar have received illegal subsidies.

Hawaiian and JetBlue in particular have highlighted the detrimental effects of joint ventures, namely a significant amount of traffic falling into the hands of a few airlines. JetBlue has called for a US government review of joint ventures to ensure those pacts benefit consumers.

As Delta pushes for a joint venture with Aeromexico, JetBlue has emphasised to the DoT that if the application for antitrust immunity is approved, Delta and Aeromexico would hold nearly half the slots at constrained Mexico City Juarez (the country’s largest airport). JetBlue in Oct-2015 launched service to Mexico City from its focus cities in Fort Lauderdale and Orlando, but stated that the slot times were less than optimal and hard to obtain. JetBlue argued that a grant of “ATI would likely further inhibit competition at an airport where new entrants and carriers with few slots are already disadvantaged”.

Based on schedule data from OAG for the week commencing 19-Oct-2015, Aeromexico (including Aeromexico Connect) currently accounts for about 45% of slots at Mexico City with Delta holding less than 2%. 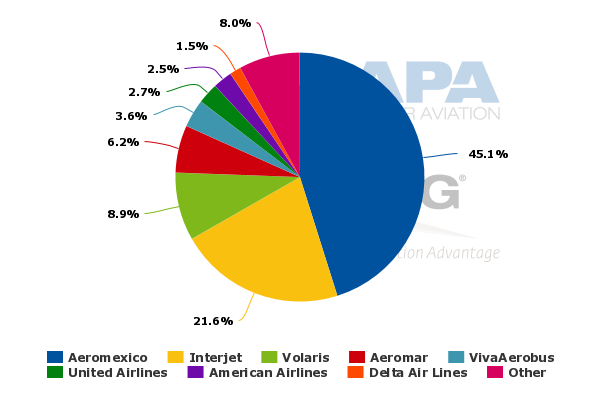 Looking only at flights from Mexico City to the US, Aeromexico has about a 36% share and Delta 9%. Their combined presence of 45% is nearly half, and well above the 17% held by the second largest operator between Mexico City and the US, United.

The approval of the new Mexico-US air transport agreement is subject to approval by Mexico’s Senate. It appears that until Mexican legislators endorse the arrangement approval approval of antitrust immunity for Delta and Aeromexico by the US government is in limbo.

Mexico’s pilot and flight attendant unions have weighed in on the enhanced aviation agreement, recently staging a protest at Mexico City Juarez Airport, claiming the deal is imbalanced. According to Facebook posts union officials have also met with Senators to express their opposition to the agreement.

The Mexican unions have pointed out that three of every four flights between the US and Mexico is operated by a US carrier. “We are not going to take any step backward in the defense of the job of each worker of the aeronautic industry,” Mexico’s ASPA pilot union reportedly declared.

US airlines have historically had a larger share of passengers between the US and Mexico given the relative maturity of the US market compared with Mexico, which is still a market in transition as the country’s middle class is expanding and trading in bus journeys for air travel. US carriers also have much larger networks and scale, giving them an advantage over their smaller Mexican counterparts. US carriers currently carry more international passengers to and from Mexico than Mexican carriers, even when including passengers carried by Mexican carriers to countries other than the US.

US airlines accounted for 62% of passengers in Mexico's international market for the first eight months of 2015, logging growth each month during that period, according to Mexican SCT data. Total international passengers travelling on foreign airlines grew 6% year-on-year from Jan-2015 to Aug-2015 to 18.2 million.

Mexico international passenger traffic for US, Mexican and Canadian carriers: 8M2015 vs 8M2014

After Mexicana’s demise in late 2010, the Mexican aviation market was left in flux as upstart LCCs Volaris, VivaAerobus and Interjet together with Aeromexico worked to fill the void. In Jan-Aug-2009 Mexicana was the largest Mexican airline operating between the US and Mexico.

International passenger growth among Mexico’s airlines for Jan-2015 to Aug-2015 was 29% as those companies transported 6.6 million passengers to international markets, mostly US transborder routes. The increase is obviously at a much faster clip than international airlines, but Mexican airlines have still not entirely filled the void left by Mexicana and are working off a much lower base. This is likely the concern for the country’s airline unions, which are still upset over the demise of Mexicana.

Even if the Big 3 US airlines had not launched their campaign against the Gulf airlines, there would have likely been protest from Mexico’s unions about what they deem as an imbalance in the updated bilateral agreement given the ability of US airlines to quickly add service on Mexican transborder routes. But the protests and opposition of the unions is against a backdrop of an unprecedented time in global aviation when the essence of open skies agreements are in the spotlight.

US airlines have been the largest beneficiaries of those agreements. Emirates argues that during 2015 US airlines and their joint venture partners dominate frequencies in numerous markets where the US has open skies agreements. With an already dominate share of traffic between the US and Mexico, the enhanced agreement stands to bolster that position.

Legacy carriers' share of frequencies to 63 open skies countries with direct or one stop service to the US: 2015 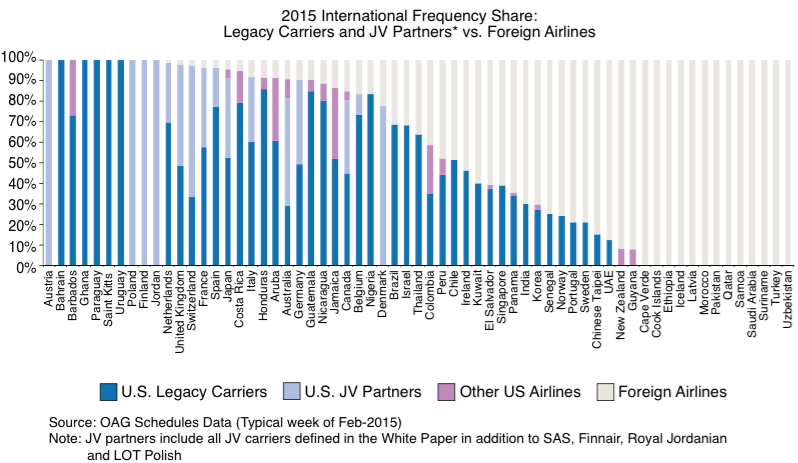 The protests also cast a light on the larger issue of the Big 3 taking a protectionist stance against the largest Gulf carriers while aiming to capitalise on the benefits of certain open skies (or very liberalised) agreements with other countries. Delta is also now seeking to establish a joint venture with Brazilian airline Gol, taking advantage of an open skies pact between the US and Brazil which takes effect in Oct-2015.

It is a delicate path to walk as governments attempt to navigate open skies pacts within the context of the three largest US global network airlines picking and choosing the agreements that work best for their own advancement.

The question arising over the protests by Mexico’s unions about an agreement that is not technically an open skies framework is if other global labour groups will start to question the balance of current US open skies agreements.

It is also interesting for Delta, which has been the most vocal about the alleged subsidies to the Gulf airlines, but has been a beneficiary of many open skies agreements the US airlines have forged. Recently, Delta has attempted to use those pacts to bolster its competitive position in regions – Mexico and Brazil – where it has a distinct disadvantage relative to its rivals American and United. Delta has taken equity stakes in both Aeromexico and Gol, and joint ventures with those airlines would be highly beneficial as Delta works to improve its competitiveness with its large US rivals as well as against foreign competitors.

Delta, American and United could find themselves navigating an increasingly hostile global environment as they urge for open skies reviews while reaping the benefits of open skies with Brazil and a loosened bilateral with Mexico, while the whole open skies regime stands at a crossroads.