US Airways delays Airbus orders, improves liquidity - and the market likes it

At the end of a year in which airlines have raised billions of dollars to stave off bankruptcy or credit crises, US Airways on Tuesday announced it had arranged a deal to improve liquidity. And the market was impressed; its stocks rose 6.5% on the day, then another 7.0% yesterday, although it is still bumping along the bottom. 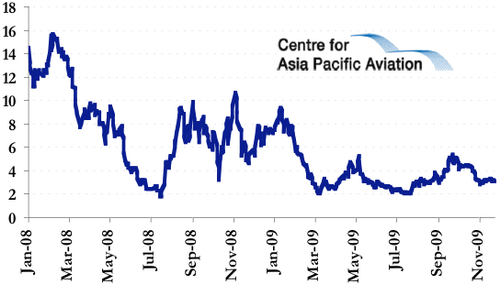 The cash will be valuable, but there is a price

The carrier’s financial improvement was at the expense of new aircraft deliveries over the next three years. At the end of 2010 it expects to realize USD450 million in liquidity and end this year with USD150 million.

The airline has been high on analysts’ endangered list, along with other U.S. legacy carriers. Yesterday’s announcement is just the latest in similar financial maneuvers and cutbacks designed to avoid a third trip into bankruptcy court. It filed in both 2002 and 2004.

The company lost USD1.7 billion in the nine months ending 30-Sep-2008, when it was being seriously damaged by fuel prices it was unable to offset with higher yields. This year, with a more realistic fuel price, things have looked considerably better. In the nine months to 30-Sep-2009, US Airways lost only a relatively modest USD125 million. 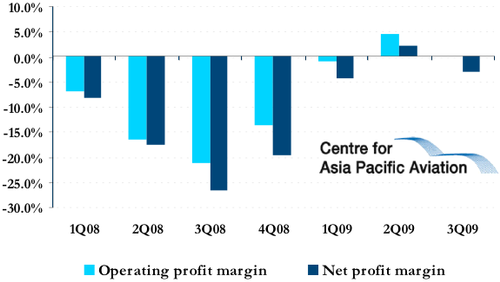 But there is a lot more to do at US Airways than simply put cash in the bank. Although it has contracted – less so than several of its competitors – yields have come back only marginally. 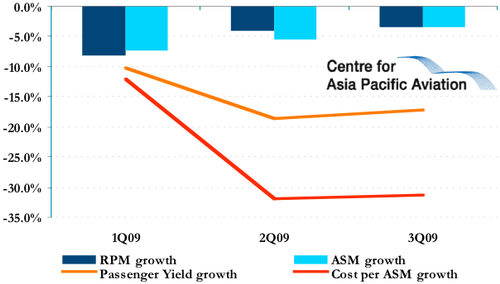 Costs are still too high and yields too low

US Airways is among the highest cost operators in the US, but it doesn’t have the luxury of higher yields to offset them. That said, the carrier has seen an apparently impressive ccost reduction over the past year, from USD0.16 cents/ASM in 3Q08, down to USD0.11 cents/ASM in the most recent quarter. But in reality almost all of the improvement can be attributed simply to cheaper fuel. The following graph, which compares total cost with non-fuel cost over the past year shows the underlying cost per ASM is almost unchanged. US Airways does not impress among its peers. 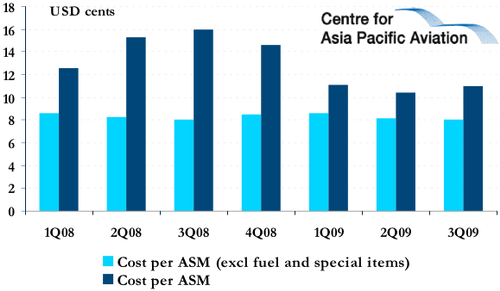 Moreover, this is against the background of a period where the carrier’s average stage length has increased measurably – a feature which will generally reduce unit cost per ASM:

Sector length per passenger graph for US Airways 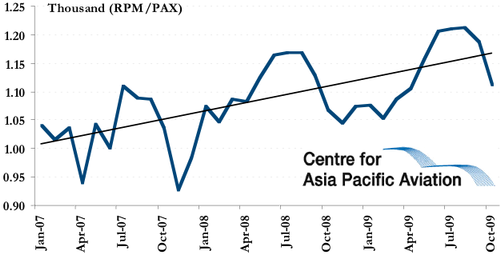 That said, the route retrenchments noted below will again bring the average down. US Airways had shown the largest capacity increase of any US carrier on the North Atlantic over the summer, so withdrawal from some longer routes will reduce average passenger trip length.

While it expects to continue deliveries of 28 aircraft for which it already has financing in place, US Airways is deferring delivery of 54 Airbus until 2013 in addition to the deferral of the A350 XWB from 2015 until 2017. The postponement of its fleet renewal program includes aircraft originally set for delivery between 2010 and 2012.

The move takes out about USD2.5 billion in capital expenditures over the next three years and reduces near- and medium-term obligations to Airbus by about USD132 million.

The deferrals announced on Tuesday are part of an 82-aircraft replacement program that included 72 A320s and 10 A330s. The 2015 deliveries, now deferred to between 2017 and 2019 included 22 A330s and A350s. The deferrals had already been baked into Airbus production plans – they came as “no surprise” to Airbus.

A strategic pattern over the past 100 days

“This is our third major strategic move in the past 100 days, following announcements of our innovative slot transaction with Delta Air Lines and the realignment of our network to focus on our most profitable flying,” said US Airways Chairman and CEO Doug Parker. “These moves are part of our continuing efforts to improve our balance sheet and return the company to profitability…with these strategic initiatives behind us we believe US Airways is well positioned to take full advantage of the recovering economy.”

The Tempe, AZ-based company is dramatically reducing capital expenditures over the next three years, extending certain debt maturities and eliminating the need, next year, to access aircraft finance markets, which the company said, remain “uncertain and expensive.” The deal, with key business partners improves near-term and future liquidity, said the company, which expects to finish the year with $150 million in liquidity.

The deferrals do not however mean that fleet renewal is off the table. “Although we will slow deliveries during the next three years, over that period we will continue to modernize our fleet, which is already one of the youngest in the United States,” said Executive Vice President and Chief Financial Officer Derek Kerr. “The company will take delivery of two A320 and two A330 aircraft in 2010 and an additional 24 A320 family aircraft in 2011 and 2012. We have financing commitments for all 28 aircraft and believe this is a more manageable delivery rate given the current economic environment.”

In addition to the aircraft deferral, US Airways has arranged credit facilities in the amount of USD95 million and USD180 million of aircraft financing commitments for the 2010 deliveries. Also, the company has agreed with Barclays to permanently lower the monthly unrestricted cash condition precedent for the advance purchase of frequent flyer miles; it may also defer for 14 months the amortization of USD200 million advanced in connection with the previous purchase of miles.

The retrenchment announced last month included dropping five European destinations and returning its Beijing route authority to the Department of Transportation. US Airways also pulled in its network to focus on Charlotte (CLT), Philadelphia (PHL) and Phoenix (PHX), and a focus city at Washington's National Airport (DCA).

However, it retained its LaGuardia-Boston shuttle service after earlier announcing the closure of its Boston, LaGuardia and Las Vegas crew bases.

It also did a slot swap with Delta for 42 slot pairs at DCA slots, for 125 slot pairs to Delta at LaGuardia. It said that the four points, by the end of 2010, will represent 99% of the airline's available seat miles (ASMs) versus roughly 93% during October. The company also said that the Delta transaction is expected to improve its profitability by more than USD75 million annually.

Undoubtedly this latest move again provides some breathing space for US Airways. But survival in the long term is the goal, there are still a lot of hard yards to be won. Despite operating a young fleet – at least by US airline standards – there will need to be more cost cuts to come.