US Airways, American and Delta lose value, while TAM rises on hopes of 12% growth in 2010

In light trading, US airline stocks predictably moved down on Monday, following the terrorist incident on a Northwest flight to Detroit over Christmas. A more fundamental problem was also the rise again of oil prices, back up to USD78.

Regional operator and private charter operator, Expressjet, benefited from the news, up 5.8%; private jet operations benefit from the hassle factor at airports and from the higher level of security they argue they are able to offer.

Brazil’s domestic market is projected to grow as much as 12% in 2010, according to the new CEO of TAM, formally confirmed yesterday after acting in the role for two months, Libano Barroso. The Wall Street Journal quoted him as saying, "Economists are forecasting the economy will grow around 5% in 2010. We see the aviation market expanding double that, maybe two and a half times that," said Líbano Barroso, who on Monday was confirmed as TAM's chief executive officer after having served as acting CEO since October.

TAM has also today announced a broadening of its relationship with LAN, expanding codeshares to seven new points in Argentina, with LAN gaining “diverse” new codeshare points over Sao Paolo and Rio deJaneiro. " The expanded codeshare with LAN Argentina strengthens the service synergy we are developing with Group LAN in South America. We anticipate that this new stage of our partnership will further stimulate passenger numbers across the continent", said TAM’s Commercial vice-president of Planning, Pablo White Castello. 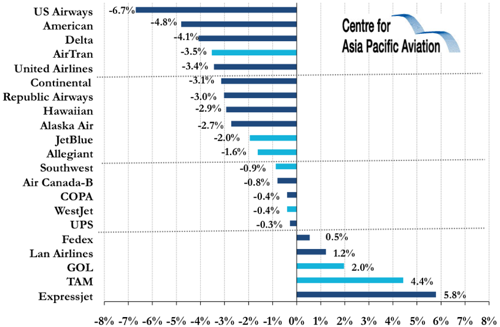