An airline challenge to the 2008 Department of Transportation rule allowing airports to hike landing fees during peak times, was rejected by a federal appeals court yesterday.

Of course the challenge had been on rocky ground ever since the airlines themselves began not only imposing higher fares for travel during peak times in Nov-2008, but expanding the list of when peak times are peak beyond the usual holiday periods. Airports have yet to impose the peak-period pricing.

The rule was designed to force airlines to efficiently schedule aircraft during peak times by trimming the number of flights and using larger aircraft. In a 27-page opinion, The US Court of Appeals for the District of Columbia Circuit rejected the ATA objections that the rules encouraged discriminatory pricing, saying the department showed creativity “that should be welcomed on its merits, not spurned for its novelty.” ATA also said the Department did not have the authority to impose such a regulation.

Buoyant day on the market

In share trading yesterday, ExpressJet (+6.6%) bounced back from falls the previous day, while JetBlue (+5.3%), United Airlines (+4.8%), Continental (+4.5%) and American Airlines (+4.1%) were all strongly higher as the US corporate reporting season started with a bang with healthy earnings from Alcoa and Intel. 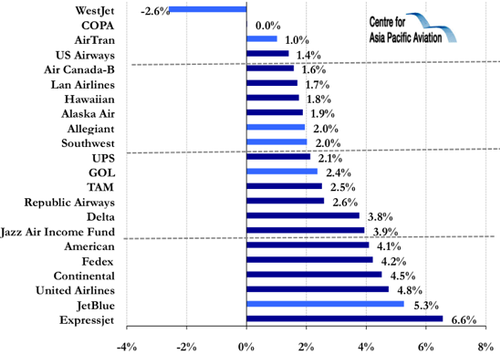