Although Latin America remains challenging as currency pressure continues in Brazil and Argentina, the three large US global airlines have detected positive trends emerging in the region, with improvement in Mexico on the horizon as some capacity rationalisation takes shape in Mexico-US markets.

Capacity is also falling in the Brazil-US market and Delta Air Lines had declared plans to slash supply to Brazil by 20% in 2019. Delta also believes that Latin America should be its best performing regional entity in 1Q2019.

One bright spot for US airlines is the Caribbean, with the large three US global network airlines citing positive revenue trends in those markets, which could help to offset some of the continued weakness in other Latin regions.

US airlines cite improving trends in the Mexico-US market

Latin America was a challenging region for US airlines in 2018 due to currency devaluation in Brazil and Argentina and softness in the Mexico-US transborder market due to overcapacity.

American’s 4Q2018 unit revenue performance in Latin America improved on a sequential basis, with company executives noting that it had also improved on a quarter-to-quarter basis in Brazil and Argentina.

The airline also cited improvement in Mexico on a sequential basis, with some recovery in demand. However, American cautioned that pricing on Mexican routes remained soft.

Delta Air Lines returned to positive unit revenue growth in Latin America in 4Q2018 and carrier management remarked that unit revenues on Mexican routes had grown 3% year-on-year. Delta has an immunised cross-border joint venture with Aeromexico and combined, the two airlines represent nearly 24% of the seats deployed in the market.

Near the end of 2018 Delta management remarked that there was a lot of capacity rationalisation occurring in the Mexico-US market and “a little bit more certainty around the business markets”.

A data snapshot from CAPA and OAG shows for the week of 21-Jan-2019 Delta’s JV partner Aeromexico has cut its seats in the Mexico-US market by 13%, and the airline is in the midst of cutting five US transborder routes to rationalise capacity and combat currency pressure.

Delta also concluded it was also posting positive results in Mexican beach regions as terrorism threats in those markets appeared to be waning.

In late 2018 Delta executives concluded that Brazil “continues to be a laggard”, but added that “Brazil should turn in the April [2019] time period”.

During a 4Q2018 earnings discussion Delta’s management stated that the airline was cutting its capacity to Brazil by 20% in 2019 and the airline expected Brazil to become a positive contributor to unit revenue as 2019 progresses.

Data from CAPA and OAG shows that American, which is the largest airline by capacity operating between the US and Brazil, with a nearly 25% seat share, cut its seats by 24% for the week of 21-Jan-2019, and Delta’s seats were reduced by 10%.

Overall, seats in the market for that period dropped by just 1%.

The Caribbean remains a bright spot for US airlines

One bright spot for US airlines in their overall Latin American markets during the last three months of 2018 was the Caribbean.

American cited strong unit revenue growth in the region for the previous seven quarters, and remarked that it continues to post a positive performance.

Delta concluded that the Caribbean was its best performing sub-entity in Latin America during 4Q2018, with a 5% unit revenue improvement.

Capacity between the US and the Caribbean is ticking up slightly, with seats up 18% year-on-year for the week of 21-Jan-2019, and it seems that uptick should continue through mid-2019.

Executives of JetBlue, which has 23% seat share, recently concluded that the airline “has seen some capacity growth in the region”. 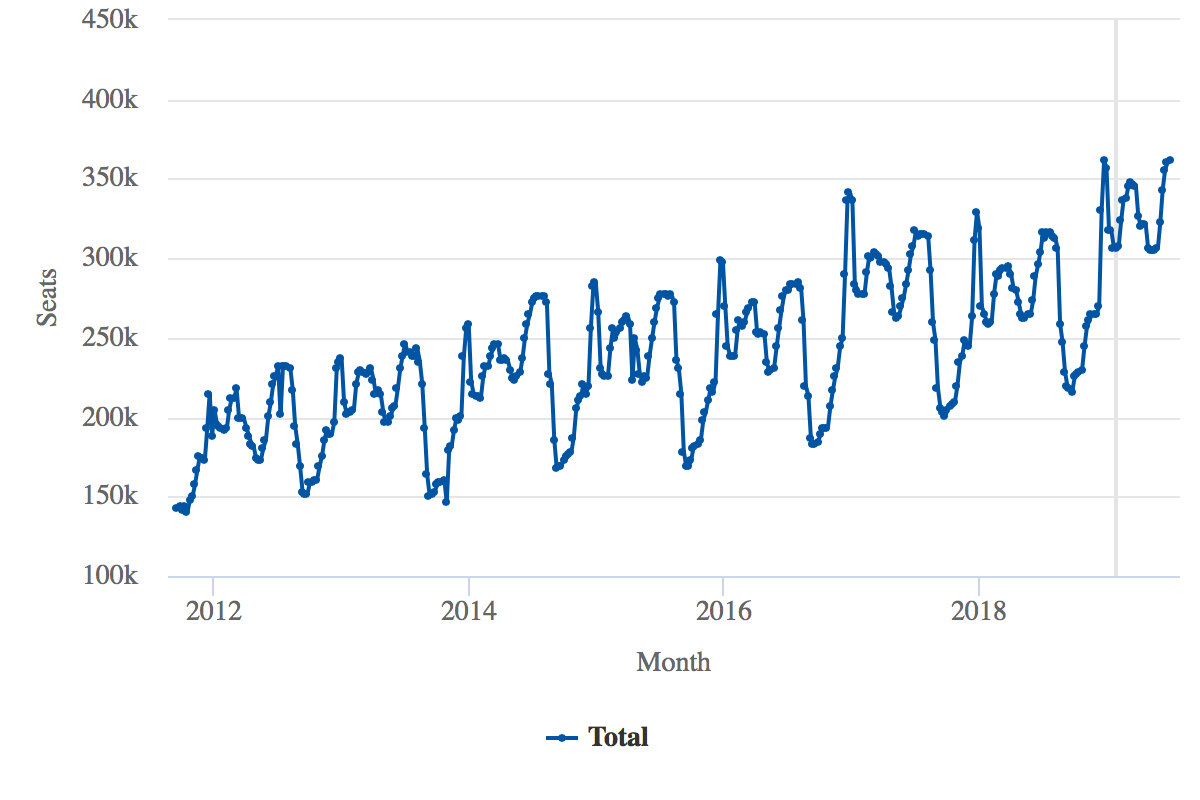 Some of the capacity could be a shift from some Mexican leisure markets. The Mexican resort area Cancún has also been the subject of travel advisories during the past year as a result of violence and incidents of alcohol-related blackouts from consumption at its resorts.

For now, the US economy is performing solidly, so there’s likely strong US point of sale leisure demand for Caribbean markets, especially in the US winter season. JetBlue’s management stated that the capacity growth was in response to strong demand. But overall, the airline is pleased with its unit revenue performance in the region.

Positive signs in Latin America are encouraging for US airlines

Positive signs emerging in Latin America for US airlines are encouraging after currency fluctuations and overcapacity in some markets created challenges in posting positive revenue results in the region during 2018.

A hoped-for rebound in Latin America may be necessary now more than ever. Just as trends in that region seem to be moving in a positive direction, the trans Atlantic is showing some signs of weakness, so moving toward a positive performance in Latin America could help offset headwinds emerging for US airlines on their North Atlantic routes.