What would otherwise have been a relatively optimistic week for the airline industry will likely be somewhat tempered as US airline CEOs take in the enormity of the cost of what has been termed the worst disruption in aviation since 9/11.

Now, in its fifth day, the Icelandic volcano continues to send clouds of ash spewing across the North Atlantic and Europe. In its first four days, the US industry lost USD80 million in revenues, according to Boyd Group International. Early indications, according to the International Air Transport Association, suggest a revenue loss of USD200 million a day. The organization said its estimate was conservative since it does not count the costs associated with re-positioning aircraft and taking care of passengers.

That will make the second quarter guidance restrained indeed. That - and the uncertain duration of the volcano's impact will literally cast a pall over the industry.

Some are more affected than others. Continental is most exposed to Atlantic airspace closures, with almost one quarter of its seat production (ASMs) in 1Q2010 on Atlantic routes. Air Canada was next at 20.6%, followed by Delta (18.3%) and United (17.4%). It should be noted too that these figures do not include behind-gateway connecting traffic, which adds significantly to these totals. 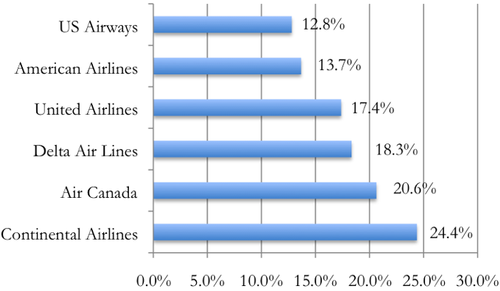 Expectations for the week: (1) Merger talk

All but US Airways and United are now rolling out their first quarter financial reports this week. There will be a focus on merger-related questions, given the United-US Airways-Continental activity since this will be the first public opportunity to query CEOs on the subject since the US Airways-United negotiations were announced. With the three mainline carriers in talks the biggest question now is what American is going to do. For now it is decidedly the odd man out, along with Alaska Airlines with its strategically placed Seattle hub.

Regardless of what is or isn’t said, there promises to be much additional merger news in the coming weeks and months, especially surrounding what will happen to US Airways, if United chooses to go with Continental instead. That would be bad news for the Phoenix-based carrier and, of course, shares at US Airways dropped on the suggestion that Continental was also talking to United.

Of course, analysts have been pushing merger activity since mid-fourth quarter which forces one to wonder how much of a role they had in the frenzied pace of activity. It is probably not cynical to observe that they have been benefiting from the subsequent stock activity. United stocks have been the key beneficiary lately, while US Air and American have suffered. 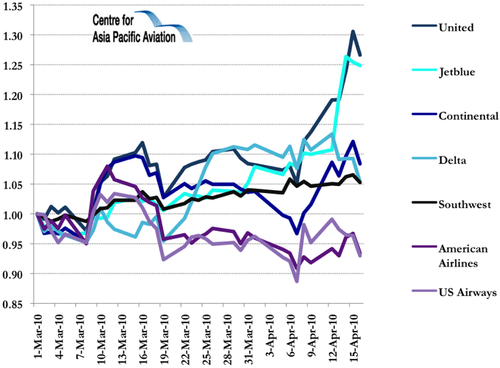 There is always the possibility of a three-way merger, but this may be unpalatable with regulators, given the normal anti-business tenor of a Democratic administration – especially this one. Congress is also likely to want to intervene, with merger hearings.

But the resulting market concentration would be be more limited than may first appear. If the combined entity were to rationalise (ie reduce service) too strenuously, the bank of low cost airlines now populating the skies will be quick to fill any gaps domestically.

Internationally, issues might be raised by Star Alliance's competing global alliances, but in the US context, these features should perhaps be offset against the survival alternatives for US Airways if it is left on the shelf.

But, practically speaking, the real questions with a three-way tie-up would be integrating the respective airlines' pilots. Few managements would look forward to that challenge

A US domestic market that exists with three legacy carriers has long been expected. Indeed, many suggest it is inevitable, so why not now? In fact, it would not be at all surprising, given that it is perfectly acceptable in the US auto industry. Think of the foreign manufacturers as having the same role as the low cost carriers. There will still be plenty of choice since the LCCs will, in no way, stand still as the market evolves.

Even without all the merger activity, the week would likely have reflected a change in the tenor of the CEOs' outlooks. The fourth quarter calls launched with AMR CEO Gerard Arpey, who was downright pessimistic about the future. By the end of that week, however, things were evolving so fast that CEOs were expressing guarded optimism based on forward bookings and increasing RASM from the devastating first and second quarters of 2009.

The increases in bookings and RASM will tell the story for the first quarter but it will be, as United has repeatedly suggested that the real story will be the comparison year-on-two.

While this week’s earnings calls promise to be more optimistic than those on the fourth quarter, Boyd Group International President Mike Boyd cautions that it is not time to break out the champagne just yet. Indeed, he is suggesting the industry should not be planning on a rebound.

“There will be no material spike in domestic airline traffic in 2010,” he said. “First, airlines are already basically full - over 80% average load factors. That means not a lot of seats out there left to sell, at least when people want to travel. Then a quick capacity comparison between this summer and last year replaces media hype with hard data. The bottom line: virtually no increase in system capacity to speak of. In the case of most major carrier systems, any year-over-year increase is so small as to be classified as ‘noise’ - not any intentional up-scaling of seats across their systems. Shifting of aircraft resources, yes. A big increase in resources, no.”

Boyd therefore predicts the third quarter will be strong for bottom lines, owing to virtually flat capacity. He also pointed to plans to pull the plug on more capacity should the recession deepen. “With 9.7% unemployment, close to 20% under-employment, higher taxes in the wind, jive-time ‘job creation’ stats that are bulked out with census workers, and USD85+ oil, this, isn't a robust picture of the future,” he said. “Any credible passenger forecast must consider these factors.”

This week we start out with Delta on Tuesday, which will likely reveal more of what it has been able to gain from the Northwest merger. It was that merger that signalled that Wall Street definitely thinks bigger is better when it comes to airlines.

Watch for news about recovery in the front of the aircraft as well as forward bookings, both of which will probably be good – at least compared to last year. Be that as it may, the real question is whether or not there has been a fundamental consumer shift; the answer to that will not come from the airlines. Economists report it has been anemic with nominal spending rising only 0.3% last month short of the expected 0.5%. This was the slowest pace since October, according to the US Department of Commerce which reported on Monday. Adjusted for inflation, spending actually fell. 0.2%, the weakest report since Sep-2005. Personal incomes rose only 0.7% for both March and February, more than the expected 0.6%. For the quarter, spending increased 3.8%, a decline from a 4.2% gain in the fourth quarter.

Of significance is the fact that the US economy has been a consumer-driven economy. That has resulted in too much debt by the American consumer for far too long. And, like the US government debt, it has become decidedly toxic, forcing more and more consumers to pay as they go rather than pour on more debt. It is questionable whether the post-recessionary economy will return to a buy-now-pay-later scenario.

Another point to watch for will be expectations on fuel prices, up about 10% over recent weeks. Finally, the news on ancillary revenue will be interesting. Several CEOs have suggested that such revenues will be the profit centre, not the sale of tickets.

The apparent success of the Delta-Northwest merger which will continue to gain synergies into 2012, and the chronic overcapacity in the business have prompted much of the merger activity. Indeed, we face an entirely new industry from the prognostications made during the fourth quarter and analyst conferences earlier in 1Q2010. During the fourth quarter there was little discussion of mergers, save for the probing questions of analysts smelling a turn around – and a fast buck.

During the more recent analyst conferences, however, the target had definitely moved. The two most vocal proponents – United and US Airways – kept signaling each other they were ready for another go at combining. However, most of the industry said they really wanted to see whether the Delta-Northwest merger was to be as successful as expected before moving forward on deals. Both United and Continental expressed that sentiment. For its part, Continental was coyly continuing the stance that it wanted to fly solo unless the market changed dramatically.

LCC mergers in the wind

Suggestions have been made about mergers in the LCC sector, so we’ll see if those CEOs make any comments. The growth in market share of the LCCs and their increasing sophistication increases their integration potential, as well as with their legacy rivals.

Meanwhile, during the latter half of last year and the first quarter, American was too busy keeping Japan Airlines and building oneworld to even comment on mergers. That is likely to make its first quarter conference call quite interesting, indeed, especially with respect to the JetBlue-American slot-swap-interline deal, which is seen as a prelude to more formal links.

It will also be interesting to hear whether all the merger activity will change the equation on the US Airways-Delta slot swap. For its part, Delta still wants the gain at La Guardia but a United-US Airways deal would just mean the slot swap would be for naught since that merger would have to be crafted to address the dominance of the two in Washington, DC. What, then, makes that swap worthwhile for US Airways?

The airline industry is never dull. There seems always something beyond the airlines' control that conspires against them. This year it is weather and geologic activity instead of the economy and the H1N1 virus that came last year. Speaking of which, watch for the impact of the JFK Bay Runway closure which began on 01-Mar-2010.

What can also be expected this week is hefty traffic gains from the year-ago period and projections on year-end results. Such projections so far, suggest the industry will again post losses for the year.