US airlines: capacity to rationalise as headwinds strengthen

Domestic and International ASK growth in the US is forecast to rise for 1H2019. This may spur some concern in the investment community as uncertainty on long term trade policy, stock market swings and the potential for a prolonged government shutdown coalesce to create pressure on the US’ economic performance.

The country’s largest airlines have varying forecasts for capacity growth in 2019, with Southwest and United planning increases solidly above projected GDP growth, whereas American has declared its capacity expansion this year would be close to the lowest in the US industry.

Signs are indicating some slight softening of demand in the US domestic market, which could result in revisions in current capacity forecasts; however, for now most of those operators feel satisfied with their 2019 capacity projections.

It is difficult to predict the ultimate trajectory of capacity in the US during 2019, but even as OPEC has opted to cut production and oil prices are rising, a certain level of volatility in pricing remains, which should result in the country’s airlines taking a rational approach to capacity management.

In Dec-2018 OPEC opted to cut production levels to boost prices, which had fallen on anxiety over the China-US trade spat and the potential of an overall slowdown in the global economy.

US airlines started 2019 with an overall positive view of demand trends, particularly in corporate revenues and most international markets. But early in the year Delta revised 4Q2018 unit revenue guidance from 3.5% to 3%, which – coupled with uncertainty over trade and general economic uncertainty – pressured airline stock prices.

American Airlines subsequently stated that its 4Q2018 unit revenues would grow just 1.5%, which was the lower end of its previous guidance growth, falling between 1.5% and 3.5%. The company said its unit revenue results were driven by lower than anticipated improvement in the US domestic market.

Large US airlines have varying capacity forecasts for 2019

Delta explained that its unit revenue revision was driven, in part, by the momentum in close-in yields slowing in Dec-2018, and before the revision the airline had stated that it was reducing its 2019 domestic capacity by 150 basis points year-on-year in 2019, noting that there could be some softness in domestic demand.

The airline plans to grow system capacity by 3% year-on-year in 2019, but will decelerate its domestic growth rate, “which we think will compensate for any weakness that we have that we know of today”, Delta President Glen Hauenstein recently said.

Southwest Airlines plans 5% capacity growth in 2019, with planned flights to Hawaii representing approximately half of the planned increase. The airline has not released its schedule for Hawaii and has stated that the partial US government shutdown could affect the airline’s planned service for Hawaii, according to the Dallas Morning News. Southwest is in the midst of attaining ETOPs approval from the US FAA for its service to Hawaii.

United Airlines plans 4% to 6% capacity growth in 2019 as part of a years long plan to grow within that range annually through 2020in order to regain lost share in the US domestic market. The company’s ASM growth in 2018 was 4.9% year-on-year.

During 2018 United added 93 new domestic flights, and even as its capacity growth was outsized compared to its peers (American’s approximately 2.5% ASM growth and Delta’s 3.6% ASM increase), it grew unit revenues by 4% for the 9M ending Sep-2018, compared with 5.5% for Delta and 3.5% for American.

American, which struggled with its unit revenue performance in 2H2018, has declared its capacity growth in 2019 should be the lowest in the industry, in line with or below estimated GDP growth, which is estimated at approximately 2.4%.

The airline has said that its growth will be driven by upgauge and by incremental flying from its most profitable hub in Dallas/Fort Worth, where it is gaining 15 gates for regional jets operations.

For now, American, Delta, United and Southwest, which comprise broadly 53% of US system ASKs (as of early Jan-2018), feel comfortable with their current capacity forecasts.

Data from CAPA and OAG show that US system capacity is projected to increase for 1H2019, but the growth does not appear markedly higher than in previous years. 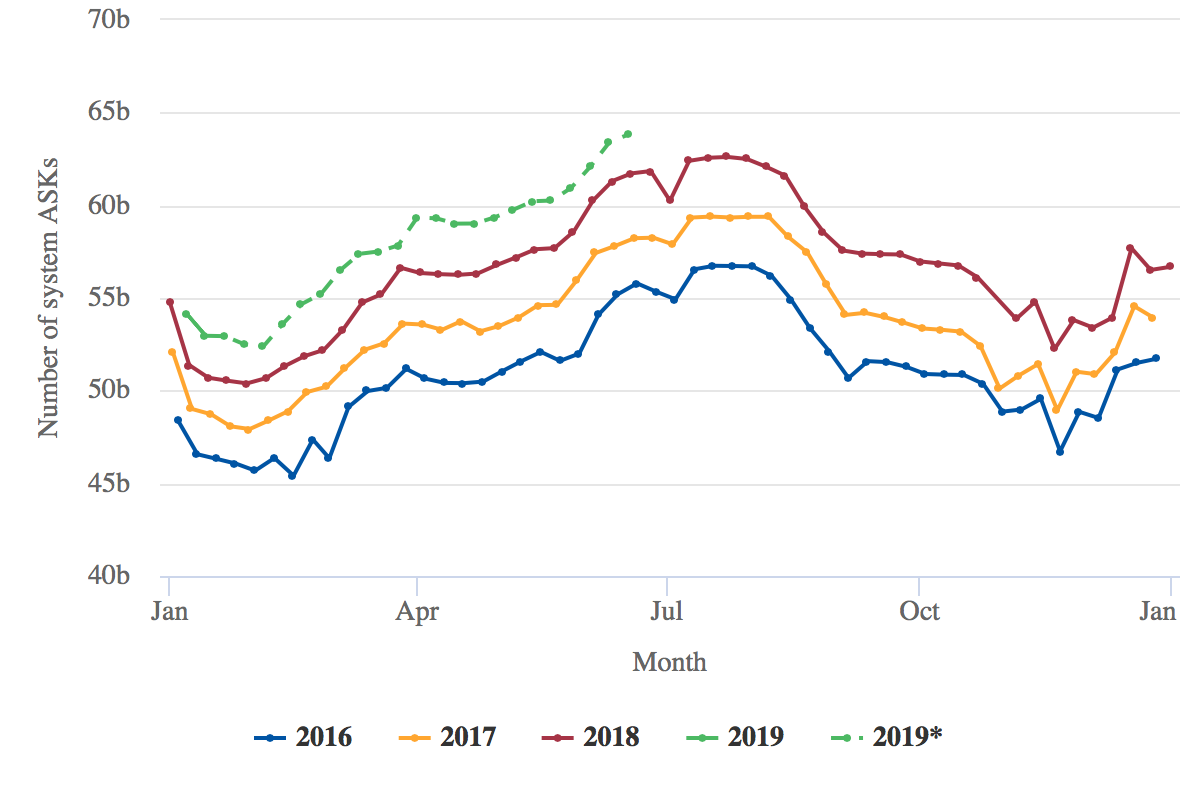 * These values are at least partly predictive up to 6 months from 07-Jan-2019 and may be subject to change.

Most airlines made their capacity decisions before fuel prices took a dive at the end of 2018 and have stressed they had no plans to veer drastically from those forecasts, even as fuel began its decline.

The rationale was that it is easier to remove capacity than add it back into the system.

OPEC’s production cuts took effect at the beginning of Jan-2019, but the Financial Times has reported that continued increases in oil prices could be hampered by the continued addition of low cost shale production in the US.

Although oil prices are likely to continue to climb, a certain level of volatility in pricing remains driven in part by US production and lingering uncertainty about the overall effects of the trade spat between the US and China.

Given the potential for continued swings in the price of fuel, US airlines are likely to continue adopting a cautious approach to capacity growth, and stress that they can spool down by returning aircraft to lessors and retiring unencumbered aircraft. Previously, United has calculated that it has 31 lease expirations in 2019 and 43 in 2020.

Fuel volatility and economic uncertainty are shaping up to create some potential headwinds for US airlines during 2019.

Comments by American and Delta seem to indicate that there could be some softening in the US domestic market. Both of those airlines have some of the lowest capacity growth forecasts among the country’s largest airlines and if conditions worsen, all of the country’s airlines will need to examine their growth plans for 2019.