Concerns that the continuing trade spat between the US and China could eventually hurt corporate demand appear to be fading as the three large global US airlines have optimistic outlooks for that high yielding passenger segment in 2Q2019.

American, Delta and United believe corporate demand should continue to remain strong, and Delta is seeing some firming of leisure demand as the US’ busy summer travel season begins late in the second quarter.

American and United are continuing to deal with the fallout of the grounding of the Boeing 737 MAX, which has resulted in both airlines lowering their projected capacity growth targets for 2019.

American has also trimmed its earnings forecast as the grounding and higher fuel costs are hampering the company from reaching its initial earnings targets.

Delta has consistently offered positive views on corporate demand during the trade dispute between the US and China that has lasted more than a year. Part of that bullishness likely stems from a solid US economy. The country posted GDP growth of 3.2% in 1Q2019 and consumer confidence is also growing.

At the beginning of 2Q2019 Delta’s management explained that in its most recent corporate travel survey 90% of travel managers expected to maintain or increase their travel spend in the quarter, which was a record for a survey conducted in a second quarter. During 1Q2019 Delta’s corporate revenues increased 10% year-on-year as average corporate fares improved by 2%.

American also stated that its recent corporate customer survey showed 90% of respondents were planning to increase or maintain their spend year-on-year in 2019.

Delta also cited robust leisure demand at the start of 2Q2019, with forward yields for every month of the quarter in positive territory on higher bookings. That is an improvement over the choppiness in leisure trends that Delta experienced at the beginning of 1Q2019.

United’s new revenue management system Gemini helped the airline post a 13% increase in corporate revenues in 1Q2019. With Gemini, United has been holding more seats for billing later in the booking curve.

The company’s executives have explained that United had been very conscious in ensuring that it made changes in its booking curves, and the success it achieved with those changes in 1Q2019 should continue in 2Q2019.

American has removed the aircraft from its schedule through late Aug-2019 and has calculated that it will take a USD350 million hit to 2019 pretax earnings due to the grounding. The airline expects that having the aircraft out of service will create a negative 0.5% effect on its total unit revenue per available seat mile (TRASM) in 2Q2019. American is forecasting 2Q2019 TRASM growth of 1% to 3% for the second quarter.

Airline executives have said that the MAX cancellations were higher yielding and it was reaccommodating customers into seats that would have sold at higher fare levels.

At the beginning of 2019 American forecast earnings per share (EPS) of USD5.50 to USD7.50 for the year – well above its 2018 EPS of USD4.55. With the effects of the MAX grounding and a USD650 million increase in its fuel cost guidance for 2019, American has lowered its EPS guidance for the year to USD4 to USD6.

United is warning that its ability to attain a better than flat unit cost performance excluding fuel in 2019 will be negatively impacted if the MAX jets remain out of service and its flights to Delhi from its Newark hub remain suspended longer than the airline expected. The flight suspension was triggered by the closure of Pakistani airspace, and after operating the service with a stop in Germany, United decided to suspend the service.

In mid-Apr-2019 United executives stated that the company expected flights to Delhi to resume in Jul-2019 and its MAX jets to return to service that same month.

As a result of the MAX grounding and the suspension of flights to Delhi, United has trimmed its 2019 capacity guidance by 1ppt to a range of 4% to 5% growth, from an increase of 4% to 6%.

American is also trimming its planned capacity growth for 2019 to 2.5%. It has previously stated that its capacity increase for 2019 would be the lowest in the US industry. Data from CAPA and OAG show that US system ASKs are still growing at a healthy rate in 2019. 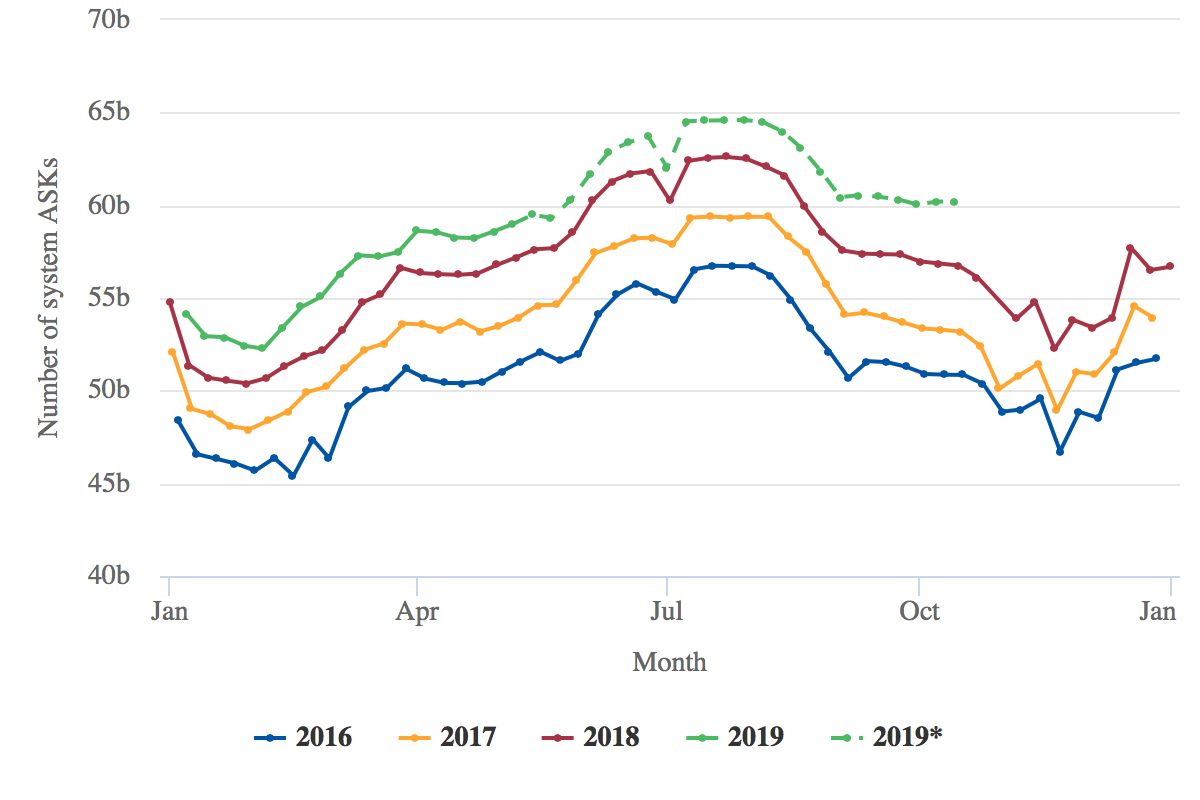 * These values are at least partly predictive up to 6 months from 29-Apr-2019 and may be subject to change.

For now, United is not adjusting its projected EPS guidance of USD10 to USD12 for 2019, and its executives have said that the airline remains confident in its EPS guidance. In late 2018 Delta’s management stated that the company expected an EPS of USD6 to USD7 in 2019, and believed it would deliver on its expectations.

The outlooks for corporate revenue offered by the three large global US airlines are encouraging and the momentum shows no signs of slowing.

For now, American and United are working to mitigate the effects of the grounding of the Boeing 737 MAX, and are likely hoping that they do not have make any more revisions to their 2019 forecasts.