The US ultra-low cost operator Sun Country had a unique model before the COVID-19 pandemic, and the company’s business diversification and its distinct network structure have provided the airline significant advantages during the crisis.

The airline will continue to leverage those advantages, which will result in Sun Country achieving a favourable position as it works to navigate an evolving pandemic.

Sun Country is also is not resting on its laurels; it is laying the groundwork to achieve a competitive cost position and build out its network from Minneapolis.

Charter and cargo are boon for Sun Country in pandemic times

Sun Country forged an agreement with Amazon in 2019 to operate 10 converted Boeing 737-800 freighters on Amazon's behalf and the airline’s fleet for the e-commerce giant has grown from 10, when it started cargo flights in 2020, to 12 aircraft.

The company’s cargo operations represent approximately 16% of its revenue, and charter 20%. One positive aspect of the diversified revenue pool is pass-through of fuel costs – a definite bonus as fuel prices continue to rise.

During a recent investor discussion Sun Country CEO Jude Bricker explained that in the past he had not devoted a lot of commentary to the company’s charter operations. But he emphasised that “our charter business is extremely valuable because it has pass-through economics. It is counter-seasonal to our leisure demand. It's a space where we have significant advantages and namely, we can be more responsive than any other carrier.”

Charter, along with cargo and a recovery in leisure passenger demand, helped Sun Country post nearly $174 million in revenue during 3Q2021, which was broadly a 1% increase over the same period in 2019. The company posted a net income of $14 million, and an operating margin of 13.2%.

Sun Country’s charter revenue of USD33.8 million during 3Q2021 was not back to the same levels as in 2019, but the company’s management cited strong growth in its sports business after signing a five-year deal to be the charter service provider for Major League Soccer (MLS).

Sun Country’s network structure is based on seasonality, reflected in 97% of its markets being seasonal.

The airline's headquarters in Minneapolis is key to that seasonality strategy as the airline targets leisure travellers looking for warm weather spots in the US winter, and visiting friends and relatives (VFR) traffic during other times of the year.

The company highlights that cargo and charter operations peak in the US fall, when leisure passenger demand is weakest.

Sun Country's approach to seasonal demand based on 2019 data 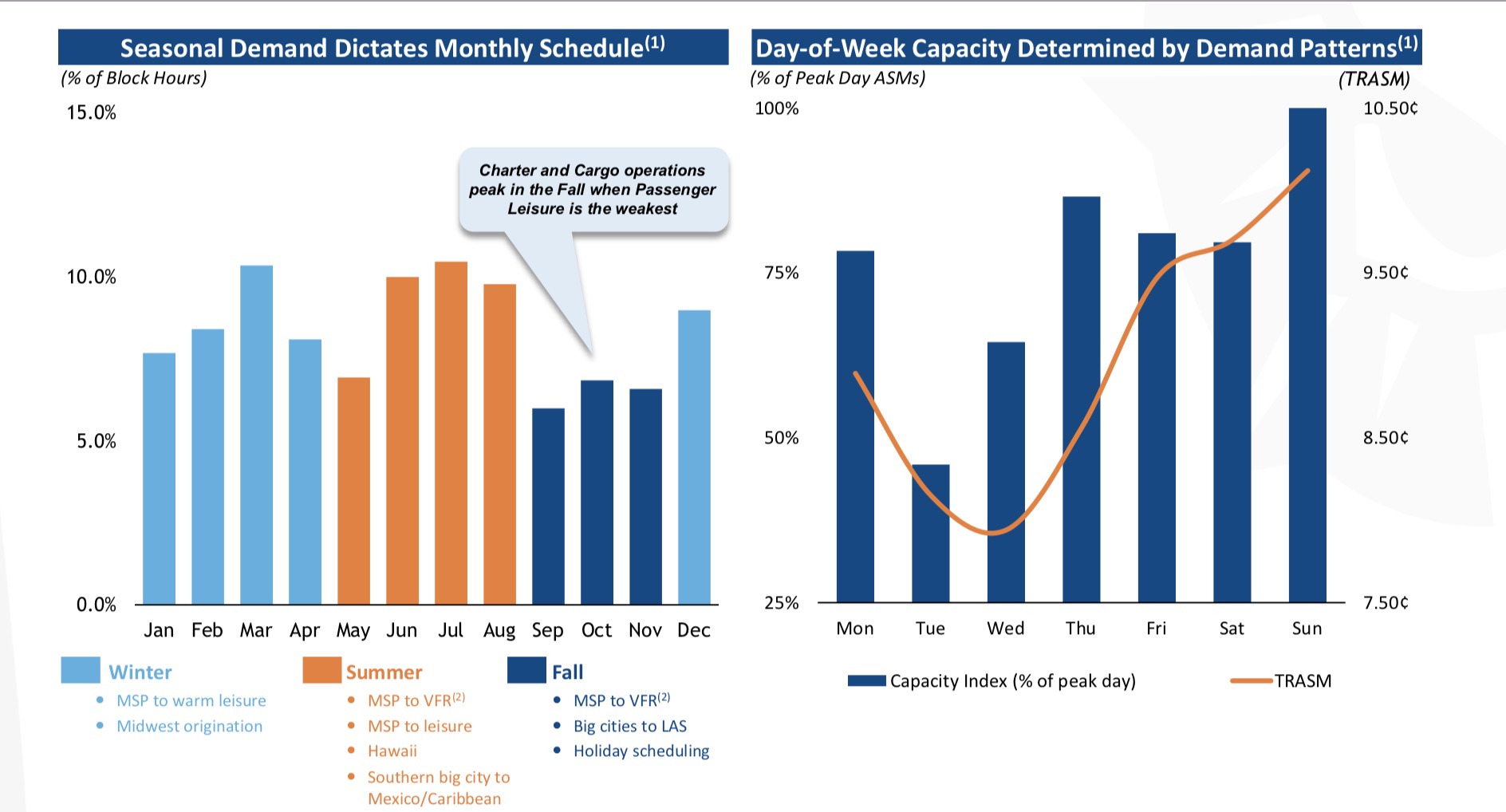 The airline is also working on “building out Minneapolis to its full potential”, said company chief revenue officer Grant Whitney.

Data from CAPA and OAG show that as of late Nov-2021, Sun Country represented 11% of the available seat kilometres (ASKs) at Minneapolis St Paul International airport. 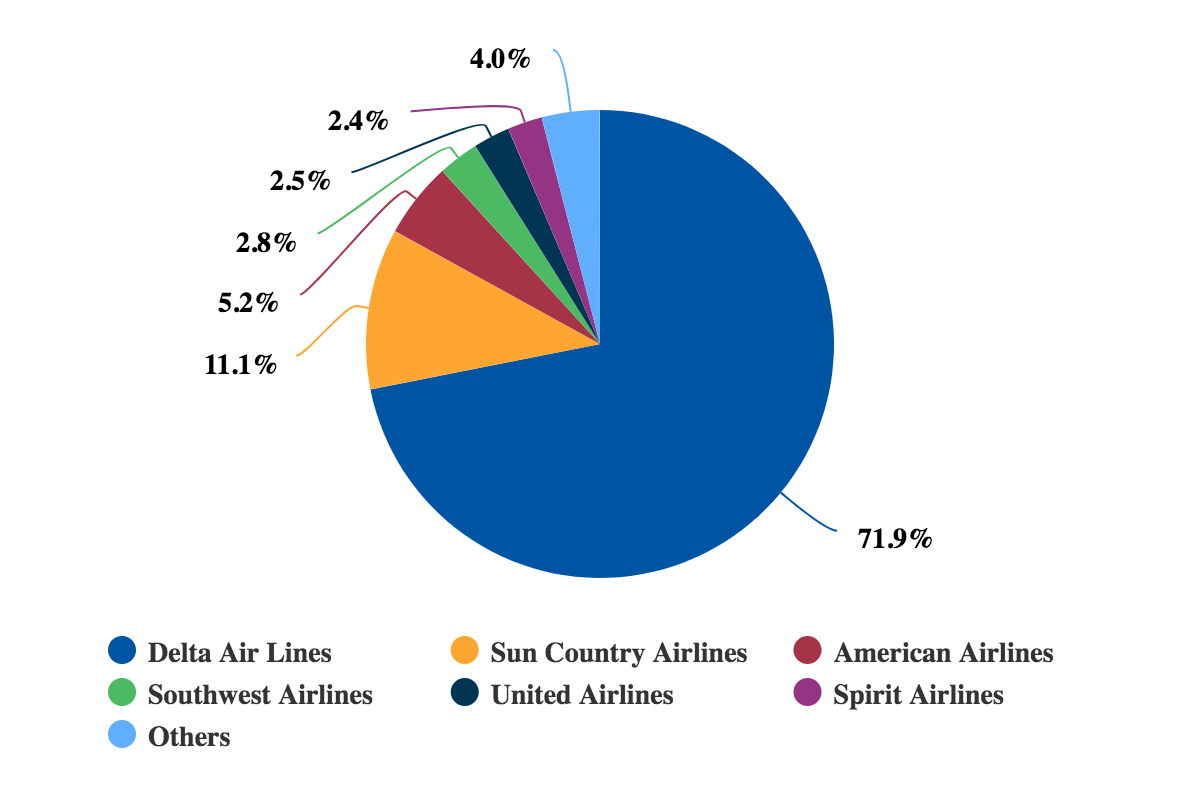 There is likely to be space for Sun Country to grow in Minneapolis without much concern from Delta, which has a hub at the airport. Sun Country’s big focus on seasonal, point-to-point routes is vastly different from Delta’s hub and spoke model.

“I think the other thing to remember is Delta's not going to have 100% of Minneapolis. There's going to be competitors here”, said Sun Country CFO Dave Davis during the CAPA Live Conference in Oct-2021. "And the question is, who do you want those competitors to be?”

Mr Davis explained that Sun Country was disciplined and “we don’t sort of trash the fare environment…I'm not sure if some of our competitors would sort of have the same behaviour here. So, as I said, I think we're pretty complementary with Delta. I mean, we're very careful not to go head-to-head with them. And I think we work together well.”

Essentially, from the Twin Cities [Minneapolis and St Paul], “we want to be the leisure carrier for everybody paying with their own money”, Mr Bricker explained. “And then outside the Twin Cities we want flexible capacity that can bring down fares during peak period in a large city origination market like Dallas.”

Although Sun Country is not immune from the cost inflation that other airlines are facing, it expects 4Q2021 unit costs excluding fuel to be broadly in line with those of 2019.

Mr Bricker explained that Sun Country was continuing work to lower its costs per available seat mile (CASM) excluding fuel to below USD6 cents, which is generally considered the ultra-low cost carrier benchmark. 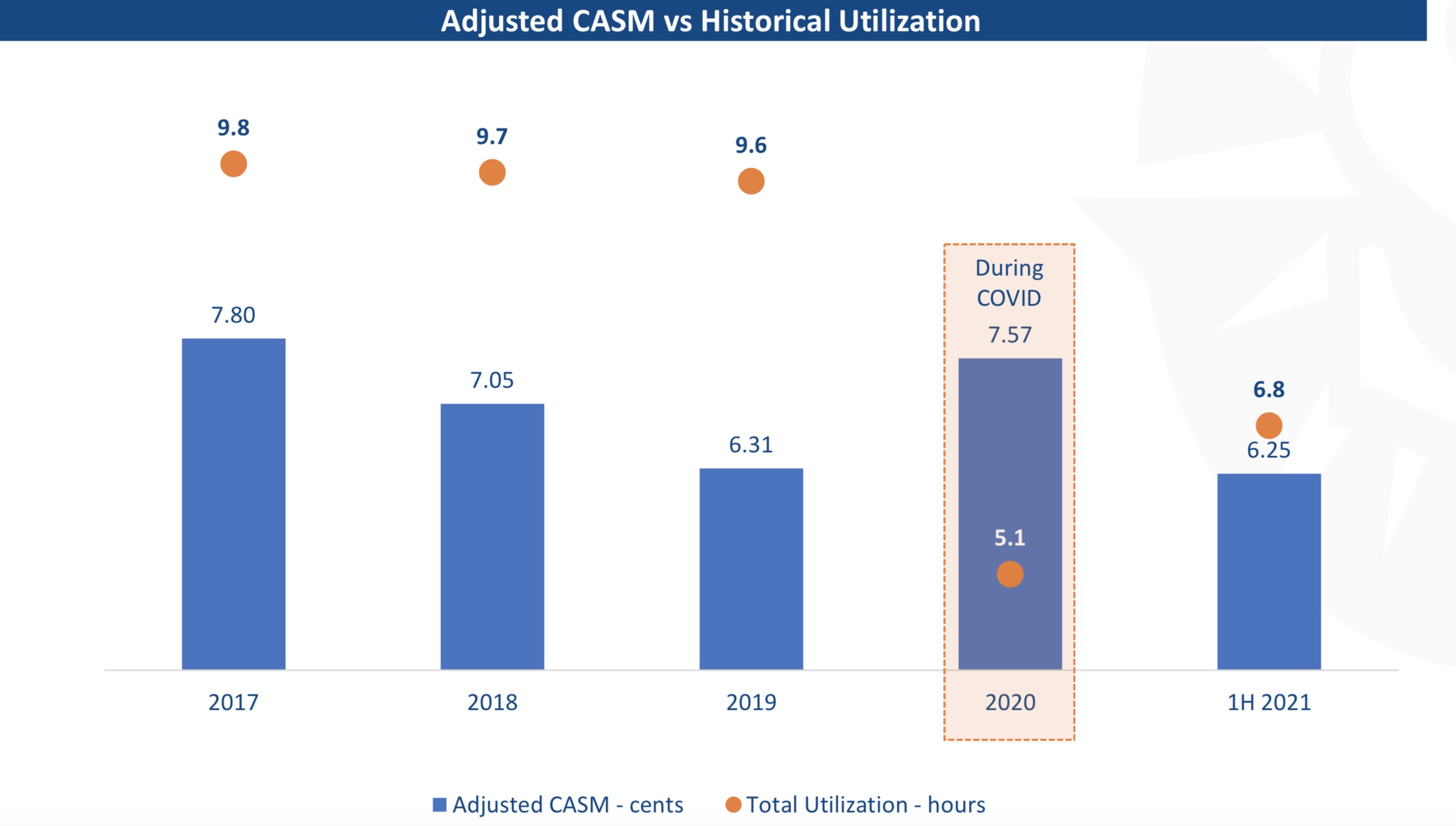 The airline also has the benefit of lower leverage than some of its US airline peers.

During CAPA Live Mr Davis explained that Sun Country had actually lowered its gross debt during the coronavirus pandemic, and that it has a significant cash balance (its liquidity as of 1-Nov-2021 was USD$325 million).

That will be an advantage as Sun Country continues to grow.

The airline is targeting a fleet of 50 used Boeing 737 narrowbodies by 2H2023. CAPA’s fleet database shows the company is operating 47 aircraft, including the 12 freighters used in its Amazon business.  The average age is approximately 16 years, and Mr Davis has stated that Sun Country acquires its aircraft at mid-life and operates the jets for the remainder of their useful life, and then harvests “whatever we can at the end.”

The cost savings associated with that model, said Mr Davis, more than offset what would be the incremental ownership costs of owning new aircraft.

In early Nov-2021 Mr Davis remarked that Sun Country had not really observed any significant tightening in used aircraft pricing; perhaps a bit on the margins, “but nothing significant.”

The used market is “driven by weakness throughout the world. So where we saw now North America and Europe tightening a little bit, Southeast Asia is really weak right now. And so we see a lot of capacity still coming to market from those jurisdictions”, he explained. Prices are still down 25% to 30% relative to pre-pandemic levels, said Mr Davis.

Sun Country better positioned for uncertainty than many others

Sun Country’s management is not blind to the uncertainty that still exists regarding the trajectory of the COVID-19 pandemic.

However, the company’s small and nimble approach has proven to be highly beneficial during the crisis. Even if obstacles arise during the recovery, Sun Country is better positioned to face an uneven recovery than many other operators worldwide.