US airline shares rose on Monday with the wider market, lifting the NYSE Arca Airline Index to a near three-year high.

The value of most airline stocks has almost doubled in the past year as the economy recovers from recession. Shares in AirTran, Southwest, Allegiant and JetBlue all gained yesterday, increasing 2.3%, 2.2%, 1.9% and 1.9% respectively.

Capacity growth within North America for first time since 2007

CEO of OAG parent company, UBM Aviation, Peter von Moltke, said: "North America, the most mature aviation market and until recently the largest, trails all other regions in seat capacity growth. This region is now the third largest aviation market in the world, with combined domestic and international capacity of 99 million seats, falling behind Asia Pacific with 109.6 million seats, and Europe with 105.5 million.”

Crude oil for Sep-2010 delivery rose 3% to close at USD81.34/barrel yesterday on the New York Mercantile Exchange, reaching a 12-week high. It is the first time crude futures have settled above USD80 since May-2010, after strong manufacturing-sector data renewed optimism of a global economic recovery.

Brazilian stocks were among those in Latin American markets that gained on Monday, with the Bovespa Index expanding 1.5%. The Bovespa is now off 0.1% for the year, recovering from a year-to-date loss of more than 15% reached in May2010. Brazilian stocks reported an 11th consecutive session of gain yesterday, on optimism of increased stability in the global economic recovery. Shares in GOL gained 4.3% yesterday. 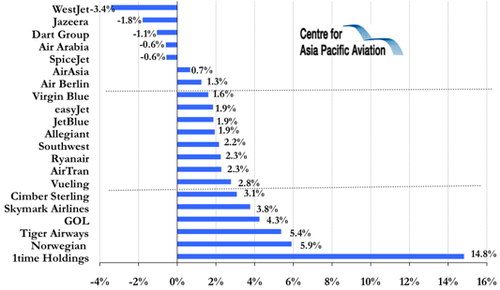