Falls on US and European markets due to concerns over European debt and growth in China, as well as the potential impact of the latest Icelandic volcanic eruption on air travel sent US airline shares lower on Monday. More welcome was the slide in US crude oil prices, which dropped USD2.40 per barrel to USD97.70 on the NYMEX as the US dollar edged higher.

Also making news was an announcement by Delta Air Lines and US Airways that they have reached a new agreement to swap take-off and landing slots at New York LaGuardia and Washington Reagan National airports, revising a 2009 proposed deal that was abandoned after the airlines felt US Department of Transportation restrictions were too heavy handed.

Under the agreement, which would require regulatory clearance, Delta is to acquire 132 slot pairs at New York’s LaGuardia Airport from US Airways, and US Airways would acquire 42 slot pairs at Washington’s Reagan National Airport from Delta. The deal also includes US Airways gaining rights to operate an additional daily service to Sao Paulo in 2015. Delta will pay US Airways USD66.5 million.

Southwest Airlines announced it would be interested in adding slots at both airports and is analysing the regulatory filing with that in mind. 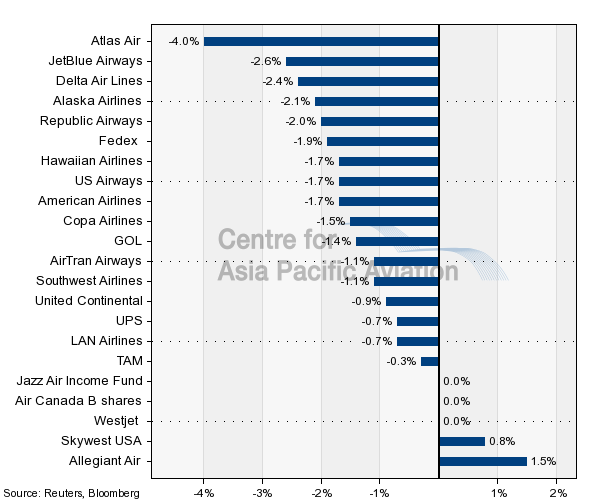