US airline foreign ownership; time for a rethink

Proposed legislation in the US Congress to eliminate foreign ownership restrictions on airlines will no doubt resurrect arguments by labour that foreign ownership could jeopardise national security and the overall integrity of the US airline industry.

Perhaps those age-old arguments by labour groups, led by the Air Lines Pilots Association (ALPA), are as outdated as the ownership laws themselves. Expanding the long term pool of investors for US airlines could broaden the investor base in the US airline industry, which could prove beneficial for airlines constantly battling knee-jerk reactions from Wall Street if they deviate from the current airline playbook.

US airline ownership laws date back to the 1920s, and the country’s restrictions are arguably the most prohibitive in the world. The recent proposal for legislative change, while unlikely to materialise into an actual policy shift, presents an opportunity to engage in meaningful discourse about ownership restrictions in the context of an evolving global airline business.

US Representative Dave Brat, who serves on the bipartisan Travel and Tourism Caucus, introduced legislation to remove ownership restrictions on US airlines. The country’s 25% cap is among the lowest in the world. Canada also has a 25% restriction, but granted exemptions to aspiring ULCCs, pushing the limit to 49%.

The country’s government has vowed to change the foreign ownership caps to 49%; however, no single international entity would be allowed to own more than 25% of a Canadian airline. 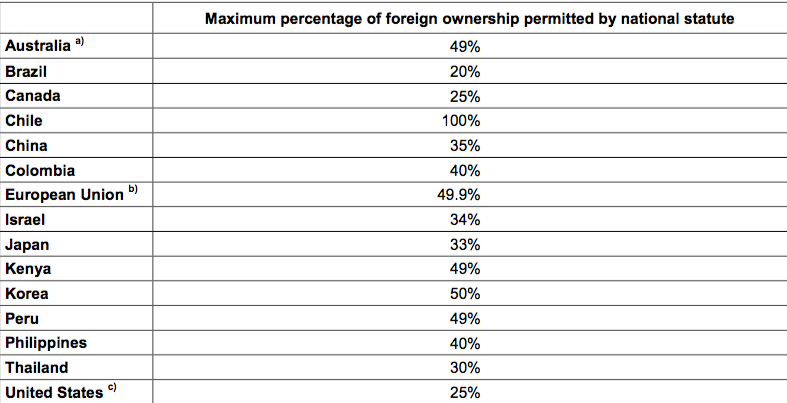 (Note: Australia permits an airline to own 100% of its domestic airlines, other than Qantas which is limited to 49%)

Under Mr Brat’s proposal, foreign owned airlines operating on US domestic routes would be required to set up US subsidiaries and only employ US residents. That provision should allay any concerns that lifting ownership laws would create an influx of cheap labour into the US airline market.

That element of the proposal would also quell concerns always raised by ALPA when changes to US airline ownership are proposed regarding national security.

The union’s long held stance has been current ownership rules ensure US security given the country’s airlines have transport obligations to the US military in times of crisis. “Should ownership or actual control of an airline drift outside of US control, so would these resources”, ALPA states. But if those subsidiaries are staffed with US workers, the arguments of a threat to US security are no longer relevant.

In many ways, it has always been a struggle to establish the merits behind ALPA’s arguments against changing foreign ownership restrictions of US airlines as the industry becomes more globalised, but the latest proposal to alter the regulations renders ALPA’s concerns obsolete.

The Bush Administration in May-2003 also proposed amending the limit

According to a GAO report of 1-Dec-2003 "In May 2003, the Bush Administration proposed amending the legislation that currently restricts foreign ownership of U.S. airlines, raising the allowable percentage of total foreign ownership of voting stock in U.S. airlines from 25 to 49 percent. The Department of Transportation (DOT) suggested that implementing this amendment could provide significant benefits to U.S. consumers and airlines, particularly by providing access to additional capital, which would help the financial health of the industry. DOT and the Department of State also maintain that these new limitations would bring the United States in line with current foreign ownership laws of the European Union (EU)."

The then US The Air Transport Association supported the proposal, which was opposed by most unions, although the Association of Flight Attendants had "a preference that foreign ownership be handled on a case-by-case basis".

The proposal died. Whether or not that was a sound outcome, history shows that all of the US' major airlines except Southwest subsequently folded into bankruptcy or merged over the next dozen years.

Large US airlines are publicly ambivalent about changes to ownership rules, mainly to avoid unnecessary ruffling union feathers. Those companies conclude their immunised joint ventures with alliance partners are essentially virtual mergers, and serve as an adequate stand-in for changes in foreign ownership structure.

But the reality is US airlines operate under a certain level of murkiness as they pursue investments in foreign airlines.

The control element Ownership and Control (O&C) restrictions stems from nationality clauses present in most bilateral air services agreements between states. In essence, the traffic rights granted under these bilaterals require that airlines benefiting from these rights are substantially owned and effectively controlled by nationals of the state in question. Over the years, many airlines have found ways to circumvent airline O&C restrictions.

Over the past 25 years there has also been an increasing number of bilateral agreements which have moved away from the 70 year old O&C restriction, requiring only that the airline's "principal place of business" be in the state of registry. In those cases, there has been no sign of the sky falling just yet.

Delta Air Lines’ 49% stake in Virgin Atlantic is a keen example of a template for who,  in practice, actually owns and controls. The great majority of Virgin Atlantic’s operation is on service between the UK and the US, with the US representing 67% of the airline’s system wide seat deployment for the week of 12-Mar-2018. 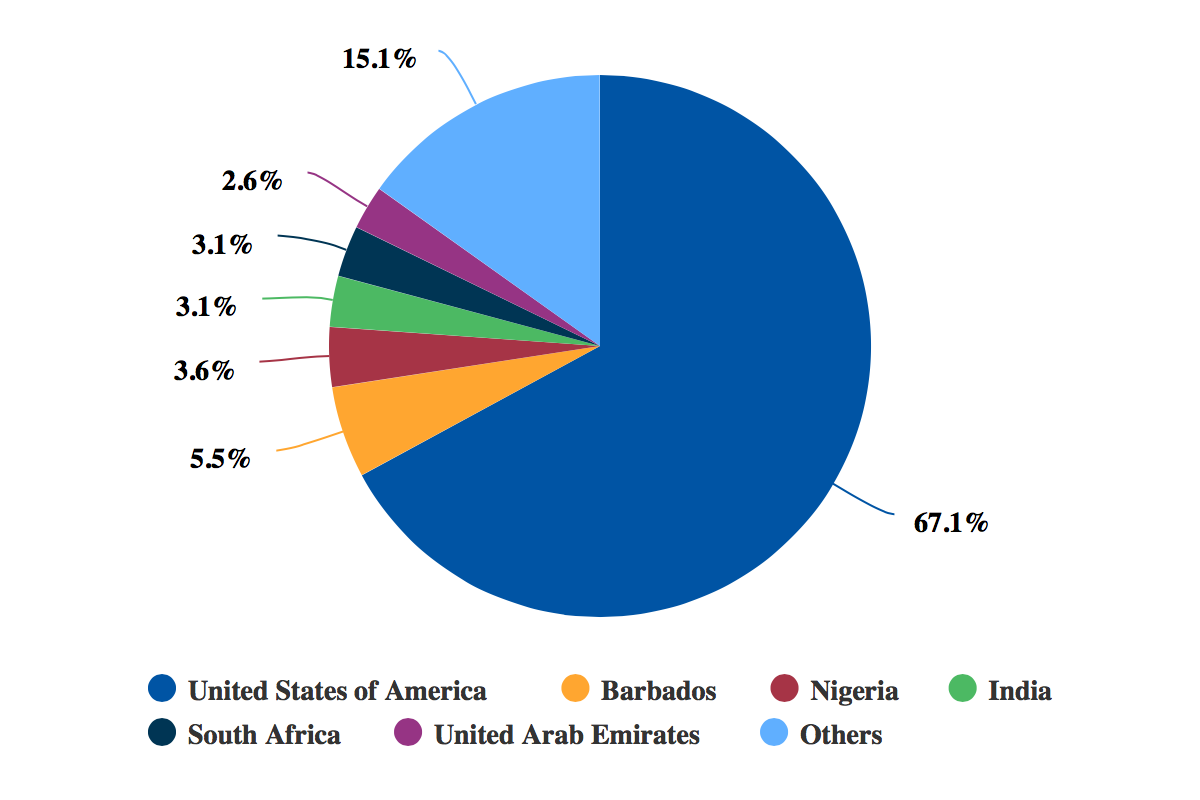 Delta’s 49% stake in Virgin Atlantic complies with EU ownership laws; but effective control of Virgin Atlantic is not so straightforward. Virgin Atlantic’s US routes are operated under an immunised joint venture with Delta, but Delta essentially has control of the JV. Delta's interest in the JV is almost 75%, consisting of its own direct 50% and its 49% of Virgin's 50%.

Delta's superiority in the JV gives it effective control over Virgin Atlantic's biggest business segment and, in the eyes of many observers, it effectively controls Virgin Atlantic as a result. Yet the European Commission (with a liberal bent, leaning towards modern commercial practice and public interest goals) approved Delta's stake in Virgin, and not one European government has raised any objection to the control arrangements.

Neither, seemingly, has any labour union on either side of the Atlantic.

Another, less tangible, but nonetheless valuable contribution that can be delivered by outside interests is the innovation that derives from learning from global lessons. Despite unrestrained attempts to undermine the establishment of Virgin America for whatever reason (but invoking the letter of the century old 25% US ownership legislation), that airline eventually produced a fresh and different model in the US market. It created new employment, a satisfied new stream of customers and even eventually became profitable.

See related report: Airline ownership and control rules: at once both irrelevant and enduring

Aside from the injection of international innovation, Mr Brat concludes his proposal to change US airline ownership laws would stimulate the travel and tourism industry, and increase financial stability for US airlines.

But the likelihood that a change in ownership laws would result in new competitors for existing airlines in the US is debatable, given the maturity of the market. It is not likely that Ryanair or EasyJet would opt to compete with the US big 3, Southwest and ULCCs Spirit and Frontier. But broadening the investor base for US airlines could spur benefits for those operators.

US airlines are essentially beholden to Wall Street, and any time there’s a deviation from what those institutional investors believe is a viable strategy for the market, airline shares tumble.

United’s decision this year to grow capacity faster than GDP (in order to close domestic revenue gaps with its peers) and the ensuing loss in its valuation reflects the short term view most US airline investors hold - and the often misguided control they have over the longer term interests of their airline investments. Of course foreign investors would also want returns, but a more diverse investor base could allow US airlines to withstand some of the whiplash created by Wall Street.

A change in foreign ownership could also allow smaller airlines such as Alaska or JetBlue to partner with foreign airlines to combat the concentration held by JVs created by members of the oneworld, Star and SkyTeam alliances. Lifting foreign ownership caps could also result in opaque JVs being replaced with actual mergers that arguably have more transparency.

At the very least, increasing US airline ownership to 49% allows a certain level of reciprocity as US airlines uitlise more lenient ownership restrictions to build and (arguably control) foreign airlines.

As well as its Virgin Atlantic ownership, Delta also holds a 49% stake in Aeromexico, and the two airlines operate a transborder joint venture. Indeed, when Delta outlined plans to expand its stake in Aeromexico it cited an opportunity to enhance both Delta and Aeromexico’s performance, and “bring our coordination and experience to help them [Aeromexico] improve their business model”.

It seems logical that global airlines should have the same opportunities to help US airlines improve their business strategies. Faded arguments about US airline resources drifting outside US control are today no than an old slogan that has long since lost any meaning.

The latest proposal to lift all foreign ownership restrictions on US airlines is unlikely to gain traction in its current form; wiping out all restrictions is essentially a non-starter.

But an opportunity to spark a meaningful discussion about raising limits is long overdue.

Labour groups often tout their work to ensure a healthy US airline industry, and the contributions employees have made to the industry’s current level of sustained health deserves recognition.

However, broadening the capital base of US airlines would give those operators a major advantage in extending their current profitability streak, which is a win-win for the industry and labour.

To hear more on the state of the US aviation market, join us in Denver (18-19 March), at the 2019 Americas Aviation Summit. Click here for details.