The start-up LCC Akasa Air has cleared the final regulatory hurdle before beginning operations and plans to grow its fleet quickly.

Air India appears to be close to placing long-overdue orders for fleet renewal, while Jet Airways is also evaluating aircraft deals to relaunch and grow its operations.

These moves closely follow the announcement of significant leadership changes for Air India and the country’s largest domestic airline, IndiGo.

Such developments reinforce the fact that India is one the industry’s most dynamic airline sectors in 2022.

Akasa has been gradually moving through the myriad steps required to begin operations.

These efforts culminated in the airline gaining its air operator's certificate (AOC) from India’s Directorate General of Civil Aviation (DGCA) on 7-Jul-2022.

The LCC can now offer its flights for sale and intends to launch its first scheduled flights in late Jul-2022. It has already operated proving flights as part of the approval process.

If Akasa does launch this month, it would not be too far off its original target of entering service in the first half of 2022 – which is impressive, considering most start-ups take much longer than anticipated. 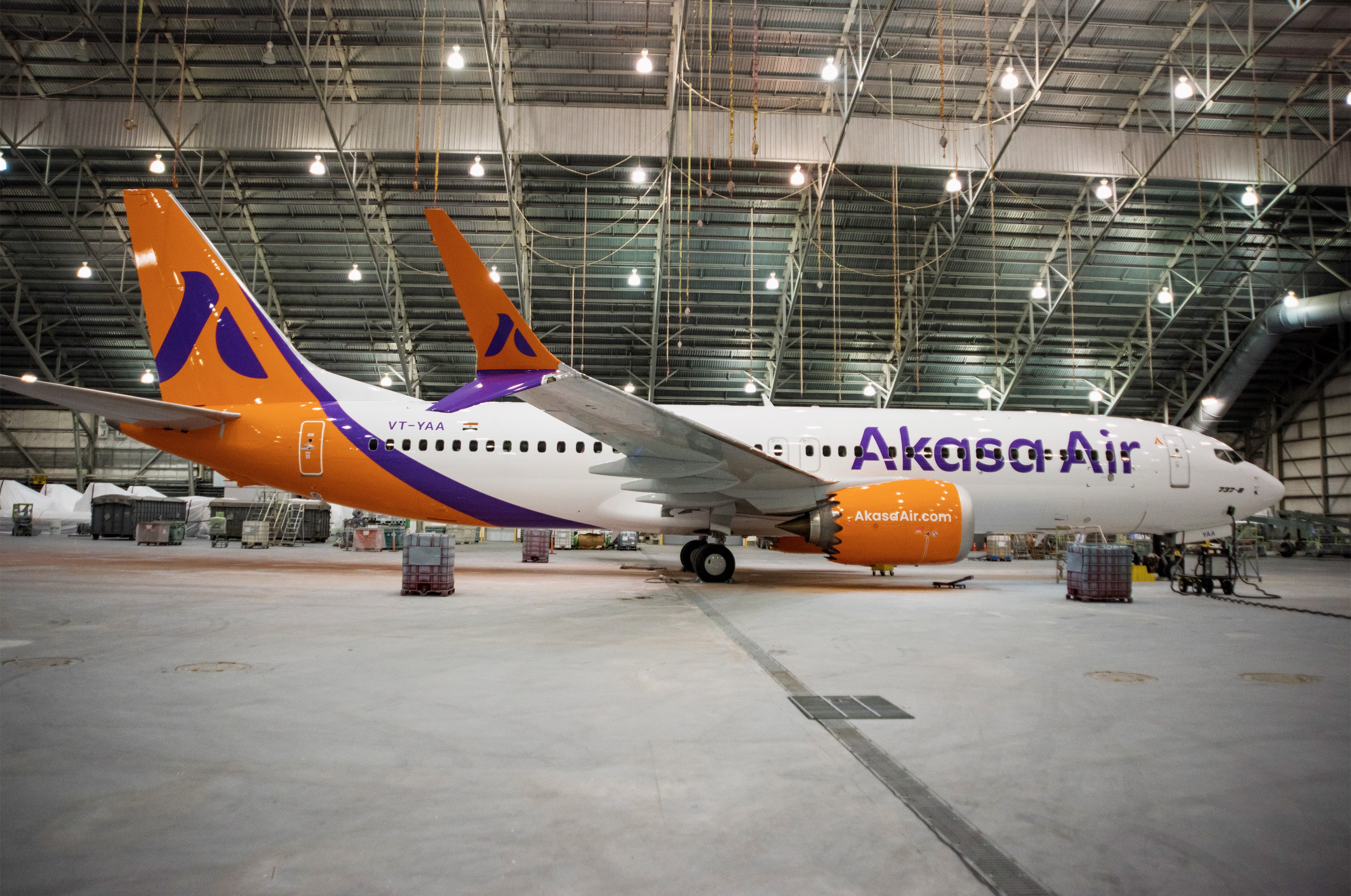 Akasa will use Boeing 737 MAXs, with the first having arrived in Jun-2022. The airline expects to have two flying by the time it begins service and plans to add more aircraft every month, drawing from the 72 MAXs it ordered in Nov-2021.

Akasa intends to have a fleet of 18 by the end of Mar-2023, adding another 12-14 every 12 months after that. This would mean that all of its orders would be delivered over five years.

The airline is entering an Indian domestic market that is already dominated by LCCs. The chart below shows that LCCs currently account for nearly 80% of India’s domestic capacity. 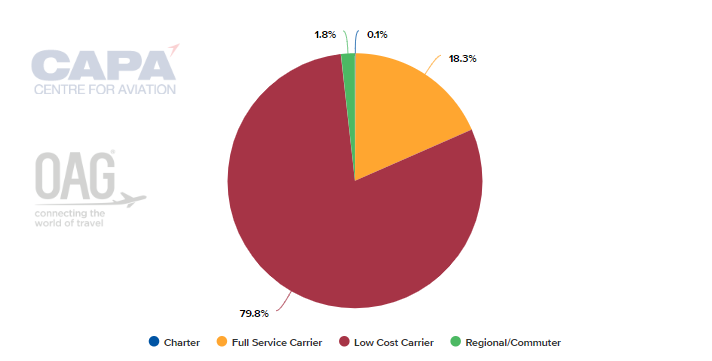 IndiGo is the main player by far, but other Indian LCCs include Go First, Spicejet, AirAsia India and Air India Express.

AirAsia India and Air India Express are expected to merge, but this shows that Akasa is still entering a fairly crowded sector.

India’s domestic LCC capacity, by airline, for the week of 11-Jul-2022

Air India and Jet Airways are expected to place orders for hundreds of aircraft as they look to the next phases of their fleet development.

Jet Airways has yet to resume operations after relaunching under new owners. Almost all of its aircraft were repossessed by lessors after the airline was grounded in 2019, and the owners have said they are looking to order aircraft to support growth plans. Executives have signalled that they are discussing a large narrowbody order with manufacturers – although in the short term Jet Airways could lease aircraft to enable them to launch operations this year.

Jet previously operated Boeing 737s, but has not revealed which manufacturer it will choose for its future narrowbody fleet.

Air India is believed to be close to placing even larger orders, including narrowbodies and widebodies. This will be a priority for the airline’s new owner Tata Group, as Air India currently has no aircraft on order to replace ageing fleet types.

Various news outlets are reporting that Air India is considering a narrowbody order ranging from 100-300 aircraft. The airline is also believed to be preparing to order widebodies, and a memo to pilots appears to indicate that the Airbus A350 is the leading contender.

CAPA’s fleet database shows that Air India currently has almost 70 Airbus narrowbodies (in service and inactive), although 27 of these are relatively new A320neos.

The airline’s widebody fleet includes 16 Boeing 777s, with an average age of about 13 years, and 27 787-8s. The airline also has four 747s, although these have been grounded for some time and are not expected to return to service with Air India.

The scale of the upcoming – and recent – orders will no doubt influence the future Airbus/Boeing market share in India.

The chart below shows that Airbus aircraft currently represent 79% of the narrowbody jets in service operated by Indian airlines.

India’s narrowbody aircraft in service, by manufacturer, for week of 11-Jul-2022

IndiGo, Go First and Vistara all have A320neo-family aircraft on order, whereas Akasa and Spicejet have ordered Boeing MAXs. If Jet Airways and Air India select Airbus, it would further increase the Airbus share of India’s narrowbody orders.

India’s narrowbody aircraft orders, by manufacturer, as of 11-Jul-2022

The picture is very different in the widebody market.

Boeing aircraft represent 100% of India’s widebody fleet, and also all of the existing 15 widebody orders. An A350 order by Air India would obviously eat into Boeing’s share in this market sector.

Fleet renewal and growth have re-emerged as post-pandemic priorities

Order decisions that are likely to be made this year will have a major influence on India’s commercial aircraft fleet in the long term.

The fact that airlines – including those in India – are considering aircraft orders again is a sign that the industry is confident that the post-COVID-19 recovery is well under way. With fleet decisions having been delayed for the past few years, ordering replacements has become even more of a priority now.

This is particularly true of Air India. The airline had avoided placing orders even before the COVID-19 pandemic, due to uncertainty over its ownership and its mountainous debt. With new investors, the time is right to address fleet needs.

Upcoming deals are likely to boost India’s narrowbody order total beyond 1,200 aircraft. This demonstrates the faith airlines have in the potential for continued rapid growth in the Indian travel market.