The AMEX Airline Index slumped 8.3% on Thursday (01-Oct-09), as United Airlines' stock collapsed by 21.5%. Stocks were affected by a weak reading on US manufacturing, stoking fears the market may have risen too far too fast. The Dow (-2.1%) ending trading down heavily.

Analysts Jesup & Lamont released its 3Q2009 Earning Preview for US carriers during trading. The analysts stated they believe the carriers have seen the market bottom out, and the outlook for 3Q2009 is for an aggregate total of about USD30 billion in revenue, an operating profit of approximately USD600 million and a net loss of about USD400 million. (All numbers exclude non-recurring charges/gains and out of period mark-to-market hedge gains/losses).

In related news, analysts at Stifel, Nicolaus & Co stated they remain cautious of the airline industry’s revenue for the remainder of 2009 and into 2010. The analysts stated “we believe investors might be anticipating a V-shaped recovery in airline pricing even with an underlying U-shaped economic recovery. We aren't saying this can't happen, we're just saying it has never happened, so those who anticipate such a scenario are effectively saying 'this time is different.'"

Continental Airlines (-8.3%) announced its Sep-2009 traffic results after trading, reporting a 6.3% year-on-year increase in passenger traffic, to 4.7 million. Traffic (RPMs) rose 7%, while capacity was reduced by 5%, leading to a 5 ppts increase in load factor for the month, to 81.5%, led by a 7 ppts increase in trans-Atlantic load factor. 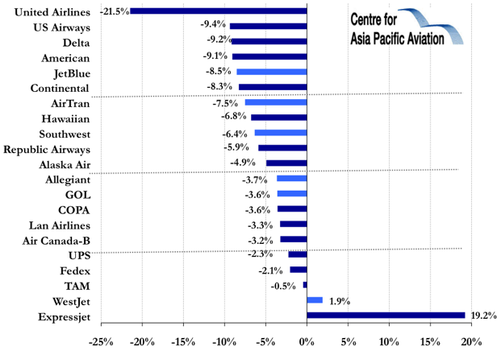